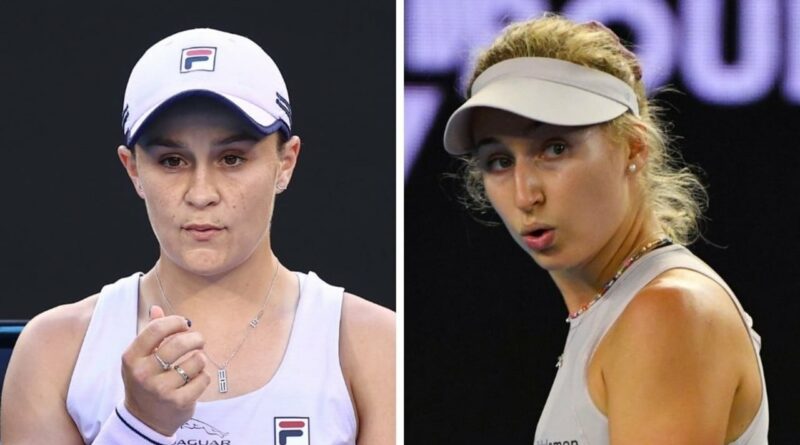 Ash Barty’s second round opponent at the Australian Open, fellow Aussie Daria Gavrilova, has offered a peek into the aura surrounding the world number one.

Barty, 24, has become one of the most popular athletes in the country while soaring to the top of world tennis, showcasing a humble and likeable personality.

But there’s still a pecking order in the changerooms and Gavrilova, 26, admitted to being fearful of asking her compatriot for a lift home after training recently.

She quickly learned she had no reason to be afraid.

“I have a lot of respect for Ash,” Gavrilova said, after winning her first round match against Spain’s Sara Sorribes Tormo to book a spot in the final 64.

“You know, she was training at Xavier (College) while the internationals were in quarantine, and me and Luke (her husband and fellow tennis pro Luke Saville) are sharing one car and he left …

“She’s incredible,” Gavrilova said. “She’s someone if we travel, she’s the first one to find a good coffee shop. She’s a morning person, I think. She loves her coffee.

“We are definitely completely different personality. Like complete opposite. But we get along on tour, and yeah, she’s definitely someone I look up to.”

Gavrilova will have her hands full on Thursday after Barty crushed her first round opponent Danka Kovinic 6-0 6-0 in just 44 minutes.

Barty won 50 points and lost only 10 all match. That’s less than a point a game.

Amazingly, she won the first 16 points of the contest as she bounded towards the history books, becoming the first Australian since Wendy Turnbull in 1985 to win an Australian Open match 6-0 6-0. It was also Barty’s first double bagel at a grand slam.

“I wanted to go out there and almost take the sting, take the pepper out of the match a little bit and get it on my terms as much as possible right from the get-go and make it feel like she had a real mountain to climb,” Barty said.

“I think that was probably the most pleasing overall is that right from the start I set the tone and was able to run away with it.

“I think the processes and the things we go through before a match and trying to execute that, that’s always a challenge. I felt like tonight I had that spot on, which was really pleasing, to be able to roll with the momentum throughout the whole match was really good.”

The 24-year-old spent much of last year at home in Queensland after COVID-19 hit, opting to sit out the entire season even when the WTA Tour restarted.

It meant she gave up the chance to defend the French Open crown she won in 2019, and Barty is thrilled to be back competing for trophies again.

“Every single day,” Barty said when asked if she’d missed playing. “The competitor in me missed what this is all about.

“That’s what I missed the most — coming out here and really enjoying the thrill of the fight.

“We’ve got crowds, that’s the bonus of the next few weeks, we’ve got people to enjoy it with us and that’s the best part about it.”