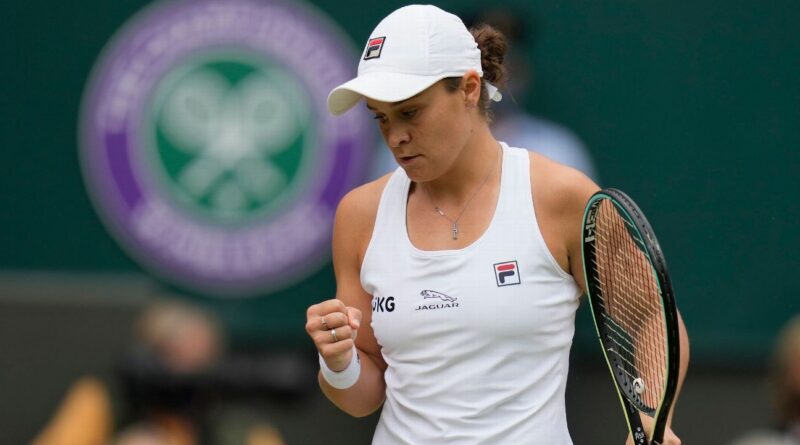 Ash Barty got off to a perfect start in the Wimbledon final by collecting the first 14 points, then needed to hold off a comeback bid before beating Karolina Pliskova 6-3, 6-7 (4), 6-3 on Saturday for her second Grand Slam title.

“It took me a long time to verbalize the fact that I wanted to dare to dream it and say I wanted to win this incredible tournament. … I didn’t sleep a lot last night. I was thinking of all the what-ifs,” Barty said. “But I think when I was coming out on this court, I felt at home, in a way.”

The top-seeded Barty, who won the French Open in 2019, became the first Australian woman to win the Wimbledon title since Evonne Goolagong in 1980. Barty said she has been inspired by Goolagong and wore an outfit at Wimbledon that was a tribute to the dress Goolagong played in when she won the tournament for the first time in 1971.

“Evonne is a very special person in my life,” Barty said. “I think she has been iconic in paving a way for young Indigenous youth to believe in their dreams and to chase their dreams. She’s done exactly that for me as well.”

The eighth-seeded Pliskova didn’t win a single point in the first three games of the first set and then double-faulted on break point to hand Barty a 4-0 lead. She finally held serve for the first time to make it 5-3 before Barty served out the set.

Things were tighter in the second set before Barty broke Pliskova in the match’s first deuce game to take a 6-5 lead. But Pliskova broke back to force the tiebreaker — the final’s first since Venus and Serena Williams in 2009 — and then the first deciding set in the Wimbledon women’s final since 2012, when Serena Williams defeated Agnieszka Radwanska.

Barty, who improved to 6-2 in career meetings with Pliskova, found her form again in the third set, racing out to a 3-0 lead before closing out the match and championship on serve.

Both women were making their first appearance in a Wimbledon final, the first time that had happened since 1977, when Virginia Wade defeated Betty Stove. Neither Barty nor Pliskova had made it past the fourth round at the grass-court major until this year.

Pliskova was seeking her first Grand Slam title. She lost in the US Open final in 2016.

“I was fighting very hard to make it difficult for her,” said Pliskova, a former No. 1 who got choked up during the trophy ceremony and said to the capacity Centre Court crowd: “I never cry. Never.”

A junior champion at Wimbledon a decade ago, Barty left the tennis tour for nearly two years in 2014 because of burnout. She played professional cricket back home then eventually decided to return to her other sport.

Saturday’s match was played under a cloud-filled sky and with Centre Court’s retractable roof open despite rain in the forecast for much of the afternoon. Because of the threat of showers, Barty and Pliskova shared a warm-up session under the roof at No. 1 Court earlier in the day, at times standing side-by-side while hitting shots.

They shared some smiles and chatter during the coin toss before the final, but once things got serious, Barty was not messing around one bit.

Right from the get-go, there was not a hint of uneasiness or uncertainty for Barty. Her strokes were confident. Her demeanor too. During the match-opening run that put her up 3-0, love-30 and, after Pliskova finally won a couple of points, 4-0 after 11 minutes, Barty showed off every bit of her versatility and varied skills.

She returned Pliskova’s speedy serves — the ones that produced a tournament-high 54 aces entering Saturday — without any trouble. She lobbed Pliskova, who at 6-foot-1 is 8 inches taller than the 5-5 Barty, to win a point. She hit winners with her heavy topspin forehand and set up others with her sliced backhands. She threw in an ace of her own and actually finished with more than Pliskova, 7-6.

“She didn’t really miss much. She played everything super deep,” Pliskova said. “I think it was tough for me to really play my game in that moment.”

A key stat by the finish: Barty won 22 of 31 points that lasted nine strokes or more.

As balls flew past Pliskova, and the murmuring in the full-capacity stands reached a crescendo — “What is going on? Is she going to win a point?” — she watched with little more in the way of reaction than a blank stare. Sometimes, she fiddled with her racket strings as if wanting to be anywhere else, admitting afterward “I didn’t feel like I [wanted] to be there.”

Pliskova’s coach, Sascha Bajin, who previously worked with Naomi Osaka and before that was Serena Williams’ hitting partner, sat in the guest box above one baseline with arms crossed and brow furrowed.

Even after Pliskova straightened things out, the rhythm of the first set was odd: A total of six games were won at love.

Pliskova finally got the measure of her strokes in the second set, in which she twice trailed by a break before pulling it out.

“She dug deep,” Barty said, “and found a way to claw herself back into the match.”

That could have shaken Barty, except she speaks clearly about never letting anything get her too down, including the hip injury that knocked her out of the French Open this year and prevented her from her usual preparation for Wimbledon.

And so, with her typical grit, Barty managed to get back to the steadier version of herself down the stretch. When she got a second chance to serve it out, Barty didn’t flinch, even when she had to stare down a break point.

A missed backhand by Pliskova removed that threat, and Barty then delivered a 108 mph ace. One last backhand miss from Pliskova ended the match, and Barty crouched at the baseline and covered her face with her arm.

“I was really proud of myself,” said Barty, who climbed her way up the stands to hug her coach, Craig Tyzzer, and others, “the way I was able to reset and just keep going, just keep chipping away, at the start of that third set and hold my nerve there in the end.”

LTA blasted as Andy, Jamie and Judy are left out of glossy relaunch 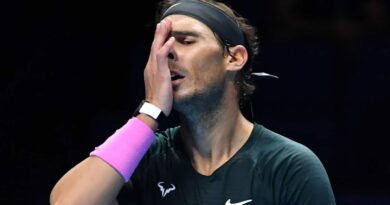