Home » Tennis » Barty question that made Patty Mills ‘choke up’

Barty became the first Australian woman since Evonne Goolagong Cawley in 1980 to win Wimbledon when she defeated former world No. 1 Karolína Plíšková in three sets on Saturday night (AEST).

After Australia’s thrilling victory over Argentina in the warm-up series before the Tokyo Olympics, Mills was asked for his thoughts on Barty’s victory. The San Antonio Spurs star became emotional when wording his response.

Like Barty, Mills is an Indigenous Australian, and he said for the 25-year-old to take out top honours at Wimbledon during NAIDOC Week was “just incredible”.

“This is special, this is goosebumps-type stuff. I’m getting emotional more for that than our game,” Mills told reporters after the Boomers’ 3-point win on Sunday (AEST).

“Ash Barty, just incredible … Amazing. 41 years since the last Australian woman to win Wimbledon and that was Evonne Goolagong Cawley.”

“And she does it in a dress that’s inspired by her idol in Evonne, during NAIDOC Week.

“There’s all these things that just give you goosebumps when you’re talking about it.

“Amazing inspiration for everyone in Australia, especially for Indigenous Australians. Like I said, I even choke up a little bit thinking about it. She’s amazing.”

I got asked post game tonight about Ash Barty’s Wimbledon victory and immediately got the biggest rock in my throat and what felt like a million goosebumps.

So proud of you @ashbarty. You continue to impact people in ways you can’t even imagine. Big big fan!!! pic.twitter.com/uHqFWMl600

Barty was emotional herself after winning her second Grand Slam Singles victory on Saturday night.

“Australians have such a rich history in sport,” Barty said.

“Being able to be a very small part of that is something I always dreamt of, to try and create a legacy, a path for young girls and boys to believe in their dreams. Learning my lessons along the way has been one of the best parts of my journey.

“To achieve my biggest dream, has been absolutely incredible.

“The stars aligned for me over the past fortnight – incredible. That it happened to fall on the 50th anniversary of Evonne’s first title here, too, is absolutely incredible.”

The 2020 Olympics will mark the second time Australia has had two flag bearers, with Mills and swimmer Cate Campbell sharing the honour.

Campbell is set to become the first female swimmer named as Australia’s flag bearer for the opening ceremony, and like Mills, will be competing at her fourth Olympic Games.

Mills’ Boomers face Nigeria, Italy and Germany in the group phase at the Olympics in the hopes of progressing to the finals and improving on their fourth-place finish in Rio.

Alongside Mills, the stacked Aussie squad for the Games features the likes of NBA stars Dante Exum, Aron Baynes and Joe Ingles. Chris Goulding, Nathan Sobey and Jock Landale are among the NBL contingent to have been picked.

3x NBA All-Star Ben Simmons is a notable omission from the squad, with the 24-year-old opting to sit the Games out in order to focus on developing his basketball skills.

Wimbledon 2019: Roger Federer will play Rafael Nadal in the semi-finals 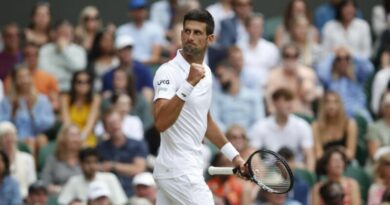