Ashleigh Barty has won the Newcombe Medal for a third consecutive year, matching the record of compatriot and inaugural recipient Sam Stosur.

The accolade is the latest achievement in a brilliant 2019 season for 23-year-old Barty, who is the first Australian woman to finish as a year-end World No.1 and break through for her maiden major triumph at the French Open. 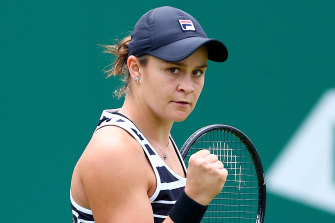 John Newcombe, whom the award is named after, presented Barty with the medal that is considered the highest individual honour in Australian tennis.

Barty was considered a lay down misere to win the Newk – awarded annually to the nation's most outstanding elite tennis player and ambassador for the sport – and there was no shock boilover on Monday night.

Also recognised for his role in Barty’s remarkable rise and rise since returning to the sport three years ago after a sabbatical was her coach, Craig Tyzzer, who won the coaching excellence performance award.

Stosur, who alongside Barty has one major title to her name after winning the 2011 US Open, was presented with Tennis Australia’s spirit of tennis award. Stosur won the first Newcombe Medal nine years ago and again in 2011 and 2012.

Barty has had time off since she headlined Australia's ultimately unsuccessful attempt at winning the Fed Cup in Perth last month. She will start her 2020 season in her home town at the Brisbane International in early January before setting her sights on the Australian Open at Melbourne Park where she will strive to become the first local winner – either male or female – in more than 40 years.