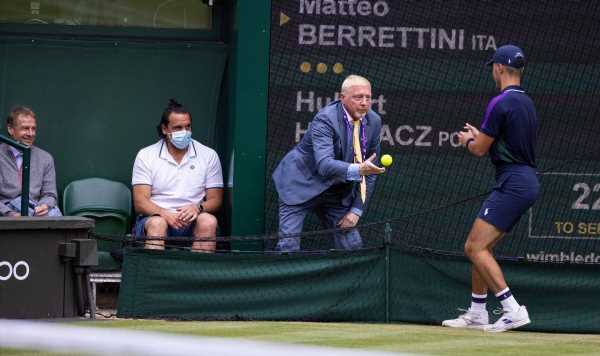 Tennis legend Boris Becker is set to return to punditry duty at the Australian Open following his release from prison – but he will not be on the box at Wimbledon in July. Becker, 55, served eight months behind bars for financial offences, including hiding assets relating to his bankruptcy, and was released in December.

Becker was deported back to Germany as part of a scheme to allow foreign criminals to be released back to their home country.

He has landed a new role already, as an analyst for Eurosport Germany’s coverage of the Australian Open when it gets underway in Melbourne on January 16. Becker is also set to feature on the British coverage of the competition as he “contributes views and analysis to an international audience at key moments”.

But he will not be back on the BBC at Wimbledon in the summer as he remains barred from the UK due to terms of his deportation. The German is not allowed to re-enter for a currently undetermined period of time and that will certainly not expire before the summer, reports the Mail.

Becker first started with the BBC in 2002 and has been a regular feature of their Wimbledon coverage since, alongside the likes of John McEnroe and Sue Barker, who quit the channel last year.

Three-time Wimbledon winner Becker had lived in the UK since 2012 but is set to remain in his native Germany for the foreseeable future. The competition at the All England Club will take place between July 3-16, with the BBC again providing coverage on a daily basis.

The news comes after Becker reflected on a tough year, admitting he has suffered a “very expensive and very painful” lesson during his prison nightmare.  “I wasn’t called Boris, I was a number. And nobody gives a s*** who you are,” he recalled to German broadcaster Sat 1.

“The whole thing has taught me something very important and worthwhile. And some things happen for a good reason.”

He later sent a New Year message to his followers on social media, adding: “I call this the most difficult year of my life,” he said. “But it’s done, it’s dusted. I came out alive – I think I came out stronger. I think my mental health is better than ever.”

The Australian Open will get underway in Melbourne on January 16 with the returning Novak Djokovic among the favourites after the Serb missed last year’s competition due to his vaccination status.