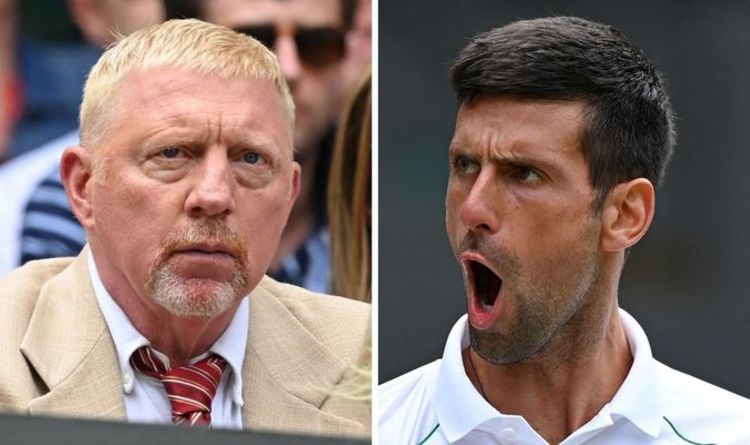 Novak Djokovic remains the strong favourite to win the title at Wimbledon this weekend, but Boris Becker feels there is a fight the world No 1 “might never win”. Djokovic has dominated the Grand Slams in 2021 so far, winning in both Australia and Paris.

His victory at the French Open put him just one behind the record held by Roger Federer and Rafael Nadal with his 19th Grand Slam.

And the Serbian tennis superstar once again looks unstoppable at Wimbledon so far.

He’s not lost at SW19 since 2016 and is aiming to win his third consecutive Wimbledon title.

Only Bjorn Borg, Pete Sampras and Federer have managed that feat in the Open era.

It could be the latest in a long line of records Djokovic will potentially break before the time he calls time on his career.

But, at 34 years of age, Djokovic is showing no signs of slowing down and is the strong favourite to finish with the most Grand Slam wins.

He’s made no secret of his desire to end his career with all the records and be regarded as the greatest of all time.

However, Becker still believes that Djokovic lingers behind both Nadal and Federer when it comes to who is the most popular tennis icon.

And the three-time Wimbledon champion doubts that will ever change for Djokovic in the future.

“He’s certainly one of the greatest players of all time, and more,” he said on BBC.

“On the popularity scale, Federer and Nadal are more popular and that’s the battle he might never win.

“Does it bother him? At times. Has he gotten used to it? At times.

“Ultimately, this is the biggest stage we play on and we want to be loved and respected by everybody that is watching us.”

Djokovic is also on course to become the first male player in history to win the Golden Slam.

Djokovic plans to go to the Olympics later this month where he will be bidding for the gold medal.

It’s the only major achievement in Djokovic’s career that he’s yet to conquer with his bronze medal from the 2008 Olympics his best result at the major sporting event.