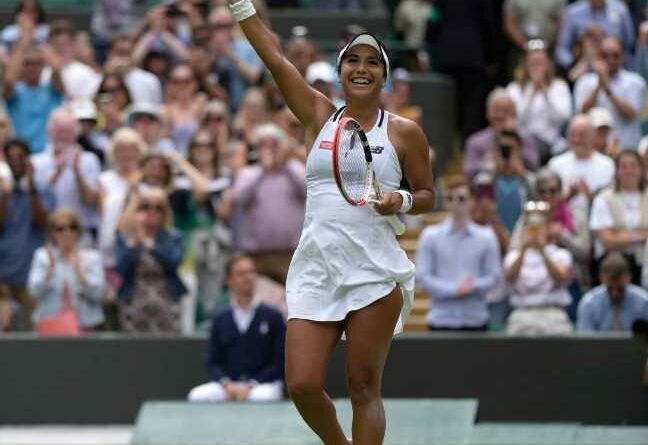 Heather Watson has been through a lot at Wimbledon, and now she has made it through the third round for the first time. Fifth-seeded Maria Sakkari, however, was eliminated.

The 121st-ranked Watson, making her 12th appearance at the All England Club in London, advanced to the fourth round Friday by beating Kaja Juvan 7-6 (6), 6-2.

“I know I’m not speechless because I’m blabbing on, but I don’t know what to say,” the 30-year-old Watson said on No. 1 Court. “Playing here at home in front of all you guys, the atmosphere is everything. So, please, can all of you come back for my fourth round?”

Sakkari, who reached the semifinals at both the French Open and US Open last year, lost to Tatjana Maria of Germany 6-3, 7-5.

Before Andy Murray won the men’s title, the talk among locals would endlessly focus on Fred Perry and Virginia Wade, the most recent British singles champions at the All England Club.

Murray ended some of that in 2013, becoming the first British man to win the Wimbledon title since Perry in 1936. Wade, in 1977, remains the last female British champion of the grass-court Grand Slam tournament.

“I actually wasn’t that nervous,” said Watson, who had lost in the first round six times since making her Wimbledon debut in 2010.

Maria’s win over Sakkari advanced her to the fourth round at any Grand Slam for the first time. Sakkari made 30 unforced errors against her German opponent, who will next face 12th-seeded Jelena Ostapenko. The 2017 French Open champion beat Irina-Camelia Begu 3-6, 6-1, 6-1.

Who has won most Grand Slams in men’s tennis? Explaining why Novak Djokovic is close to making history at US Open