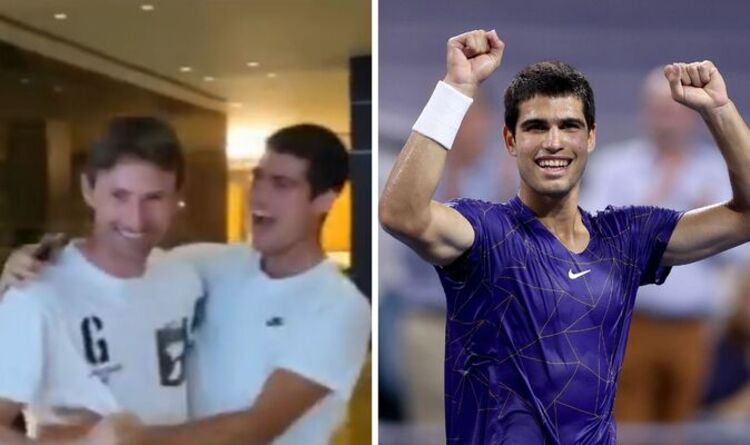 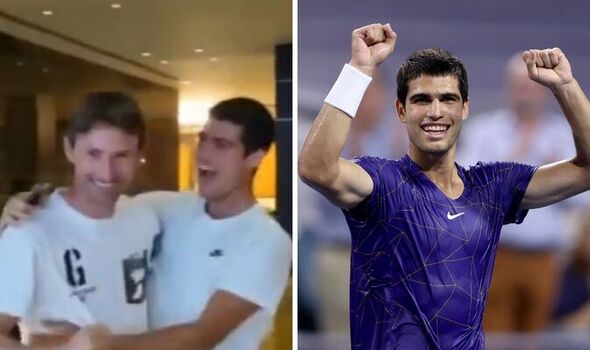 Carlos Alcaraz’s coach surprised the 18-year-old in emotional scenes ahead of his Miami Open final. The Spaniard became the second-youngest ATP finalist in the tournament’s history behind Rafael Nadal back in 2005. Juan Carlos Ferrero did not join his charge in Miami after his father died but arrived at the tournament on Sunday hours before the final.

Alcaraz is the second-youngest man to ever reach the Miami Open final after Nadal, who was around a month younger than the world No 16 when he achieved the feat back in 2005. And he is gunning to become the youngest champion by defeating fellow first-time Masters finalist Casper Ruud in Sunday’s championship match.

The 18-year-old has impressed this week, defeating the likes of defending champion Hubert Hurkacz and third seed Stefanos Tsitsipas to make the final. And his run has been all the more impressive in the absence of his coach, former world No 1 Juan Carlos Ferrero, who was unable to travel to Miami after his father Eduardo suddenly passed away last week.

Alcaraz had already shared an emotional tribute to Ferrero and his father earlier in the week, writing “For you Juanki. This win is yours,” on the camera after his quarter-final win over Miomir Kecmanovic. Ferrero himself has now made a touching gesture towards his young protegee, surprising him by flying in hours before his maiden Masters final.

The 2003 French Open champion had wanted to surprise Alcaraz and in an emotional video, can be seen bursting into the teenager’s hotel room where Alcaraz is sat quietly with frendly and family, embracing him in a brotherly hug after arrivin in Florida for the final.

The pair had still been in close contact throughout the week but Ferrero had not joined the team in Miami though made sure he wouldn’t miss the world No 16’s first-ever Masters final. Together, Ferrero and Alcaraz had set their sights on the 18-year-old breaking the world’s top 15 by the end of the year as their main goal for the season but they have already achieved it as a result of his Miami run and Alcaraz will crack the top 15 when the rankings update on Monday.

Ferrero recently spoke to El Partidazom about the young player and admitted he could see him winning a Grand Slam title as early as this year. “He has the level to do so,” the 42-year-old said. “First you have to see yourself in that pressure situation and know how to learn from it.”

And Alcaraz’s coach went as far as to claim that the young Spaniard had “lost respect” for his predecessor Nadal “in a good way” after losing a close, three-hour encounter in their recent Indian Wells semi-final. “He has lost respect for him in a good way. He is capable of playing one to one and feels capable of beating him,” he added.