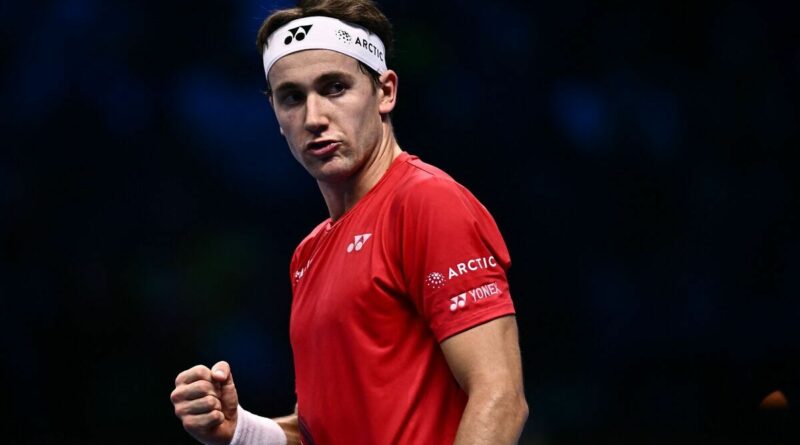 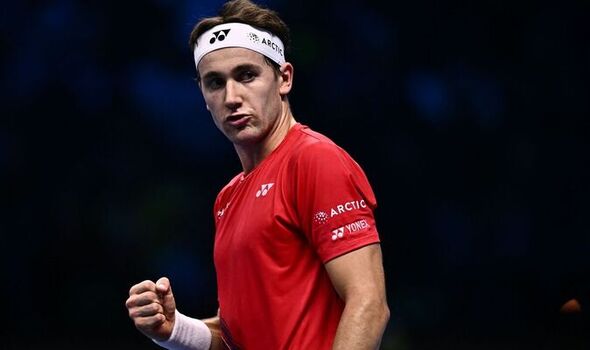 Casper Ruud broke new ground at the ATP Finals as he reached the final for the first time with a dominant 6-2 6-4 win over Andrey Rublev. The world No 3 looked to be cruising to victory before he was broken when serving for the match but he recovered to dispatch the Russian. Ruud will now face Novak Djokovic as he bids to win his biggest title yet to cap off what has been a career-best season.

Ruud and Rublev were both bidding to break new ground at the ATP Finals as both men sought a maiden final at the year-end championships. The third seed was playing his second-successive semi-final while the Russian had made it out of the group stage for the first time in three attempts.

And it was last year’s semi-finalist who started strong as he got the first break of the match to lead 3-2 after surviving a scare on his own serve in the previous game, having gone from 40-0 to deuce before holding on. It was suddenly all one-way traffic for the Norwegian, who held to love before breaking the Rublev serve for a second time as the 25-year-old imploded during the changeover, ranting and hitting his own thigh.

Ruud wasted no time as he served out a 6-2 set to love in just 32 minutes, sealing it with his third ace of the match. The Norwegian refused to let up as he managed to earn a moral bagel, winning his sixth consecutive game as he went up an immediate double-break up in the second set to lead 3-0.

Rublev was left looking defeated as he retreated to his bench for the changeover and put his head in his hands, appearing to cry. The Russian finally managed to break Ruud’s streak of games after seven in a row, earning a huge cheer from the Pala Alpitour crowd as he held to trail 1-4 in the second set.

The sixth seed managed to get one more love-hold before Ruud stepped up to serve for the match. But for the first time in the match, the world No 4 found himself facing a break point as Rublev had nothing to lose, and the Russian earned his first break with a winner as the Turin crowd began chanting his name. It was six straight points for Rublev as he held to love before the 23-year-old had the chance to serve for the match again.

This time he was able to serve out a 6-2 6-4 win to love, sending Rublev packing in just an hour and eight minutes with the Russian’s 17 errors costing him as Ruud hit just nine. The nine-time title winner will his maiden final in Turin after finding himself eliminated at the semi-final stage last year on his debut. It means the 23-year-old has reached finals at three of the five biggest events on the tennis calendar this season, having been the runner-up at the French Open and US Open.

The world No 4 will now face Djokovic for the biggest title of his career in tomorrow’s final. Ruud has nine titles to his name but all have come at the lowest level on the tour, ATP 250. Meanwhile the Serb is bidding to equal Roger Federer’s record of six ATP Finals titles.

Djokovic won his first season-ending championships back in 2008 before winning four in a row from 2012 to 2015 but he has not won one since, appearing in two finals and losing to Andy Murray in 2016 and Alexander Zverev in 2018. The Serb leads his head-to-head with Ruud 3-0 and the 23-year-old has never even taken a set off the world No 8.

Meanwhile, Rublev’s season comes to an end as he has been left unable to compete in the upcoming Davis Cup Finals after Russia was banned from competing in response to the war in Ukraine. Despite losing his final match of the year, the 25-year-old also ends the season having reached the semi-finals of the ATP Finals for the first time while he also picked up four titles in 2022 and reached two more Grand Slam quarter-finals. 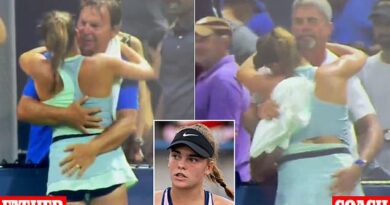