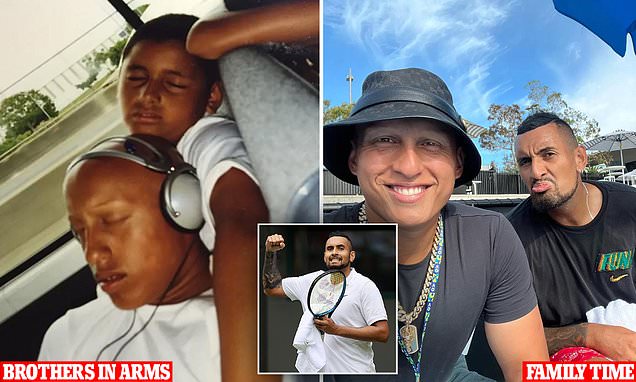 Aussie superstar Nick Kyrgios is into the Wimbledon final on Sunday night, but brother Christos has broken down in tears as he opened up about the harrowing journey to reach tennis’ pinnacle that had his family ‘worried sick’.

Christos revealed the brothers were recently estranged after an incident in which he admits he ‘overstepped the mark’ when trying to offer guidance during a period where Nick was ‘trying to drink his way out of his depression’.

Ahead of Kyrgios’ highly-anticipated match against Novak Djokovic to decide who the king of grass is, Christos penned a column that gave an insight into the rollercoaster ride that comes with supporting Nick. 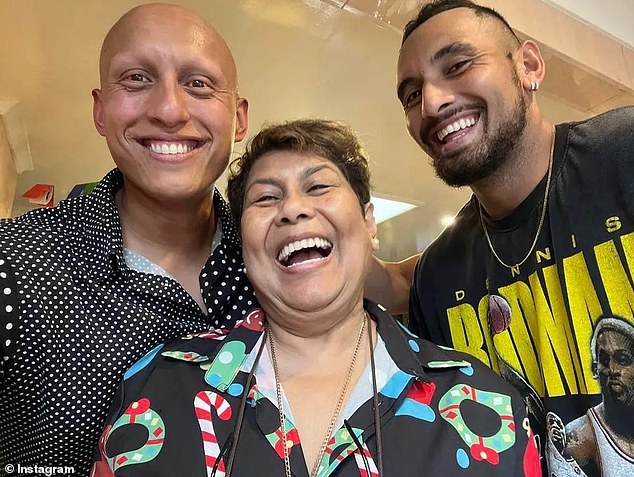 Christos Kyrgios (left) with brother Nick and their mother Norlaila 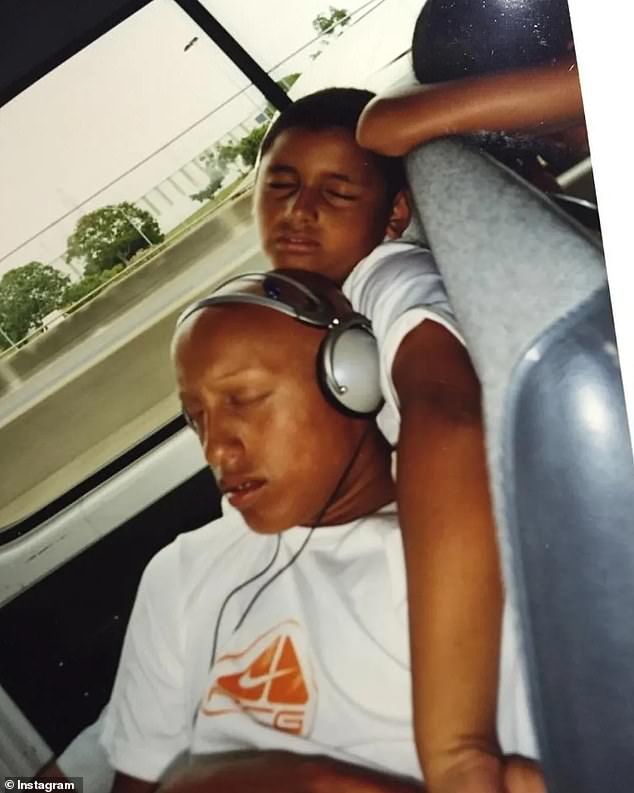 ‘People wouldn’t know this but Nick and I stopped talking for quite a while. He was so unhappy in himself that he shut out the people that had his best interests at heart,’ he wrote for Fairfax.

‘I’m far from perfect, but as a big brother it killed me seeing him go through the pain he was suffering. Mum was worried sick about him. We all were.

‘He was caught between trying to be someone everyone said he was and being the person he wanted to be,’ wrote Christos. 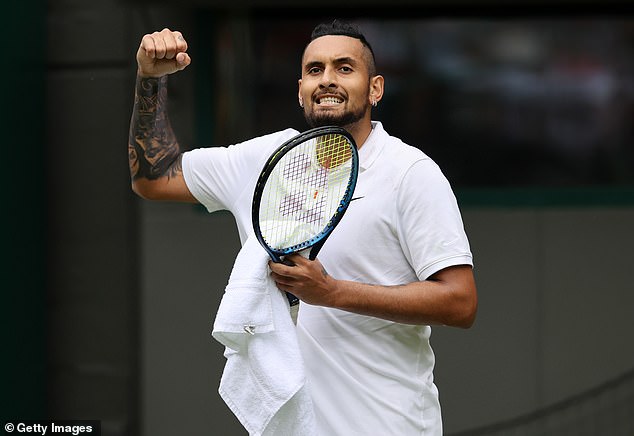 Nick Kyrgios celebrates during his first round win over Ugo Humbert

Kyrgios has made headlines for his acts both on and off the court during Wimbledon, with third round opponent Stefanos Tsitsipas labelling him an ‘evil’ ‘bully’, while fellow Aussie great Pat Cash even called him a ‘cheat’.

What no one can argue with, however, is the fact he has served the most aces in the tournament, recorded the second-fastest serve and is through to a Grand Slam final. 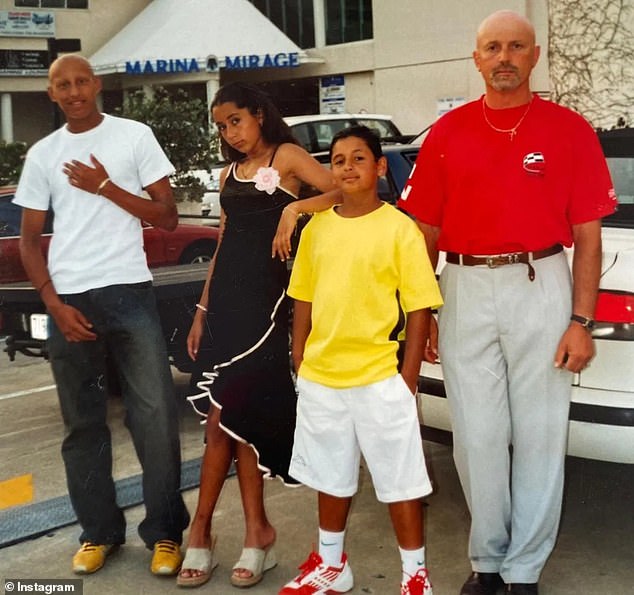 The Kyrgios kids from left to right: Christos, Halimah and Nick with their father Giorgos

Christos said the journey to reach a Grand Slam final was far from easy, with Nick dealing with mental health demons.

‘The world changed him. Tennis changed him … he was a prisoner in his own body, going through the motions without any sense of happiness in the life he’d worked so hard to make for himself,’ he wrote.

‘I’d come over to visit Mum and Dad’s and Nick wouldn’t get out of bed before midday.’ 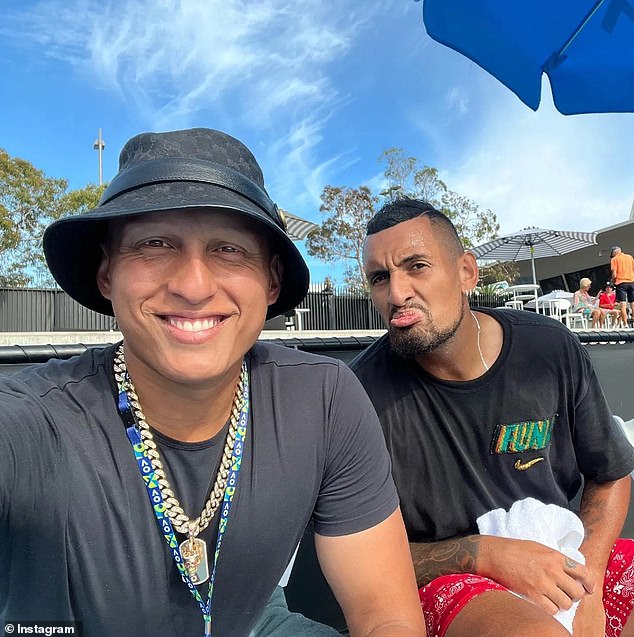 When Christos, who admits he is even more ‘fiery’ than his brother, confronted Nick, it led to the pair being estranged for a period.

Now, with the help of fiance Costeen Hatzi, Chrisos said he is proud of the ‘transformation’ his brother has gone through.

Kyrgios opened up recently about the depths he sunk to in the period Christos was referring to. 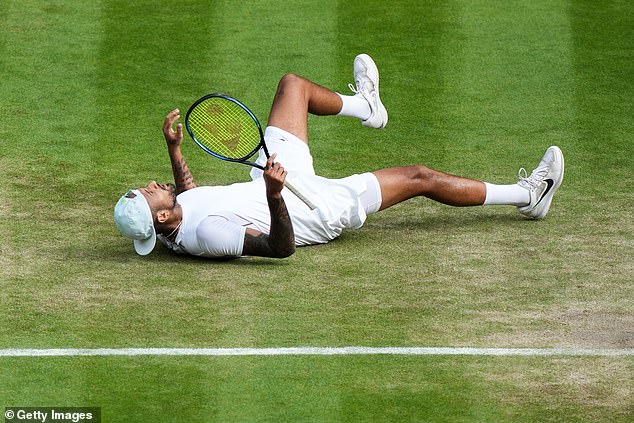 ‘It was very serious, to the point of self-harm and it’s not okay,’ he told WWOS.

‘I guess I pushed everyone that cared about me away and I wasn’t communicating, and I just shut down real life and I was trying to handle and tackle my problems head-on.

‘I was abusing alcohol a lot, drugs and that spiralled out of control. Now I barely drink – I literally have a glass of wine at dinner.

‘That was the initial kind of thing I had to clean up a little bit and then build my relationship back with my family and get into healthier habits like the basics; like diet, getting good sleep, trying to train a little bit more and that was it,’ said Kyrgios. 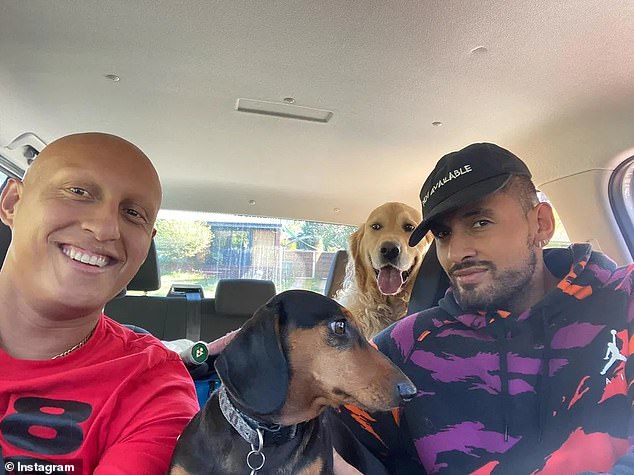 Christos took to Instagram on Sunday morning and posted an inspirational quote to his 30,000 followers along with a shot of him, Nick and two adorable dogs.

‘Your ability to focus gives you the power to do anything you want with your life. Don’t allow distractions and negativity to get in your way. As soon as you focus on the right questions, you’ll start getting all the right answers,’ he wrote on Instagram. 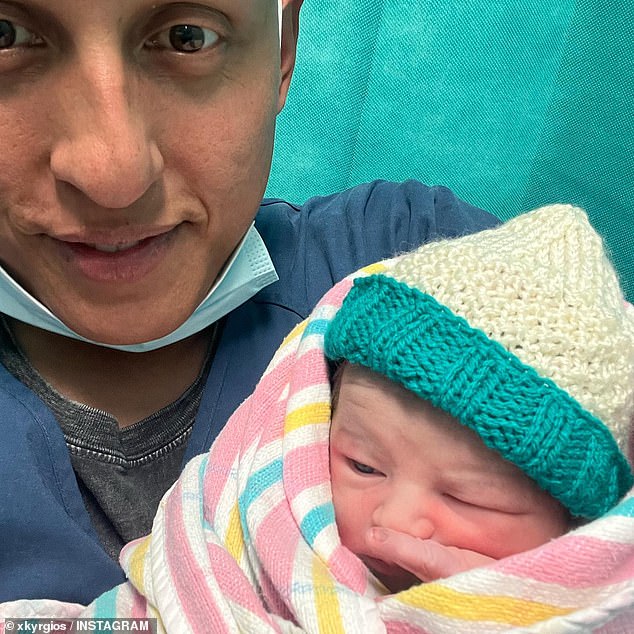 Christos Kyrgios with son George Onyx Kyrgios, who was born in June 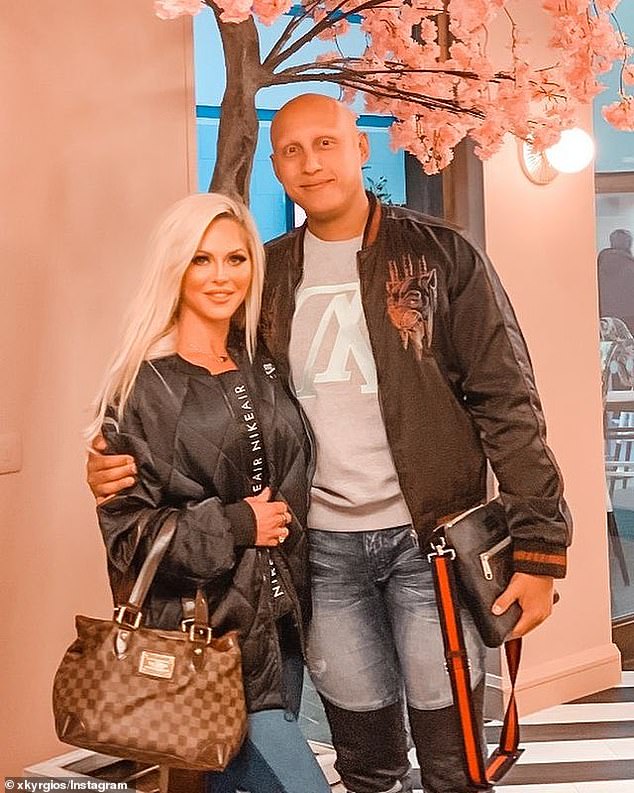 In an Instagram post, the couple described their son as being ‘better than perfect’ alongside candid photos of the birth.

He said he can’t wait for Nick to come home and meet his nephew for the first time, and said his brother will already ‘be a champion’ in George’s eyes.

He also revealed he sent his brother a message of support after Rafael Nadal pulled out of the semi-final, sending Kyrgios to the final.

And what did Nick reply?

Kyrgios was born in Canberra on April 27, 1995, as the third child to Greek father Giorgios, a self-employed house painter that moved to Australia as a teenager, and Malaysian mother Norlaila, affectionately known as Nill.

Giorgios, who goes by George, is an ever-present in his son’s box throughout the tennis season but his mother, due to a cocktail of anxiety and ill-health has stayed away from Kyrgios’ matches for years now. 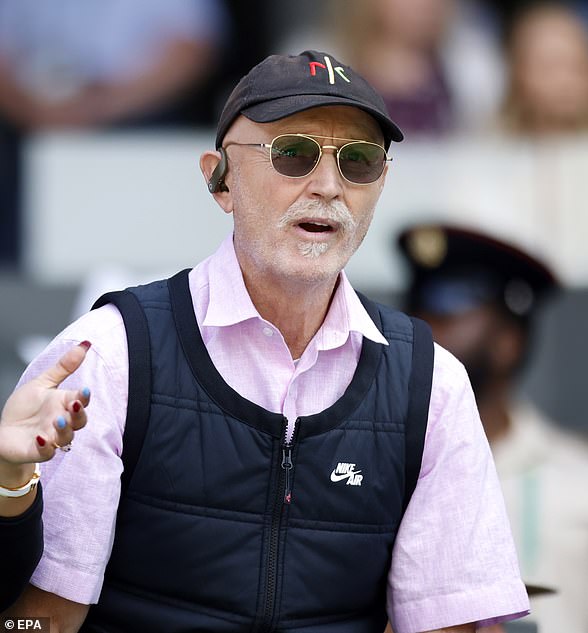 Giorgos Kyrgios watching Nick during his fourth-round match at Wimbledon

His mother was born into the Selangor royal family in Malaysia, a qualifying royal through the cousin of her grandfather – the Sultan of Pahang.

That made Norlaila the Tengku of Pahang, which is closely translated to make her the princess of the Pahang state.

It was not until moving to Australia in her twenties, where she went on to become a computer engineer before raising three children, did she drop her royal title.

The couple settled and married in 1988, going on to have son Christos, daughter Halilah and lastly, tennis supremo Nick. 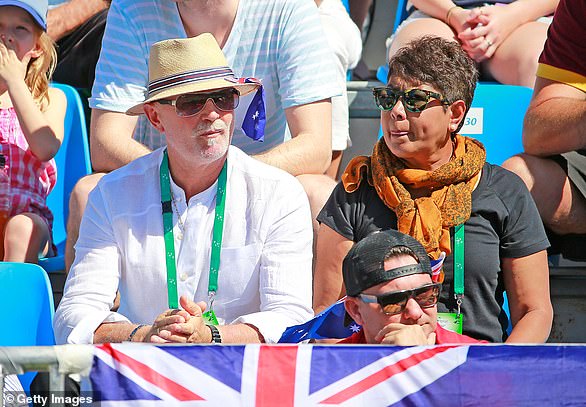 Family is central to who Kyrgios is as a person – even when he is seen barking at them for not celebrating or supporting him as he wants them to.

Take September 2021 when Kyrgios chose to pull out of every tournament remaining in that year to spend time at home with his mother.

She was ill, facing severe problems with her kidneys, and having been left scarred by the death of his grandmother, Julianah Foster, in 2014. Kyrgios, to some controversially so, has tennis far down his list of priorities.

Kyrgios has always had a particularly close relationship with his siblings Christos and Halimah. 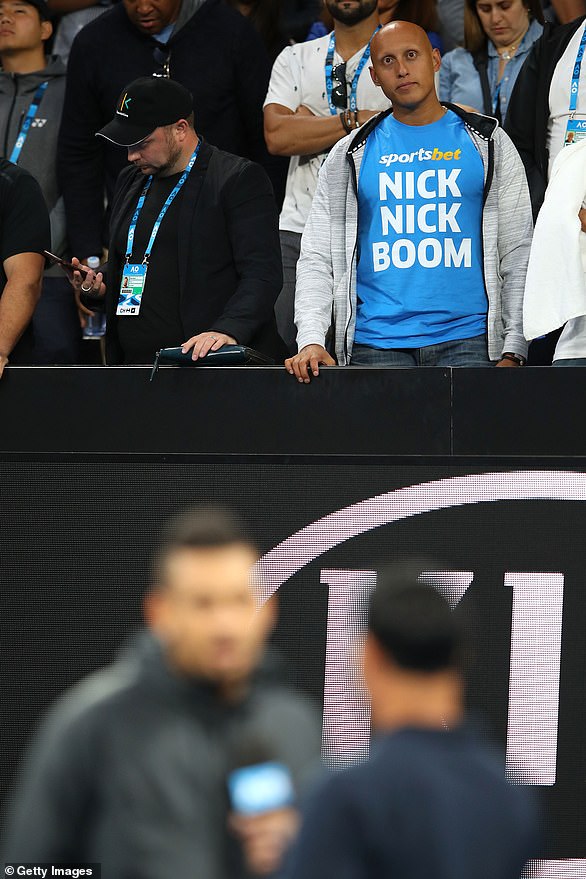 Christos is a sports coach that has also been tasked with being the part-time CEO of NK Foundation, the tennis star’s foundational arm.

His sister Halimah, 33, rose to prominence on The Voice Australia and it was Halimah who reflected on a side of Kyrgios that, until he went public with his struggles with self-harm and suicidal thoughts, many rarely get to see. 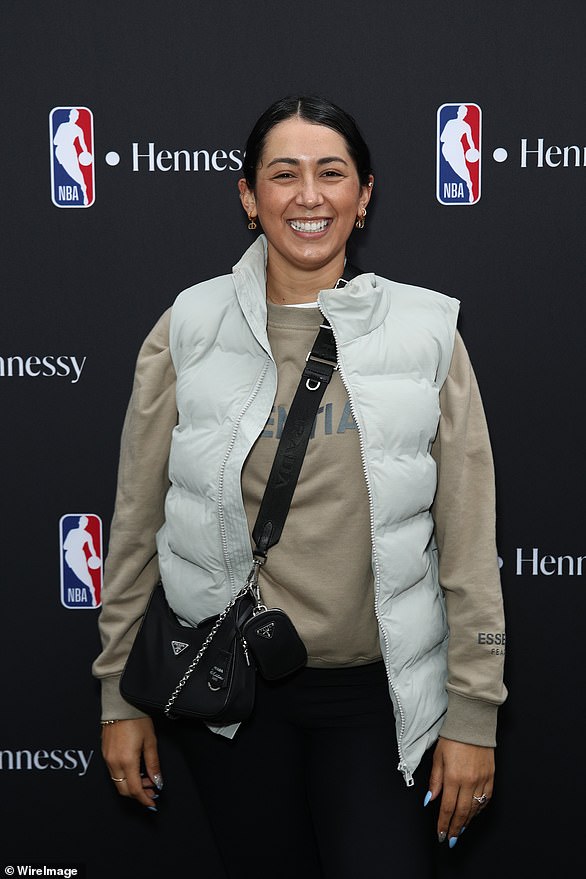 Halimah Kyrgios at a social event earlier this year

The Aussie, who was out of shape as a child in his early years studying at Radford College, saw his his picture temporarily removed from the school’s Hall of Fame due to his on-court antics back in 2015. Even his own high school briefly put some distance to their greatest sporting talent.

Kyrgios was said to be popular at school, a teller of jokes and a fun-spirited personality.

It was basketball that stole his heart first, not tennis, and were it not for the intervention of dad Giorgos and mum Norlaila, he may never have found his path to Grand Slam supremacy at Wimbledon. 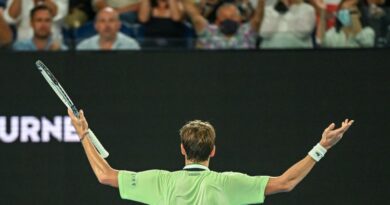 Medvedev loses the Australian Open, but wins a title 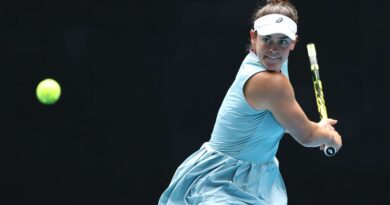