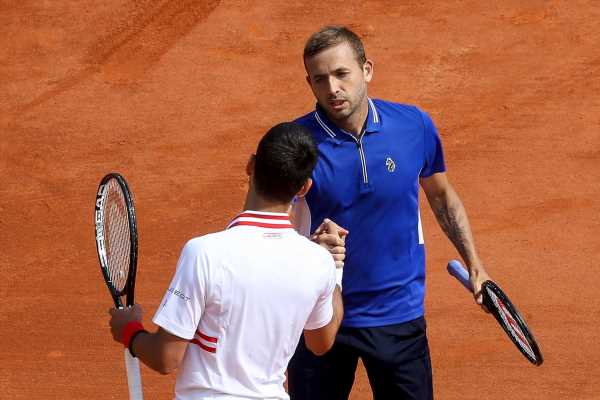 Evans secured the shock win in just over two hours

Dan Evans produced the best victory of his career to stun Novak Djokovic in the third round of the Monte-Carlo Masters.

The British number one, whose first-round win was his first on clay at tour level for four years, had never beaten a top-six player but he put on a brilliant performance against a below-par Djokovic to win 6-4 7-5.

Evans is through to the quarter-finals of a Masters event for the first time and will next play David Goffin.

“You’ve got to believe you can win,” Evans said afterwards. “Of course I doubted myself in the match. Serving it out is not easy, you’ve got all sorts running through your head.

“I’m just happy with how it went and it’s one to savour for after the tournament, telling the kids and grandkids that you beat the world number one, it’s a nice one.”

Evans raced into a 3-0 lead in the match, breaking Djokovic in his opening two service games, before the Serb levelled at 4-4.

The Brit then broke Djokovic again to lead 5-4, and converted his third set point in the following game to take the first set.

In the second set, it was Djokovic’s turn to rack up a 3-0 advantage early on, but Evans came back to level at 3-3. The match then followed serve until the penultimate game, when Evans broke Djokovic for the fifth time in the match to move to 6-5.

After going 15-0 down, Evans won the next four points to seal the win, in what was his first career meeting with the 18-time Grand Slam champion.

“It was just an awful performance,” said Djokovic, who was unbeaten in 2021 going into the match. “I can’t take any positives away from this match. It definitely leaves a bitter feeling exiting the court this way.”

He added: “He [Evans] is a nice player to watch, not so nice to play against.

“Clay wasn’t his surface growing up but the way he plays on clay, I think he plays in a similar quality level to what he plays on his best surfaces. He’s a very good player, no doubt about it.”