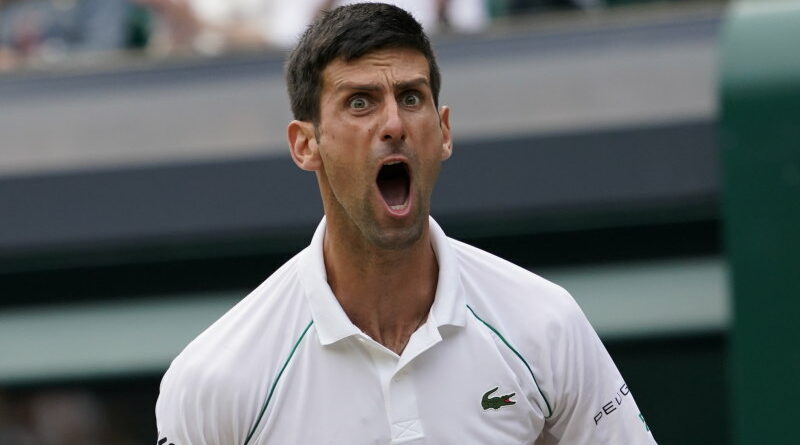 London: Defending champion Novak Djokovic absorbed a barrage of powerful hitting from Canadian Denis Shapovalov to reach his seventh Wimbledon final on Friday with a 7-6(3), 7-5, 7-5 victory that kept the indefatigable Serb on course to write history.

The 34-year-old was eclipsed at times by his 22-year-old opponent on an overcast centre court but as he almost always does, converted his chances in clinical fashion to set up a Sunday showdown with Italian Matteo Berrettini. 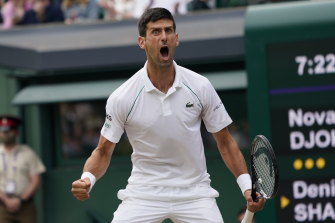 Meantime, seventh seed Matteo Berrettini stayed solid in the face of a spirited fightback from Poland’s Hubert Hurkacz to become the first Italian to reach the Wimbledon final on Friday with a 6-3, 6-0, 6-7(3), 6-4 victory.

The 25-year-old took two hours and 36 minutes to get past the 14th seeded Hurkacz on centre court to reach the championship match on Sunday – the same day Italy play in the Euro 2020 soccer final a few kilometres up the road at Wembley Stadium against England.

“I have no words,” Berrettini said in his on-court interview. “I need, I think, couple of hours to understand what happened. I just know that I played a great match. I’m really happy. I’m really glad to be here.

“I think I never dreamed about this because it was too much for a dream.” 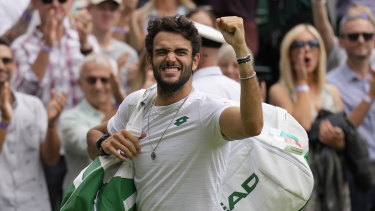 Italy’s Matteo Berrettini is into his first Wimbledon final.Credit:AP

Berrettini’s success in the past fortnight has not been entirely out of the blue as he arrived at the All England Club after winning his fifth tour-level title at Queen’s.

He was the first player to win the Wimbledon warm-up event on his debut appearance since Boris Becker in 1985 and remains on course to match the German’s feat of completing the Queen’s Club-Wimbledon double in the same year.

It was billed as a tight contest between the first-time Wimbledon semi-finalists, who were evenly matched in their ability to serve big and came into the match with a 1-1 head-to-head record.

While Berrettini defeated Hurkacz in straight sets in the Australian Open qualifying draw in 2018, the Pole had returned the favour when they met the following year in Miami.

And following Hurkacz’s morale-boosting quarter-final win over eight-time Wimbledon champion Roger Federer in straight sets, including a bagel in the third, few would have doubted his credentials against Berrettini.

But it was the Italian who got off to a crisp start and then dominated the contest, blasting 60 winners, including 22 aces.

Every match of the Wimbledon finals is available to stream live and ad-free on Stan Sport with select games on 9GEM.