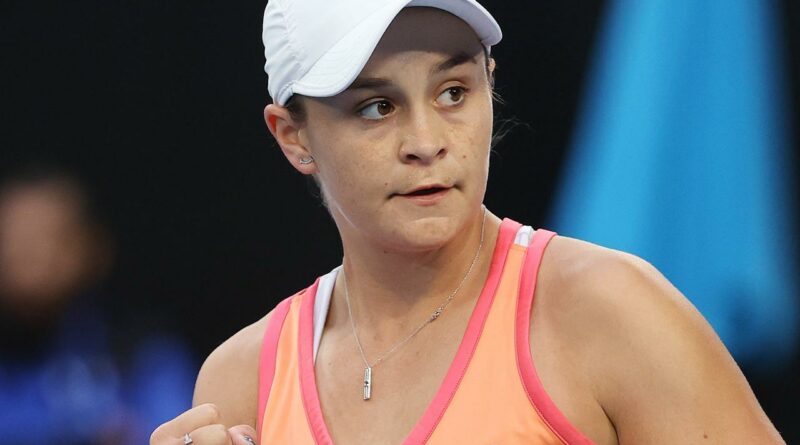 Ash Barty has tasted consecutive defeats for the first time in 13 months after a shock elimination at the Adelaide International.

The World No. 1 was blasted off court by a red-hot Danielle Collins in just over one hour on Wednesday night at Memorial Drive.

The defending champion was sent packing in the second round — after receiving a bye in the first round — leaving the 24-year-old suddenly needing to pull her 2021 season out of a tailspin.

Far worse than the consecutive defeats is the manner of the 6-3 6-4 loss on Wednesday where Barty twice lost her way after leading with a break in both sets.

It leaves her No. 1 ranking under siege with Aussie Open champion Naomi Osaka breathing down her neck.

Barty was ahead 3-1 in the first set before Collins ran away with five straight service games.

It was a similar story in the second set where the American came from a break down to beat Barty for the first time.

Barty was ahead 4-2 before Collins closed it out by winning the final four service games.

Barty also lost her way during her quarter-final exit at the Australian Open after taking the first set against Karolina Muchova.

After such a promising start to her Aussie summer where she won the Yarra Valley Classic in Melbourne as part of a nine-match winning streak, Barty has suddenly gone cold.

Barty was full of confidence in her ability to recover from the defeat in Melbourne, accepting

a wildcard into this year’s Adelaide event at the last minute.

It is the last time Barty will play in Australia before she heads overseas into the uncertainty of a 2021 WTA Tour that will be played in the middle of the COVID-19 pandemic.

She will first travel to the Middle East before making the journey to Miami shere she is defending 1000 rankings points as the defending champion.

There was drama in the match earlier, with Collins accusing the chair umpire of giving Barty preferential treatment because she is the home-country hero at Memorial Drive.

Collins was refused a Hawk Eye review by the chair before Collins angrily accused the official of bias because “she’s an Australian”.

“I am sorry but this is unacceptable,” she bristled towards umpire Tom Sweeney.

Replays showed Collins was right to be angry with the ball judged to have landed out by millimetres.

Collins will face either Aussie Maddison Inglis or Iga Swiatek in the quarter-finals.

'Am I next?': Coco Gauff posts powerful video after George Floyd killing