Emma Raducanu has added to her frenzied schedule by entering the Mubadala World Tennis Championship (MWTC) in Abu Dhabi in December. The US Open champion is the first star name to be confirmed for the event, taking place at the International Tennis Centre at Zayed Sports City from December 16-18.

It had already promised to be a hectic end to the season for the 18-year-old, who made history at Flushing Meadows by becoming the first qualifier to ever win a Grand Slam event.

She had already committed to a gruelling 15,000-mile trek to four different countries before Christmas, including the BNP Paribas Open at Indian Wells, where she lost her first match since her triumph in New York, going down 6-2 6-4 to Belarussian player Aliaksandra Sasnovich.

Her next tournament will be the Kremlin Cup in Moscow, Russia, which starts on October 18, before a trip to Romania to play in the Transylvania Open.

Following that, she is entered for the Upper Austria Ladies event in Linz, barring the now unlikely scenario of her securing enough ranking points to play at the WTA Finals in Mexico.

And now the British No 1, and new world No 22, will make her MWTC debut in a bid to emulate previous winners Maria Sharapova, Serena Williams, and Jelena Ostapenko.

“I’ve never been to Abu Dhabi and can’t wait to go and play in the championship,” she told The National.

“I know the UAE is celebrating its 50th anniversary at the beginning of December, so I’m sure it’s going to be amazing there and I’m excited to experience everything the country has to offer both at the event and culturally.”

The event was cancelled in 2020 due to Covid-19, but John Lickrish, CEO of tournament organisers Flash Entertainment, said the appearance of Raducanu would help reward supporters for their loyalty.

“We have consistently set the bar high year-on-year with our line-up, to the point where fans expect the best. The return of the Championship with fans was a milestone moment and we wanted to reward their loyalty with another unrivalled experience.”

He added: “Seeing Emma’s star rising with superb performances in the summer, and the fans’ reaction, we knew we had to bring her to Abu Dhabi, with Emma’s remarkable victory at the US Open reinforcing that decision.

“Emma – and her opponent – who will be announced in coming days, will continue the legacy of the MWTC women’s match, which has a history of attracting the biggest names in some epic encounters.

“This year’s full line-up, to be announced in the weeks ahead, underlines Abu Dhabi’s capability to host world-class international events featuring global talent, in a safe and secure environment.”

Raducanu shot to the superstardom after her success in New York, becoming the first British woman to capture a Grand Slam since Virginia Wade won Wimbledon in 1977.

She has since split from coach Andrew Richardson, and despite defeat on her return to action in Indian Wells, refused to be downbeat as she adjusts to heightened expectations.

“I’m still very, very new to the tour. I think that experience just comes from playing week in, week out and experiencing all these different things.” 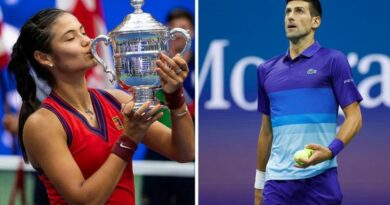 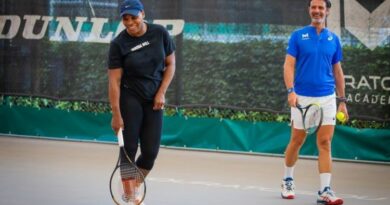