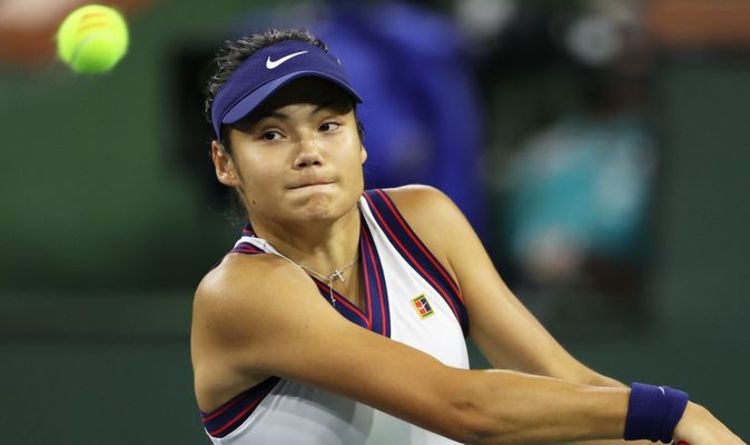 Emma Raducanu survived a mid-match horror show to win her first match as the US Open champion in the land of Dracula tonight. The British No.1 lost five consecutive games and the first set to black-clad Polona Hercog at the Transylvania Open in Romania.

But the Bromley teenager refused to be counted out and she stormed back to triumph 4-6 7-5 6-1 against the world No.124.

Raducanu made history by becoming the first qualifier to ever win a Major title when she won 10 matches without dropping a set.

But incredibly, this was also her first ever win in a regular WTA Tour event at her fourth attempt – and the first time she had won a set outside a Grand Slam.

Raducanu is also playing without a coach since splitting with Andrew Richardson after New York.

She will face Romanian world No.106 Ana Bogdan in the next round – with top seed Simona Halep here scheduled semi-final opponent on Saturday.

Raducanu was delighted to play her first event in her father Ian’s Romanian homeland but strict Covid rules saw fans banned. Only a straggle of volunteers and off-duty ball boys and girls greeted her as she walked out in a face mask and white kit on Centre Court.

Hercog has 15 tattoos and three WTA titles but Raducanu, who is six inches shorter, seemed to have her measure in the early games.

The world No.23 finally took a sixth break point in the second game to lead 2-0 and was 4-1 up after only 24 minutes. But the wily Hercog, 30, was able to take the pace off the ball.

By chipping her backhand and looping her forehand to disrupt Raducanu’s rhythm. And the match turned as she took the next five games – and both her break points – to win the opening set in 46 minutes when the No.3 seed sent a backhand long.

The 18-year-old appealed for patience before returning to action – and she needed it herself during this match. She also managed to keep her cool after a couple of questionable line calls with no HawkEye being used.

Raducanu failed to take three break points at 1-2 in the second set and then saved two break points on her own service, the second at 5-5 with an evil short backhand slice.

It was to prove a decisive moment. The US Open champion then took her third set point in the next game when Hercog sent a forehand long.

The Slovene then took a toilet break but could not stop the momentum of the match as Raducanu romped to a psychologically huge win in two hours and 27 minutes.

Hercog saved two match points at 0-5 and stopped a losing streak of seven games and the Brit saved a break point in the next game with a sublime inside out forehandwinner.

And she took her third match point with an ace.