Emma Raducanu’s next tournament has been confirmed after the Brit crashed out of the Australian Open in the second round. The world No 18 recently started what is her first full year on the professional tour, winning just one match across two events Down Under as she struggled with blistering. She will now play next month’s Abierto Akron Zapopan.

Raducanu stunned the sporting world by winning the US Open as a qualifier back in September – the first in history to do so – and the historic triumph saw her ranking rise from world No 150 straight into the top 25.

Now sitting at a career-high of world No 18, and projected to climb higher at the conclusion of the Australian Open, she is free to enter even the most prestigious events on the WTA Tour.

With the US Open marking just her fourth-ever professional tournament, the Bromley local will be experiencing plenty of firsts in 2022 by making her debut at almost every tournament she plays.

And she has already added another event to her schedule in her first year on the tour, entering the WTA 250 event in Guadalajara which begins on February 21, where she will be the top seed.

The Abierto Akron Zapopan runs from February 21, with the popular Abierto GNP Seguros event in Monterrey running the week after, which Raducanu could still enter.

She will be hoping to fare better in Mexico than she did in Australia, where she was overpowered in Sydney before being hampered by blisters in Melbourne.

The 19-year-old started her season with a heavy loss to Elena Rybakina, losing just one game in a 55 minute 6-0 6-1 defeat at the Sydney Tennis Classic.

She faced a tough opening round at the Australian Open, making her debut as the 17th seed and drawing fellow US Open champion Sloane Stephens.

Raducanu produced an impressive display to dispatch the former world No 3 6-0 2-6 6-1 in an up-and-down match, but had her tournament cut short by blistering in the following round.

The world No 18 was barely able to hold her racket, serve or hit forehands during her loss to Danka Kovinic, but kept herself in the match and even won a set by slicing her forehand and focusing on the backhand.

After the world No 98 defeated her 6-4 4-6 6-3, Raducanu admitted some members of her team didn’t want her to play the match at all, before unveiling her upcoming plans.

“I know that after this I’ve got a few weeks where I want to try and do as much of catchup as possible in terms of like fitness and my pre-season because I missed it actually in December. So try and do a bit of work there,” she said, alluding to the pre-season preparations she missed after testing positive for Covid.

She also hinted at her next appearances in the lead up to the Indian Wells WTA 1000 tournament, often branded the ‘fifth Grand Slam’, which begins in March, adding: “There is not much time, but, I mean, there is some tournaments in Mexico or the Middle East, and it’s just a matter of that before Indian Wells.”

And it seems Mexico is the place of choice for the US Open champion, who will be the top seed in Guadalajara next month.

She could then move onto the WTA 250 the following week in Monterrey, where fellow Brit Heather Watson is a former champion. 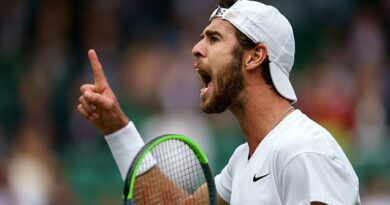