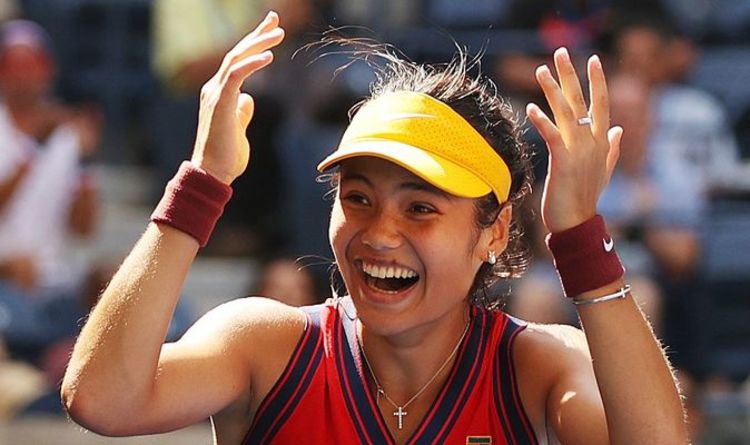 Raducanu picked up her first win since her heroic US Open title triumph in New York last month, after fighting back from a set down to defeat the Slovakian 4-6 7-5 6-1.

Despite clinching victory, arguably the loudest cheer for the 18-year-old came after her match had finished, as she impressed the local officials and journalists in the arena by speaking Romanian.

Raducanu was courtside giving her thoughts on the win over Hercog and insisted she spoke a little of the local language during her post-match interview.

As a result she delighted the local journalists by commenting: “Mă simt ca acasă aici!” which translates to ‘‘I feel like home here!’, and that resulted in a huge cheer from those in attendance at the opening round clash.

The comments from the 18-year-old come as no surprise, as she holds deep roots to the Eastern European nation with it being the native birthplace and home of father Ian.

Unfortunately for the youngster, fans were not in attendance for her clash with Hercog due to the COVID-19 restrictions in place, however fans were out in the droves to get a glimpse of the US Open champion at a practice session on Sunday.

As a result Raducanu also wowed her adoring Romanian fans at the training session that was open to supporters, as she once again showed off her skills with the native language.

The 18-year-old headed to the tournament coach-less after she shocked the tennis world by parting with her former trainer Andrew Richardson, following her record-breaking US Open win.

She was, however, joined by her father for the trip as he heads back to his native land, and the teen sensation also revealed ahead of the event that she would be meeting up with her Grandmother whilst in Eastern Europe.

Speaking about her Romanian connection pre tournament, Raducanu said: “I love Romania. I used to come once or twice a year to visit my grandmother, who lives in Bucharest, while growing up. It is an hour’s flight from here.

“When the tournament is done, I’d love to pop over to Bucharest to be able to visit her. I haven’t seen her for two-and-a-half years.

“The welcome I got was really, really nice and I always love coming back. The people here are really friendly, great humour and good food. I have great memories from this country. It is really nice to be back.

“The thing is I can understand like 80 percent of Romanian. I don’t want to big myself up.”