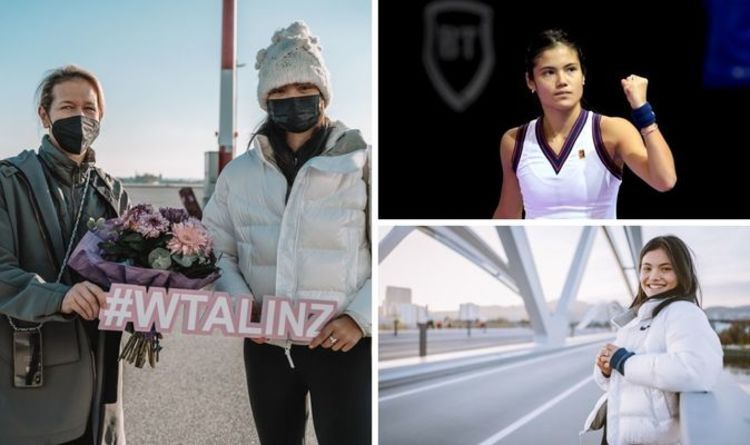 Emma Raducanu has played down her top-seed status at the season-ending Linz tournament – her first WTA Tour event as the highest-ranked player – as she looks to end her breakout campaign on a high. The 18-year-old will take on Wang Xinyu at the Upper Austria Ladies Linz on Tuesday.

The US Open champion broke into the world’s top 20 on Monday and is the highest-ranked player at the Austrian tournament.

Raducanu will look to add to her first two main tour victories that she picked up at the Transylvania Open when she plays her opening match against Chinese qualifier Wang on Tuesday.

“I never looked at seedings even when I was unranked, playing a seed in a tournament. It meant nothing to me so I’m sure it means nothing to the other players.

“It’s just as much motivation if not more to take out a seed. I just really want to have fun this week and try and enjoy it because it’s the last one of the season and I feel like I’m really in a positive mind space.”

Wang, ranked 106, will hope to take inspiration from Raducanu’s Flushing Meadows achievement, and she is in good form after winning three matches this week.

The 20-year-old won two matches in qualifying and a first-round clash with Kateryna Kozlova on Monday.

“I’m happy that I get the chance to play her and I will just try to enjoy it and play my tennis,” said Wang.

Raducanu’s mother Renee travelled to Austria with the 18-year-old and her Chinese heritage prompted plenty of interest in the country.

Raducanu sent a message in Mandarin to her Chinese supporters from New York, and Wang admitted there was lots of news about the Brit in China due to her link to the nation.

“After she won the US Open there was a lot of news about her because obviously her mum is from China,” Wang revealed.

China is the biggest commercial market for women’s tennis and Raducanu’s links to the country are likely to be lucrative for her financially in the future.

Wang agreed and said: “China for tennis has been always a big market. I didn’t know she can speak Chinese but that’s definitely good for her.”

Wang had a particularly successful junior career but her progress as a professional has unfortunately coincided with China’s strict coronavirus measures, with travel difficult and players facing mandatory quarantine periods when they return home.

She has been on tour since September and has shown encouraging form under her new British coach, Iain Hughes, who formerly trained the likes of Elina Svitolina and Belinda Bencic.

Hughes was one of the possibilities considered for Raducanu’s coaching vacancy.

Roger Federer: Djokovic and Nadal have given Swiss ‘extra motivation’ at Miami Open