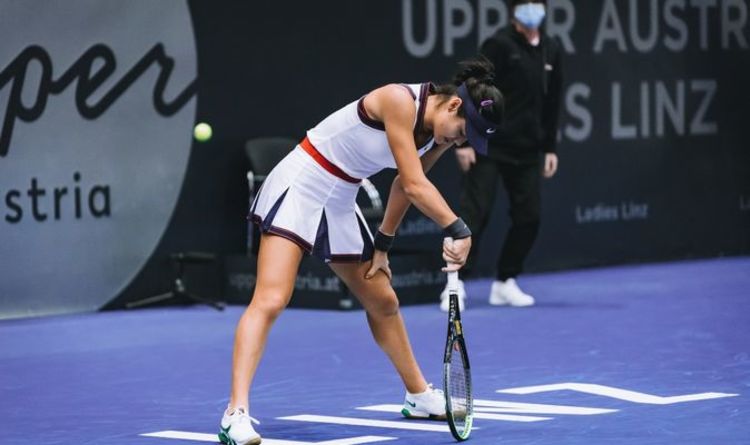 Emma Raducanu has lifted the lid on the injury she suffered in her opening round loss at the Linz Open. The Brit, who was the top seed at the tournament, lost 1-6, 7-6 (6-0), 5-7 to Wang Xinyu and received a medical timeout at the end of the penultimate game.

The teen appeared to succumb to a hip problem during the third set, which she confirmed post match.

“I thought it was a really high-level match,” noted Raducanu. “I thought Xinyu played extremely well, especially in that first set, and I’m proud of the way I fought to try to get back into the match.

“Everything was going her way and she was playing extremely well so a lot of credit to her for keeping that level out there on the court.

“In the third I had a hip spasm in the first point of that game and from there I was just fighting to try to stay in it.”

The British teenage sensation appeared confident ahead of the match, winning the coin toss and electing to serve, as she held in the opening game of the match but it was the 20-year-old who looked better on the court with three matches under her belt already.

The Bromley local bounced back immediately, breaking in the first game of the second set, but the qualifier broke straight back to level things at 1-1, running the British No 1 around the court and forcing Raducanu to fire errors of her forehand.

Raducanu managed to pull ahead again, breaking for a 3-2 lead and holding for 4-2, but the world No 106 came back once again to get back to 4-4, but Raducanu stayed with her opponent into the tie-break where she was flawless, winning it 7-0 to force a third.

The US Open roared as she got through a tough, lengthy service game to hold for 3-2 in the final set but Wang refused to back down, and was the first to strike as she broke to love at 4-4 to serve for the match, as Raducanu appeared injured, calling the trainer at the change of ends while 4-5 down in the third.

After a medical time out, the world No 20 managed to force her first crucial break point of the final set, fending off two match points to level things at 5-5, but the pair traded breaks again as Wang took the lead once more to serve out a 6-1 6-7(0) 7-5 victory over the top seed.

Despite the disappointing result, Raducanu has enjoyed a wonderful season which saw her capture the US Open title without dropping a set.

As a result, she became the new British No 1 and broke into the world’s top 20.

Prior to her triumph in New York, she reached the last 16 at Wimbledon and will be keen to lift the Venus Rosewater dish next year.

Raducanu starts the new season at the Mubadala World Championships next month and has finally announced her new coach.

Following a lengthy search, the tennis star confirmed that Torben Beltz will be her coach, who previously worked with former World No 1 and Raducanu’s idol Angelique Kerber.

“You guys cracked it. It’s obviously a great privilege to be working with such an experienced coach,” Raducanu said when asked if Beltz will be her new permanent coach.

“I’m definitely very excited to work with him throughout the pre-season and into next year so things are looking up and it’s a very, very positive feeling, very excited about all the work that is to come.”

Sharapova among stars willing to partner Murray in mixed doubles