Home » Tennis » Emma Raducanu: I can't be an innocent teenager any more 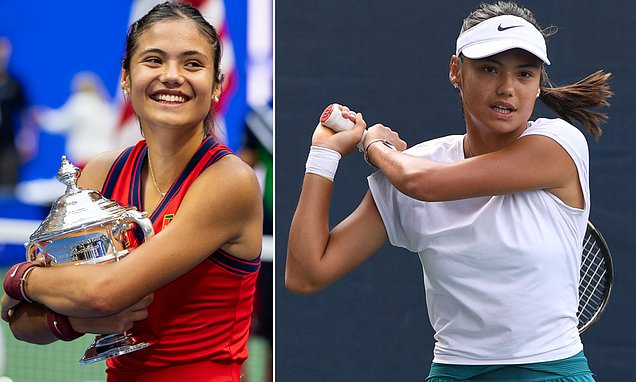 ‘I can’t be an innocent teenager any more’: A year on from her remarkable US Open triumph, Emma Raducanu aims to show she has grown and rise to the occasion again

Never again will Emma Raducanu be the innocent who turned up at Flushing Meadows last year. The one who was immediately banished to remote practice courts outside the grounds by a pitch-and-putt course, along with other qualifiers.

She acknowledges that sometimes her US Open crown, which she begins defending on Tuesday night, has weighed heavily.

‘You don’t have any time to switch off or be alone or do things you want to do. You’re constantly on guard,’ she reflected as she prepared to meet French veteran Alize Cornet. 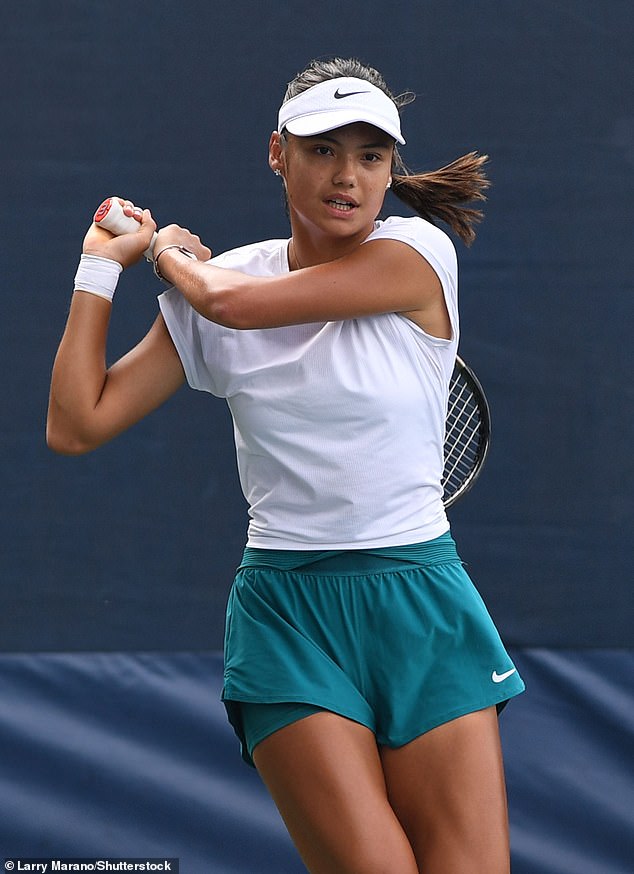 It looked that way on Friday as Raducanu practised, in somewhat frustrated fashion, under the eye of recently recruited Russian coach Dmitry Tursunov, who has been taking her through this American tour.

Last year’s band is, however, somewhat back together again for the coming week. Physio Will Herbert is in her corner as he was 12 months ago, and so is Iain Bates, head of the women’s game at the Lawn Tennis Association.

Unlike last year, when Covid meant she could not secure a visa, her mother Renee is in town although dad Ian, ever low profile, has stayed back home.

Most conspicuously absent from 2021 is coach Andrew Richardson, who helped guide her to the title via the outposts of San Jose, Landisville and South Chicago. 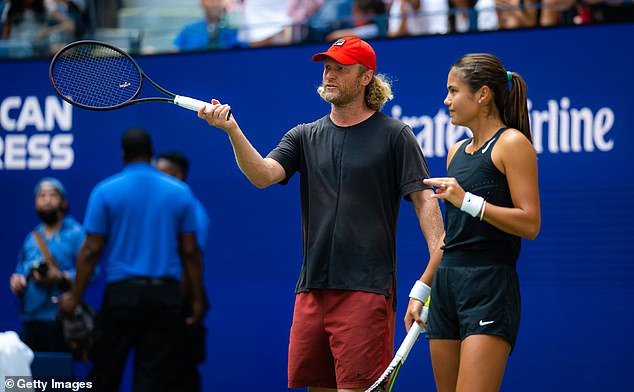 Richardson has just been appointed full-time head coach at the academy in Alicante of former Spanish star David Ferrer. His son Rocco, a promising young player, is among the pupils there and it is tending his career that the former British Davis Cup player has largely dedicated himself to this year.

He appears to have had little to no contact with Raducanu since being told their American arrangement would not be extended last September.

His departure heralded what has been a difficult 11-month period during which she has regularly shuffled the personnel around her.

Perhaps no athlete ever has had to deal with such an abrupt elevation in profile. She came to New York last summer ranked 150 and is now number 11. Were she to lose on Tuesday, she would drop back to around 80, such are the computer points she faces dropping. 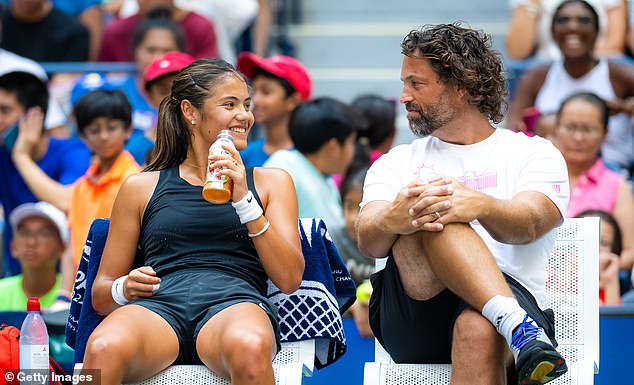 Raducanu — a remarkably mature teenager — says she is ready for the outcome, whether or not the next week sees short-term failure or another run in quick conditions that suit her game.

‘Whatever happens this week, I’m just going to be like, “OK, it’s 365 days later on the calendar tour and it’s going to be like a fresh start, you’ve taken it, you close a chapter and you start a new one”.

‘The only way is to look back at what worked, what didn’t work and take that forward.’

Not that she looks unfavourably on what has happened in a year of learning — on the job — what it is like to be among your country’s best-known citizens.

‘I’m really fortunate and have had a lot of amazing opportunities come my way, but for sure that comes with a certain trade-off. It comes with what I’ve achieved and I wouldn’t trade that for anything. 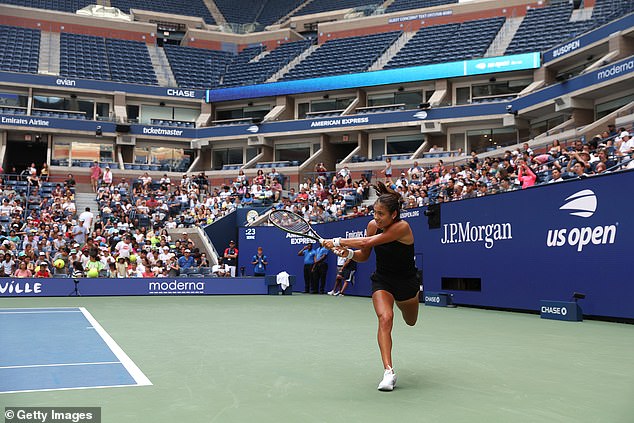 ‘I’m probably not going to be the same 18-year-old that is just swinging, no one knows who she is, and it’s OK not to be because I’m maturing as a player. It’s not the same and I’m not going to try and make it the same. There are moments in the year when I did lose that person and I got very caught up in certain things. But I’m still young at the end of the day. I’m 19, it’s just going to happen. Anyone is going through things at this sort of age, it’s all normal.’

How will Raducanu fare this week? One cause for optimism is the surviving feature that she seems to be someone who rises to the occasion (probably the opposite could be said of more mundane match-ups). She has often reserved her best for when the opponents have been the most intimidating.

She gave world number one Iga Swiatek a surprisingly close match on clay in Stuttgart; she beat former US champion Sloane Stephens at the Australian Open and last week hammered Serena Williams and Victoria Azarenka in Cincinnati.

During the lean times Raducanu has looked at New York playbacks.

‘I’ve watched that match a lot of times and other matches from the tournament,’ she said. ‘When I’m watching I see my demeanour and my facial expressions and how I am. I think that honestly in the past year the only time I’ve come close to the same sort of attitude on the court was last week. I was extremely calm, I wasn’t being very expressive but I was super-focused.’ 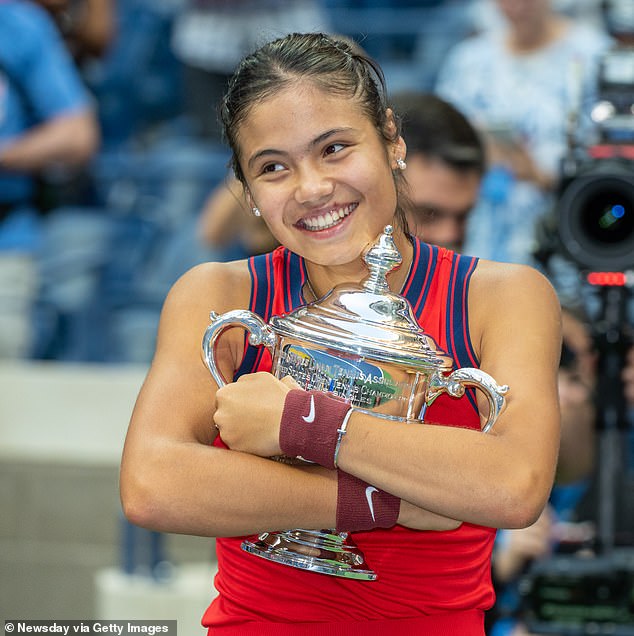 That reminded her of her mindset here last summer: ‘There’s been no sort of moaning at like what’s been happening — it was straight on to the next match, the next day of practice. I was really enjoying that and I think I’ve made a lot of progress in the last six weeks and my level in Cincinnati was starting to show that.’

The player Raducanu beat in the New York final, fellow 19-year-old Leylah Fernandez, has not had an especially smooth passage since either. There have been more high spots for her than the Brit, although Fernandez had already banked greater experience.

Amid fairly unspectacular results she won a minor WTA title in Mexico and made the last eight of the French Open. She suffered a fractured foot in Paris and only returned this month. Her ranking is now 14, and that also faces a hit.

‘It’s not like what I’ve imagined obviously. I thought everything was going to be perfect,’ she said. ‘At the same time I sort of knew there were going to be a few bumps in the road and I was just going to have to find solutions, go through those tough moments. I think it has been a great learning experience.’

If she encounters Raducanu now, certain topics are off limits: ‘It’s funny because we do run into each other at times but we don’t talk about New York. I think we both have the same mindset — that we want to think about the present and not about the past.’

Novak Djokovic says he will play at the US Open 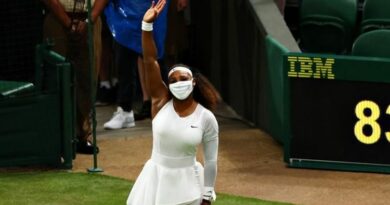