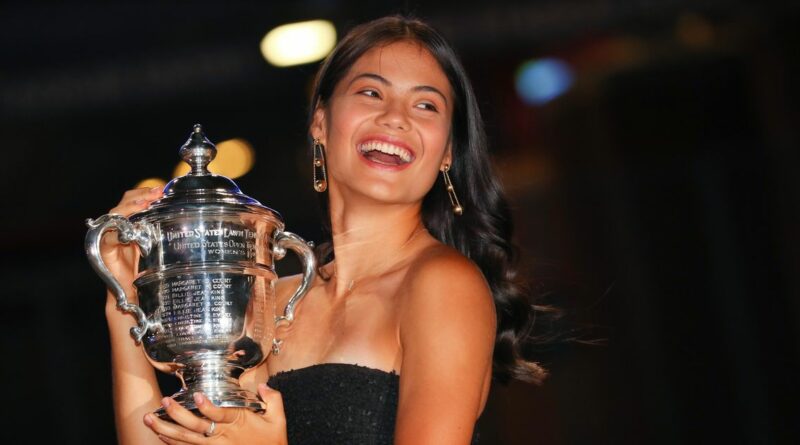 Emma Raducanu looked a million dollars under the New York night sky as she crowned her US Open victory in style.

The 18-year-old was still revelling in her momentous achievement, in becoming the first British female in 44 years to collect a Grand Slam and grabbing instant superstardom in the process.

The reality for the teenager now is this seems merely the beginning of a career which looks set to transform her into a tennis icon.

Already the sponsors are lining up in their droves to get a piece of her, following her 6-4 6-3 win over fellow teen Leylah Fernandez at the Arthur Ashe Stadium on Saturday.

Meanwhile, back home in Bromley, fans went wild in jubilation as Raducanu aced her final serve to seal her triumph, winning the tournament without dropping a single set throughout, even during qualifying.

Wearing a black dress and clutching her trophy, Raducanu posed for pictures in front of a board reading: "2021 Women's Singles Champion."

The fact she was sitting her A-levels only earlier this summer is the purest example of her meteoric rise to the top of her sport.

Along the way there was the disappointment of Wimbledon, after she was forced to withdraw mid-match due to breathing difficulties, having captured the hearts and support of the nation.

There was criticism from some quarters to follow, but Raducanu has shown a steely grit and determination to come back and win the US Open in astonishing fashion.

Along with her trophy and superstar status, she also cashed in a handsome cheque of €2.5million (£1.8m) in prize money.

Asked what the first thing she was going to spend her winnings on would be, she replied humbly that she simply wanted some new Apple Air Pod headphones.

"There’s a running joke in my team because before my first round qualifying match I lost my AirPods and I was basically running around the changing room like three minutes before my call to go on trying to find it but I lost it," she told ESPN.

"I was thinking to myself, 'You know what, if you win this match you can buy yourself a pair of AirPods' and that’s become the running joke!"

It's been a remarkable journey already for Raducanu, who was born in Canada to her Romanian father, Ian, and Chinese mother Renee.

Ironically it was a Canadian who stood in her way at the final hurdle, and 19-year-old Fernandez did her best to turn the tide as she fought back after Raducanu missed two Championship points.

But there was nothing getting in the way of Raducanu this time, as she showed tremendous composure to see out the match and write her name in the history books.

Her parents were unable to be present at the final, but Raducanu revealed the message she had received from her father after speaking to him in the aftermath of her success.

"They’re watching from home, very proud. My dad said to me: ‘You’re even better than you’re Dad thought’, so that was reassuring.

"My Dad’s very tough to please but I managed to today.”

Raducanu spent her early years developing her tennis skills at Beckenham Tennis Club, and supporters watching back at home threw a raucous party to celebrate her win.

Fans gathered round televisions at her home club in Beckenham, including her former strength and conditioning coach Suzanne Williams, while congratulatory messages poured in.

Among the messages was one from none other than the Queen, who hailed Raducanu for setting an example for youngsters to follow.

"I send my congratulations to you on your success in winning the United States Open Tennis Championships," said the monarch in a personal message on the Royal Family website.

"It is a remarkable achievement at such a young age, and is testament to your hard work and dedication. I have no doubt your outstanding performance, and that of your opponent Leylah Fernandez, will inspire the next generation of tennis players." 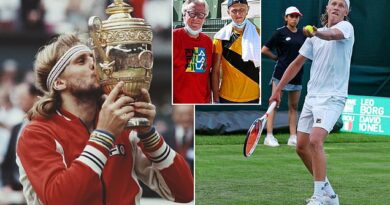 Bjorn again: Leo Borg ready to make a name for himself in tennis world 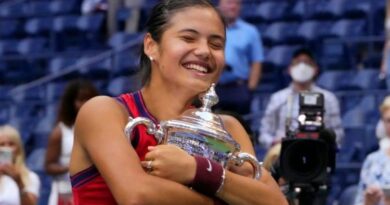