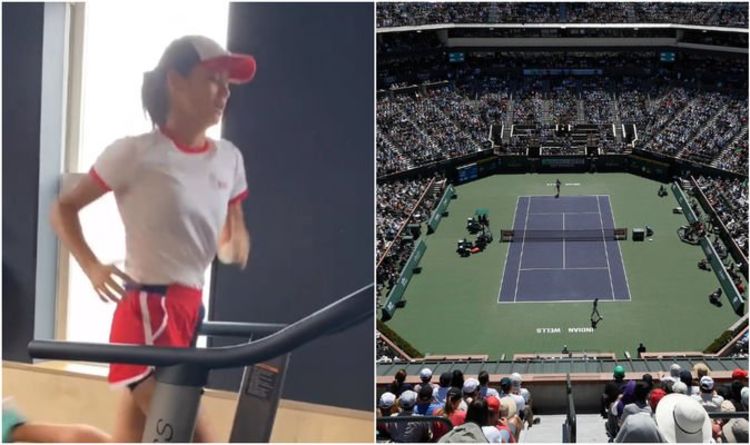 It’s been a whirlwind few weeks for Emma Raducanu, but now the hard work starts again. Following her sensational win at the US Open, the 18-year-old is back in training and preparing for her next tournament as she seeks to continue the form she produced at Flushing Meadows.

Having entered the tournament in New York ranked world number 150, Raducanu won three qualifying matches without dropping a set to secure her spot in the main draw.

There, Raducanu defeated Canada’s Leylah Fernandez 6-4 6-3, in what was the first all-teenage women’s singles final since the 1999 US Open. It made her the first British woman to claim a Grand Slam title since Virgina Wade won Wimbledon in 1977.

Furthermore, she became the first player in history to win a Slam after having to qualify.

JUST IN: The 7 closest people in Emma Raducanu’s life who helped make her a superstar

The teenage sensation is now expected to return to competitive action at the BNP Paribas Open at Indian Wells – which starts on October 6.

Raducanu is expected to be handed a wildcard into the main draw and compete in a high quality field which includes the likes of Ash Barty, Aryna Sabalenka, Karolina Plikova, and her final opponent in New York, Fernandez.

And according to her recent Instagram post, Raducanu is back and training and looking forward to a tournament that is considered one of the biggest outside the Grand Slams on the WTA tour.

She posted a short video clip of herself pounding away on the treadmill in a gym, along with the line “back with a sweat on.”

It’s the first footage of her back in training since she returned to home in Bromley, Kent, last week, and her participation at the BNP Paribas Open will be accompanied by frenzied media attention.

After winning the US Open, Raducanu made appearances on leading US breakfast TV shows, attended the prestigious Met Gala and visited the New York Stock Exchange. Since coming back to the UK, she has been a guest on both BBC Breakfast and Good Morning Britian.

Success in her next event won’t be straightforward, but a good omen exists for Raducanu in the form of Bianca Andreescu.

Back in 2019 Canadian player Andreescu, now 21, won both the BNP Paribas Open and the US Open, her maiden Grand Slam title, in the same season.

However, if Raducanu is to repeat that feat, she will have to do things the other way around. The BNP Paribas Open is traditionally held in the spring, but after being cancelled in 2020 is being player later in the season this time around after the tennis calendar was disrupted by Covid-19.

Novak Djokovic speaks out after disqualification at US Open

Wimbledon 2020 cancelled due to coronavirus pandemic