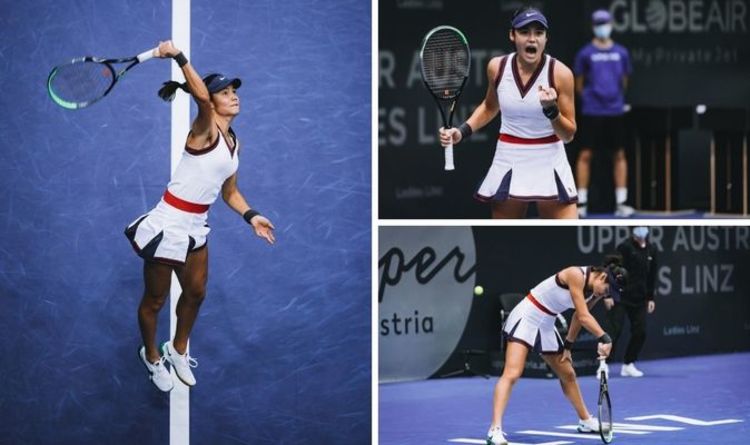 Emma Raducanu is set to finish her sensational breakout season on the WTA Tour inside the world’s top 20. The teenager finished her first season as a professional on a sour note, losing to world number 106 Wang Xinyu 6-1 6-7 (0-7) 7-5 in the first round of the Upper Austria Ladies Linz tournament.

It was a disappointing end to her breakthrough campaign as Raducanu was the top seed, but the 18-year-old is set to rest and recover ahead of the Australian Open and the start of the 2022 season.

Despite her early exit, the Brit is set to improve and move from number 20 in the rankings to number 19 from Monday.

Her changed ranking comes as Elise Mertens will drop five places from number 16 after a poor run of form.

Raducanu only broke into the top 20 this week as she climbed one spot after taking advantage of Belinda Bencic moving down six places.

She became only the fifth British woman to crack into the world’s top 20 after Virginia Wade, Sue Barker, Jo Durie and Johanna Konta.

With Mertens’ fall, the US Open champion will climb an extra spot.

It means there was a remarkable net gain of 326 places for Raducanu since the start of January with the bulk of her points coming from her stunning Flushing Meadows victory.

Raducanu burst onto the scene at Wimbledon, where she reached the fourth round before being forced to retire from her fourth-round match with Ajla Tomljanovic due to breathing difficulties.

After claiming her maiden Grand Slam victory in New York, the 2000 tour points took the Brit into the top 30 while she also picked up two wins at the WTA 250 event in Romania.

Raducanu is set to finish the year with 2627 points with most of those points achieved during the second half of the season.

It means the teenager will only start having points to defend from June next year, so she will be able to enjoy her high ranking for a while yet.

Raducanu this week named Torben Beltz as her new coach ahead of the 2022 season after the German split with Angelique Kerber.

She was reportedly keen to appoint a full-time coach with WTA Tour experience, and Beltz helped Kerber win Wimbledon in 2018, as well as the Australian Open and US Open in 2016.

News emerged on Monday that the duo had split, which means Beltz is free to join Raducanu for the offseason and the curtain-raiser in Melbourne in January.

The 44-year-old was photographed with Raducanu and her agent at a cafe close to her Bromley home on October 20.

Beltz did not have much of a playing career. He is said to have appeared in several low-level matches in the year 2000 but never achieved a professional ranking.

He has since gained a tremendous reputation as an effective and calming coach, which would seem to mesh well with Raducanu.

After splitting with coach Andrew Richardson, the 18-year-old said: “I really need someone right now that has had that WTA Tour experience at the high levels.”

Tennis: World No. 1 Ashleigh Barty pulls out of US Open over coronavirus fears

Rafael Nadal career prize money: How much has the US Open star made?