Anna Wintour, the Vogue fashion mogul, was back in Roger Federer’s box Tuesday night for his U.S. Open quarterfinal versus Grigor Dimitrov, decked out in her trademark black sunglasses.

Maybe this time Wintour shed a tear behind her shades as the longtime Federer fanatic watched him break down in Flushing as midnight closed in.

It is time. Father Time. The 38-year-old Swiss Maestro looked more like the Swiss Mess in the fifth set, when Dimitrov jumped to a 4-0 lead. Nobody wanted this upset except for the scattered green-and-red clad Bulgarian fans on hand, cheering on their compatriot, Dimitrov.

Stream live coverage of 2019 US Open with ESPN on KAYO SPORTS on your TV, computer, mobile or tablet. Get your 14-day free trial and start streaming instantly >

Federer’s drought in Flushing continued. He last won at the Open in 2008, when Donald Trump was a regular attendee in his own suite.

After the fourth set, Federer took a 10-minute medical time-out, heading to the back for treatment of his upper back and neck. Federer said it had started acting up that afternoon.

“Just needed to try to loosen it up, crack it and see if it was going to be better,’’ Federer said. “I fought with what I had.’’

Federer contemplates life during his marathon with Grigor Dimitrov.Source:AFP

It wasn’t much. Dimitrov drilled him 6-2 in the final set. Federer looked as if he were playing in slow motion, missing easy shots into the top of the net as Dimitrov controlled many of the baseline rallies. It was deja vu, recalling someone named John Millman knocking Federer out of Flushing in last September’s fourth round. Federer has lost his aura here.

The quarterfinal loss brings into focus — again — the question of how much Federer has left. Written off before, he has made a slew of comebacks.

“Do I think I’m going to get more opportunities?’’ Federer said when asked if he thinks he can pull off another Grand Slam title at 38 and counting. “I don’t have the crystal ball. Do you?

“So we never know. I hope so, of course. I think still it’s been a positive season. Disappointing now, but I’ll get back up, I’ll be all right. … I felt it the whole time. That’s it. I was able to play with it. My bad not to win.”

Federer read off his schedule for the rest of the year when asked. He’ll play the novel Laver Cup in late September in his native Switzerland, then an event in his hometown of Basel, the ATP indoors in Paris and the season-ending ATP Finals in London.

“That’s the schedule for now,’’ Federer said late Tuesday night. “I don’t know if the team have other ideas or not. I’m happy to get a bit of a break now, go back to practice, reassess and attack from there.”

Is this the real beginning of the end for the Fed Express?Source:AFP

When it was announced a year ago the Laver Cup would be in Geneva, Switzerland, it seemed a perfect way to bid adieu to the sport as its greatest player. The Laver Cup, created by his agent Tony Godsick, pits Europe against the World in team format.

Unfortunately, such a dramatic exit doesn’t appear on the horizon, though Federer has said when he makes the big retirement announcement, it will come with no notice, no hints.

The Open marches on, but won’t have two of the Big 3 as shoulder-impaired Novak Djokovic quit in the third set Sunday against Stan Wawrinka, down two sets and a break.

Federer had too much class to quit in the fifth set on Dimitrov, who had fallen off the map (ranked 78th) after once being called “Baby Federer,’’ but may have new life under his new tutor, Andre Agassi.

Though Rafael Nadal defeated Argentine Diego Schwartzman 6-4, 7-5, 6-2 to advance to the semi-finals, the absence of Federer and Djokovic is a reminder this golden age of the Big 3 won’t last forever.

When they are done, men’s tennis could be in for a dull period, especially if none of the American men emerge. (They had all disappeared by the end of the third round).

“As long as the Big 3 are around, night sessions at Arthur Ashe are covered,’’ Roddick told The Post. “They sell out Mason, Ohio, in the middle of summer. Once those guys move on, there will be a real vacuum of star power and crossover appeal. When the Big 3 move on, the need will be bigger (for Americans).’’

Roger Federer scratches his head after the loss.Source:AP

Roddick believes it’s “even money” who winds up with most Grand Slam titles among the Trio Grande. Federer is in the lead with 20, Nadal could get to 19 by Sunday. Djokovic is climbing at 16.

If Federer still wants to play next year and keep them honest at age 39, here’s hoping it will be his last go round.

Nobody wants to see this tennis artist, a five-time U.S. Open champion, lumbering around Flushing at age 40. We saw Willie Mays do it across the street as a Met and it wasn’t pretty. 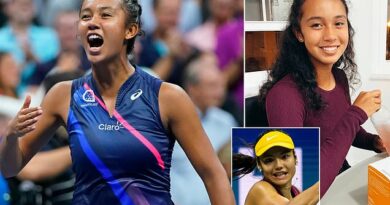