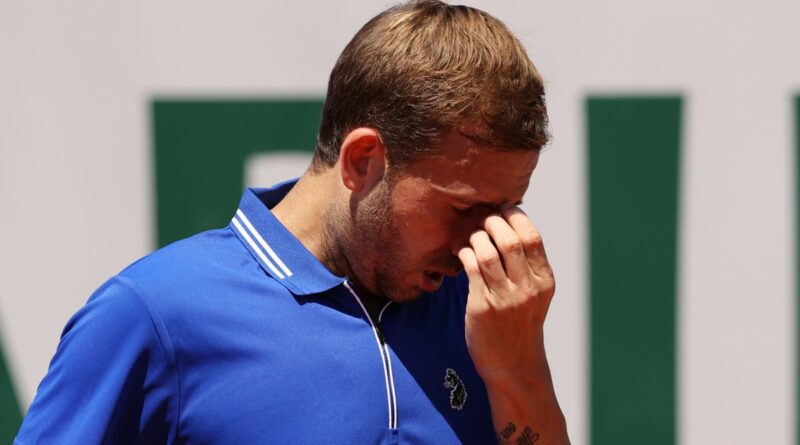 Dan Evans has been eliminated from the French Open with a four-set defeat by Miomir Kecmanovic.

Evans, Britain’s top-ranked men’s player, took the first frame with ease but ultimately fell to a 6-1 4-6 3-6 4-6 loss at Roland Garros in three hours and six minutes.

Evans, 31, entered the clay-court Grand Slam in fine form, but his wait for an appearance in the second round at the Paris tournament goes on.

The Briton reacted to the result by smashing his racquet against his chair and the court.

Serbia’s Kecmanovic, 21, will face Corentin Moutet or Laslo Dere in the next round.

Evans claimed his first ATP Tour title in February at the Murray River Open in Melbourne, securing him a new career-high ranking of 26 in the world.

In April, the 31-year-old achieved his first ever win against a world No 1 by beating Novak Djokovic in straight sets to reach the quarter-finals of the Monte-Carlo Masters – Evans’ first time in the last eight at a Masters event.

There, Evans beat David Goffin to reach his first ever Masters semi-final, but he came up short against eventual champion Stefanos Tsitsipas.