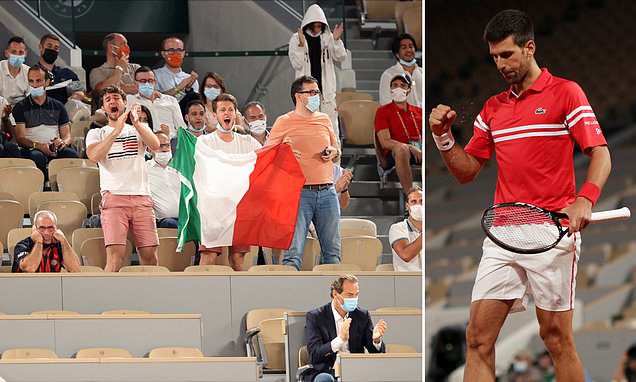 French Open descends into chaos as 5,000 fans are left furious after being made to LEAVE Novak Djokovic’s clash with Matteo Berrettini because of 11pm Covid curfew in Paris… before Serbian wraps up win to book semi-final showdown with Rafa Nadal

The French Open descended into chaos on Wednesday night as fans protested after they were asked to leave midway through Novak Djokovic’s clash with Matteo Berrettini because of Paris’ 11pm curfew.

Fans were allowed into the night session for the first time following a relaxation of Paris’ curfew from 9pm to 11pm, and the match even began ahead of schedule to try to ensure it could be completed in time.

It looked like that would be the case after Djokovic eased through the first two sets but the third was much closer and the Serbian unexpectedly became tight within sight of the finishing line, allowing Berrettini to push it to a fourth. 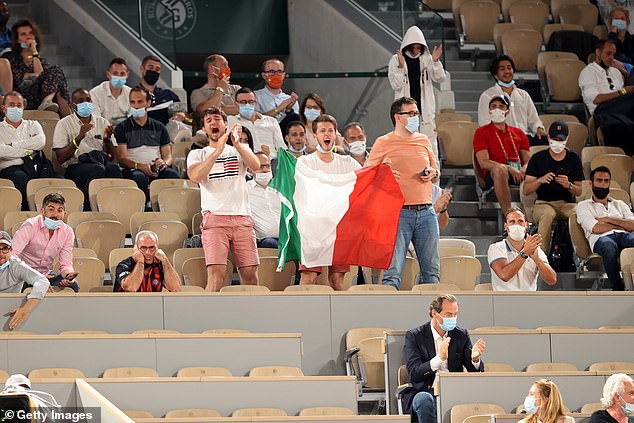 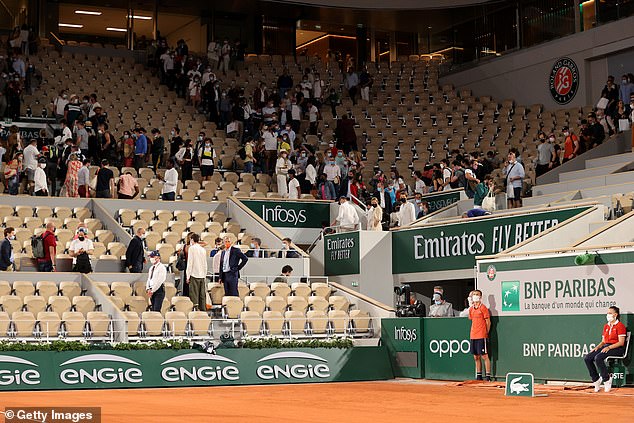 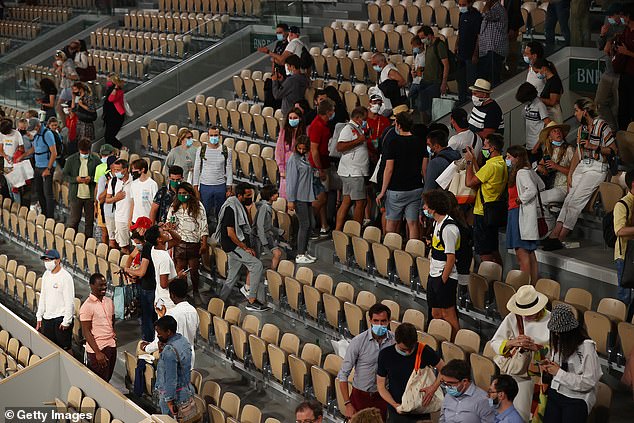 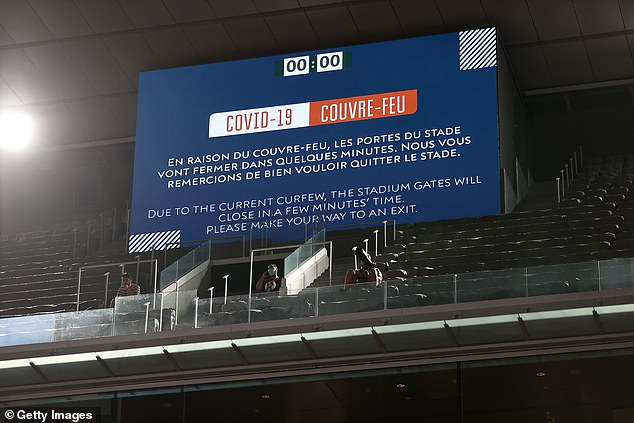 A sign tells the 5,000 supporters that the gate will be closing shortly but they refused to go

That made it inevitable the match would finish later than 11pm and boos rang out when the fans, who had created a very good atmosphere, were told they would have to leave.

The 5,000 fans were supposed to depart Court Philippe-Chatrier at 10:45pm but many did not and even started chanting ‘we’ve paid, we’ll stay.’ Others even jeered those who left.

At 10:55pm both players packed their bags and walked off down the tunnel while fans jeered and one shouted ‘Rip-off!’

It took 20 minutes before all the spectators were escorted out of the stadium and play restarted in virtual silence.

Djokovic eventually repelled a stirring fightback by Berrettini to claim a 6-3, 6-2, 6-7, 7-5 victory to set up a mouth-watering semi-final with defending champion Rafael Nadal.

Top seed Djokovic was given a mighty scare against Italian teenager Lorenzo Musetti on Monday, losing the first two sets, but seemed to be rolling towards a straightforward victory after moving two sets ahead against Berrettini. 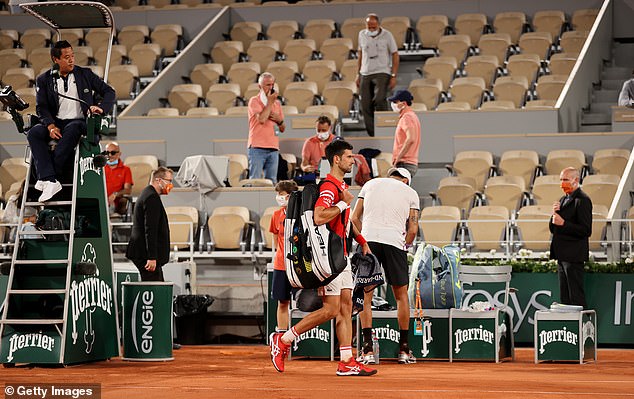 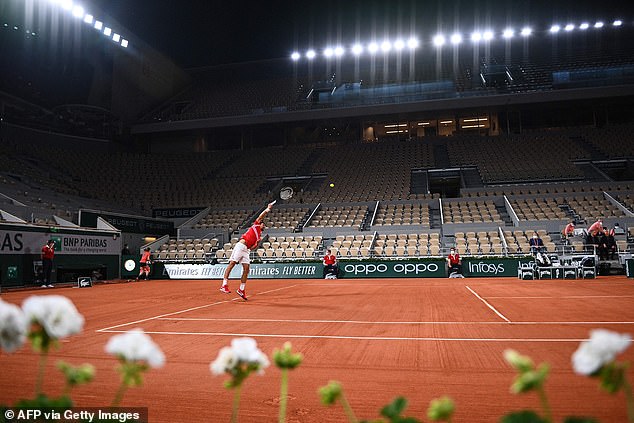 Djokovic broke serve for a 3-1 lead in the first set and after Berrettini failed to convert a break point when trailing 4-2 the Serb sealed the opening set in routine fashion.

A clinical Djokovic cruised through the second set but Berrettini dug his heels in throughout the third set without managing to fashion a break point.

With the crowd permitted getting behind the 25-year-old, Berrettini extended Djokovic into a tiebreak and bombed down a couple of aces and some venomous forehands.

Djokovic had the chance to serve for the match at 5-4, however, but a couple of uncharacteristic errors gave Berrettini a set point that he converted with another thudding forehand.

Suddenly an energised Berrettini looked dangerous but the drama was then halted as the 5,000 fans were ordered to leave when Djokovic led 3-2 on serve in the fourth set. 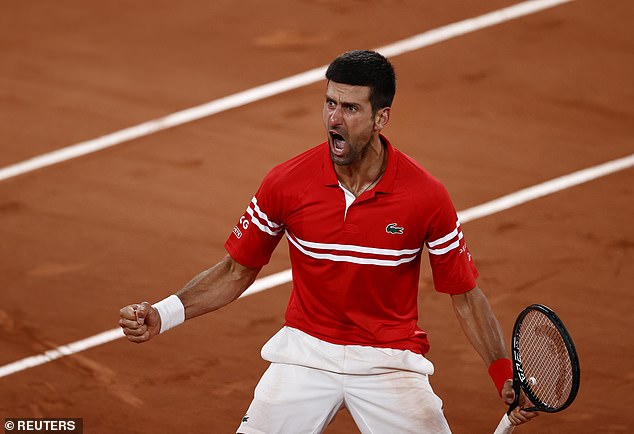 After the delay battle resumed in silence and despite a heavy fall which grazed his hand, Djokovic sensed his moment when Berrettini served at 5-6.

Djokovic vented his anger as Berrettini saved a second match point with a brutal forehand and he then produced a series of deafening roars aimed at his entourage after clinching the win at the third time of asking.

Earlier on Wednesday, Nadal shrugged off his first lost set at Roland Garros since 2019 to storm past Diego Schwartzman and into a 14th French Open semi-final.

The bad news for the rest of the men’s draw is Nadal has never lost once he has reached the last four in Paris.

For a while it looked like the admirable Schwartzman could cause a monumental upset but Nadal responded to a moment of apparent danger by turning up the dial and winning the final nine games. 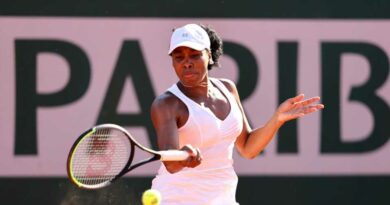