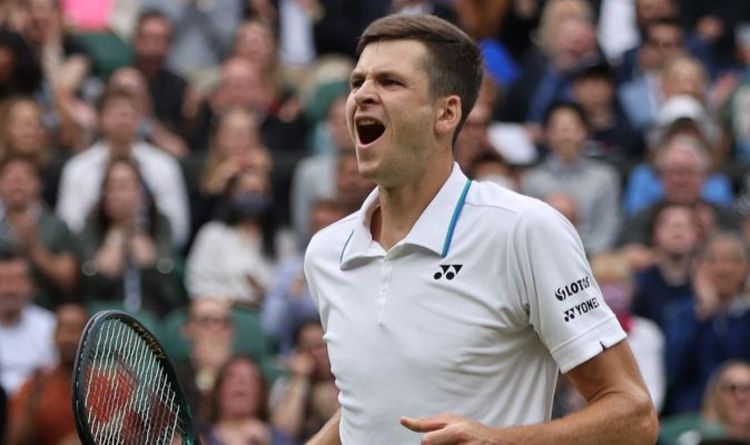 Hubert Hurkacz has described Roger Federer as an inspiration ahead of their quarter-final clash at Wimbledon. The two will face off at SW19 on Wednesday for a place in the final four after impressive victories in round four.

Medvedev led by two sets to one overnight but struggled to get going after the restart, helping Hurkacz seal a comeback triumph.

The 39-year-old sixth seed is still on course for a 21st Grand Slam after breezing past Italian Lorenzo Sonego 7-5 6-4 6-2 on Monday.

In his post-match interview on Centre Court, Hurkacz hailed the crowd for supporting him in such bizarre circumstances.

“Playing on this unbelievable court, the best court in the world with this magnificent crowd, is so special and means a lot to me,” Hurkacz explained.

“Daniil is an unbelievable player. We were battling on Court Two; then we came back to finish the match.

“He is number two in the world, has unbelievable skills but being able to win this match in front of you guys feels great.

“Stopping yesterday at the end of the fourth set was a first time for me, I had talks with my coach and worked with my physio to prepare for today and do the things better than yesterday.”

He also took time to laud his quarter-final opponent, Federer, who sealed passage into the last eight on ‘Manic Monday’.

Hurkacz labelled the 39-year-old an inspiration and explained his excitement ahead of the occasion.

He said: “For this sport, Roger is unbelievable, what he does, how he plays, and the titles he has won throughout his career.

“He inspired so many people and it’s going to be fun, but I’m hoping to get a little bit of support.”

Medvedev’s exit means Federer will now be expected to reach the final, where world number one Novak Djokovic will likely await.

If he gets past Hurkacz on Wednesday, the Swiss ace will next face the winner of tomorrow’s other quarter-final clash between Matteo Berrettini and Felix Auger Aliassime.

After the latter defeated Federer in Halle last month, it would set up a very exciting semi-final should both players secure passage from the last eight.