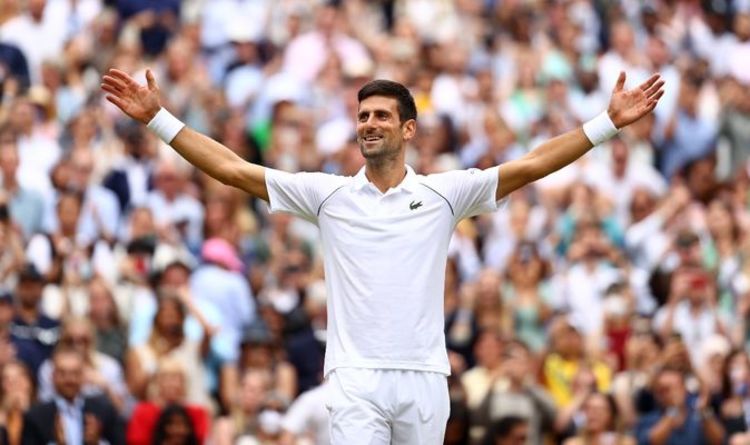 Novak Djokovic has confidently declared that he is “the best” after equalling Roger Federer and Rafael Nadal’s Grand Slam record at Wimbledon. Djokovic knew what was at stake entering the Wimbledon men’s final against Matteo Berrettini on Sunday.

The world No 1 was the strong favourite throughout the Wimbledon Championships.

But there was the added pressure that winning Wimbledon would finally see him draw level with Nadal and Federer in terms of Grand Slams won.

And that appeared to affect Djokovic in the first set as Berrettini came back from 5-2 down to take the early lead.

But the 34-year-old regained his composure in the second set and the result seemed inevitable from that point.

Berrettini pushed Djokovic to a new level, but the Serbian tennis superstar had every answer in the book.

A sliced backhand into the net from Berrettini eventually saw Djokovic crowned Wimbledon champion for the sixth time.

He’s now the strong favourite to finish with the most Grand Slams of all time, and could even break Margaret Court’s record of 24.

For Djokovic, he’s certainly not short of confidence in his own ability to keep creating history.

“I consider myself best and I believe that I am the best, otherwise I wouldn’t be talking confidently about winning slams and making history,” he said.

“But whether I’m the greatest of all time or not, I leave that debate to other people.

“I said before that it’s very difficult to compare the eras of tennis.

“It’s just completely different conditions that we’re playing in, so it’s very hard to compare tennis, say, from 50 years ago to today.

“But I am extremely honored to definitely be part of the conversation.”

The Golden Slam is also a potential for Djokovic, but he’s now not sure whether he will travel to the Olympics.

“I’ll have to think about it,” he said. “Right now, as I said, my plan was always to go to Olympic Games. But right now I’m a little bit divided. It’s kind of 50/50 because of what I heard in the last couple days.”