Home » Tennis » ‘I guess it wasn’t to be the last one’: Stosur wins first Australian Open match in six years, extends farewell lap

Shortly after extending her farewell lap at Melbourne Park to at least another round on Tuesday, Sam Stosur sat relieved in her courtside chair, taking in the celebrations.

The Australian has enjoyed some moments of magnitude in her career that might appear, at first glance, to be vastly more important than her 6-7 (5) 6-3 6-3 win over Robin Anderson.

But with the finish line a stride or two away in her 20th, and last, Australian Open, every additional point played, or game won, or victory claimed, is one to celebrate. 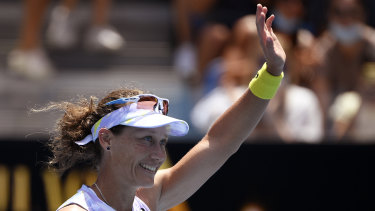 Samantha Stosur waves to the Melbourne crowd after her coming back from losing the first set to defeat Robin Anderson.Credit:AP Photo

“Man, that was incredible. That’s a match I’m going to remember forever,” she said.

“It is one of the best singles matches I have played in a very long time. And to do it at home today, I guess it wasn’t to be the last one, so (I’m) happy to have another one.”

In the stands, her coach Rennae Stubbs shed a tear.

Later, when spotting a television camera pointed in her direction, the doubles great pumped her fists in triumph for Stosur, a former rival to whom she has become a close friend and mentor.

“It is incredible. Stubbsy and I go way back, being competitors, doubles partners, and now she is my coach,” Stosur said.

On this trip to Melbourne Park, the anxiety related more to whether Stosur would produce a performance befitting what has proven an incredible career, in all bar the city she resides.

It is six years since the 37-year-old last won a match in Melbourne and her emotions towards the Australian Open will feel forever mixed.

The angst of carrying the burden of local hope after her stunning triumph in New York in 2011, when she defeated Serena Williams to win the US Open, has stifled her at home. 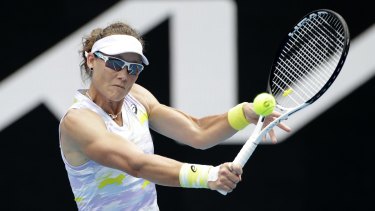 Stosur plays a backhand in her first round singles match.Credit:Getty Images

But with the victory over Anderson, Stosur edged into positive territory in Melbourne.

She has won 20 of the 39 singles matches she has played in the Australian Open. Only at Wimbledon has she fared worse.

In comparison, the 2010 French Open finalist has a strike rate of 71 percent on the red dirt of Roland Garros, where she has consistently performed.

The win over Anderson, who enjoyed the moment of her career simply by setting foot on the court in a grand slam, was seized only after a nervous start befitting her struggles here.

But the longer the match went, the more the Queenslander found her rhythm and displayed the variety that made her an outstanding singles player at her best.

This was particularly evident in the angles and depth she started to find on her backhand slice.

Her placement was either more acute, which stretched the American wildcard, or carried more depth, which prevented the right-hander from New Jersey from attacking.

In rallies, the difference in weapons between one of four active players who has won a grand slam in every discipline, compared to a woman in her first major, became more apparent.

So, too, the weight of the inner-Melbourne resident’s forehand and the powerful kick in her serve, which remain weapons to match the best in the world.

It helped her carry the day. Stosur will be back again on Thursday, where she will bid to reach the third round at home for the first time in her 30s. Her approach will be the same again.

“It has been the goal coming into the last couple of months playing singles, to enjoy myself (and) try and play as best as I can,” she said.

“Every time I have been able to do that in my career, I enjoyed it. Win or lose, that is all you can ask for.”

Watch all the action of the Australian Open on Nine and 9Gem. 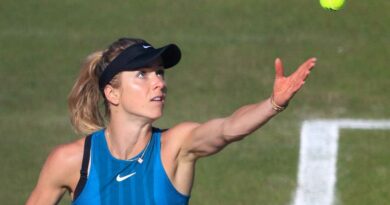 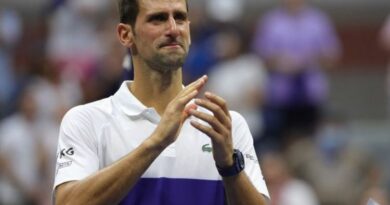