Home » Tennis » ‘I have a massive chip on my shoulder’: Quarter-finalist Kyrgios vows never to forget critics

London: For the second time in four matches at Wimbledon, Nick Kyrgios has drawn motivation from his critics to find a way to win, the controversial Australian equalling his best grand slam result by reaching the All England club quarter-finals on Monday.

Declaring that he never forgets what is said or written about him, unseeded Kyrgios added to the body of evidence that he’s a genuine Wimbledon title chance by surviving a tough five-setter against American Brandon Nakashima on centre court. 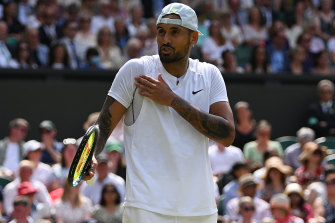 Nick Kyrgios during his match against Brandon Nakashima.Credit:Getty Images

The 1987 Wimbledon champion Pat Cash and one of the sport’s greats, Mats Wilander, were among those to have Kyrgios in their sights for the sometimes ugly way his third-round win over Stefanos Tsitsipas played out. Australian great Cash said his countryman was guilty of poor gamesmanship.

“He’s brought tennis to the lowest level I can see as far as gamesmanship, cheating, manipulation, abuse, aggressive behaviour to umpires, to linesmen,” Cash had said on the BBC.

Kyrgios, 27, too, is certain to again draw the ire of Wimbledon organisers after he put on a red cap and red shoes while still on court following the win over Nakashima – a clear breach of the club’s all-white dress policy.

Asked about the stinging criticism from Cash after Kyrgios eliminated leading chance Tsitsipas in an ill-tempered clash, Kyrgios said: “Honestly, I don’t care. Like, I just smile. Like, it’s so funny.

“I joke around with my team about it so much. Like, it’s hilarious.

“I almost just wake up and read things, and I just laugh. And I never forget things, like the people say, whether it was three, four years ago, things that just stick with me.

“I have a massive chip on my shoulder. Like I sit here now in quarter-finals Wimbledon again, and I just know there’s so many people that are so upset.”

Kyrgios revealed his personal pride, however, after finally getting to the final eight at the majors for just the third time, eight years after he managed the feat as a 19-year-old Wimbledon debutant, after some turbulent personal and professional periods. He also reached the Australian Open quarters in 2015. It has been a long time between drinks.

“There was a time where I was having to be forced out of a pub at 4am to play Nadal second round,” reflected Kyrgios.

“My agent had to come get me out of a pub at 4am before I played my match on centre court Wimbledon. I’ve come a long way, that’s for sure.”

Kyrgios was unrepentant for donning his shoes and cap post-match, engaging in a verbal stoush with a British reporter about whether he should be punished by officials.

Asked why he committed the breach, Kyrgios said: “Because I do what I want.”

Quizzed then on whether he considered himself “above the rules” and whether they should apply to him as they do to all players, Kyrgios said: “No, I’m not above the rules … I just like wearing my Jordans.”

Asked directly about whether he bemoans the controversy, scrutiny and attention that inevitably follows him, the Canberran said: “I don’t moan. I love it. More attention for me. What’s that’s saying? Any publicity is good publicity, right?”

Kyrgios’ patterns through four rounds have zigged and zagged, the spitting on court controversy that raged after his drawn-out five-set win over British wildcard Paul Jubb in the first round followed by a sublime second-round win against seeded Serbian Filip Krajinovic, a one-hour and 25-minute demolition that featured 50 winners and just 10 unforced errors.

Against Tsitsipas, the Australian bounced back from dropping the first set to win in four dramatic sets. On Monday, Kyrgios overcame an early shoulder niggle, receiving on-court treatment more than once and taking painkillers before the complaint seemed to no longer bother him.

“I woke up after [the] Tsitsipas [match] and had some shoulder pain. I’ve played so much tennis in the last month and a half, so I almost knew that it was time for my body to start feeling some niggles,” Kyrgios said.

“Mentally I feel like I just deal with these things a lot better now. I knew today I wasn’t feeling 100 per cent, but mentally I stayed quite calm, you know, knowing I wasn’t able to serve full out for the whole five sets.”

Kyrgios explained how he upset the 20-year-old Californian’s rhythm late in the fourth set before he cleaned up the match in style with a 6-2 final set.

“I knew from the get-go I wasn’t playing as well as I would have liked. I wasn’t feeling the ball like I was against Tsitsipas or Krajinovic,” he said.

“I knew I had to keep my head down and just battle today. It was a good mental performance.

“At the end of the fourth, [I applied a] complete rope-a-dope tactic. I just threw away that service game. I knew he was in a rhythm. He was starting to get on top of me. I kind of just wanted to throw him off a little bit. It worked.”

Kyrgios meets Cristian Garin in the quarters after the Chilean took more than 4½ hours to beat Australian Alex de Minaur on Monday. 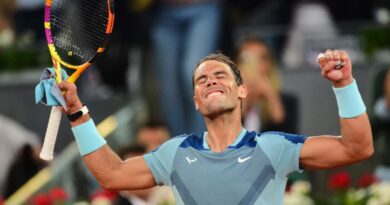 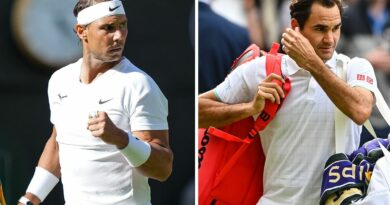