Home » Tennis » ‘I will test positive, I’m telling you’: Tomic out of Australian Open qualifying

Bernard Tomic’s attempt to qualify for the Australian Open is over, but not before the outspoken Australian claimed mid-match he was suffering from COVID-19 and there was insufficient testing of players.

The 29-year-old, a one-time junior champion at Melbourne Park, fell to Russia’s Roman Safiullin 6-1, 6-4 in the first round of qualifying.

His Australian Open campaign was done after less than one hour on court, succumbing to world No.167 Safiullin on the new 5000-seat arena at Melbourne Park.

Ranked 257th in the world, Tomic revealed his new-look bleached hairstyle look to a new audience, but it was ability to counter controversy that hadn’t changed.

Trailing 2-1 at the change of ends in the second set, Tomic told the chair umpire, Brazilian Aline Da Rocha Nocinto, he was physically hampered.

“I will buy you dinner if I don’t test positive in three days. Otherwise you buy me dinner,” Tomic said.

“I cannot believe nobody is getting tested. They are allowing players to come onto the court with rapid tests in their room – c’mon.

Tomic was unavailable for post-match media commitments due to the uncertainty over his health after he reported his symptoms.

He later posted in an Instagram story: “Feeling really sick, I’m now back in my hotel room.

“Just spoke to the doctors on site and they’ve asked me to isolate. They couldn’t treat me yet to avoid contact.

“Thank you for all the support on the court today. I really appreciate it! I’ll do better next time. Very disappointed as I really wanted to make Aussies proud and perform well on my home turf.”

A world No.17 six years ago, he enters the 2022 season with his 30th birthday on the not-too-distant horizon.

Before this qualifying campaign for his home major – the latest attempt to reboot his career – Tomic had declared he was striving to once again find a spot in the world’s top 20.

Before the tough match against Safiullin, Tomic declared he wasn’t match fit but said “I’m feeling fresh and ready to go”.

“I feel really good,” Tomic said. “I feel like I’ve settled in because I’ve been at the AO for a few days now. I feel really relaxed. I’m happy in myself. I’m happy to be here.

“I feel like it’s one of the toughest matches in qualifiers that I’ve been drawn. We both qualified last year, so it’s a tough challenge to get him first round.”

It was only 11 months ago in Melbourne when the 2008 Australian Open junior champion started the season in promising fashion, fighting his way through three Australian Open qualifying matches to make the main draw of a major for the only time since Wimbledon in 2019.

He edged countryman John-Patrick Smith at the final qualifying stage. His first round opponent, Yuichi Sugita of Japan, retired hurt before Tomic met a younger and formidable foe in the second round, rising Canadian Denis Shapovalov.

It’s also three years, however, since Tomic’s antics formed a distracting sideshow at the 2019 Australian Open when the Queenslander, after his first round exit, launched a broadside at Lleyton Hewitt, claiming that the Australian Davis Cup captain had “ruined the system” and “no one likes him”. Famously, Tomic also claimed the two-time major winner favoured certain players with national selection, prompting a tit-for-tat with Australian tennis officialdom that lasted for most of the tournament.

By the end, Tennis Australia boss Craig Tiley slammed the door on Tomic and any hopes he had of returning to the Davis Cup fold, declaring that the then 26-year-old “does not meet the standards of behaviour and commitment to himself, the team or the sport”. 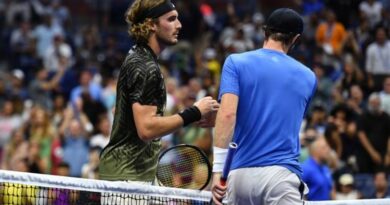