Having realised a childhood dream in winning Wimbledon, world No.1 Ashleigh Barty now embarks on a fresh assault to end one of the most significant droughts in Australian sport: the nation’s 44-year wait to produce another home-grown Australian Open singles champion.

There’s an overwhelming sense that the time is now for 25-year-old Barty. She’s refreshed after ending her 2021 season early, she is the season-ending top-ranked woman for a third straight year and she pocketed another title in Adelaide last week. 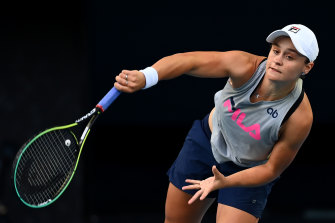 Ashleigh Barty puts in the hard work on Saturday ahead of her latest Australian Open bid.Credit:Getty Images

Defending Australian Open champion Naomi Osaka, probably her biggest challenger, returns to the tour after a break to look after her mental health.

Ideally primed for Melbourne’s Plexicushion hardcourts this coming fortnight, Barty must only either forget the near misses of the past two years in Melbourne, or draw lessons from them.

There was heartbreak in 2020 when eventual champion Sofia Kenin shocked her in the semi-finals. In eerily similar circumstances last year, Karolina Muchova got the better of Barty in three sets after the Czech found her rhythm after a controversial medical time-out.

Both times Barty slipped up at some key moments.

Asked whether she ponders on these moments or simply resigns them to history, Barty, in an interview with The Age and Sydney Morning Herald, said: “A little bit of both.

“There’s obviously a brief moment once we finish the event we go back and debrief what had happened, but I’m also one to move on pretty quickly, and not dwell or get too excited about certain feelings or certain moments.

“[In] every single Australian Open for me there’s been nothing but positive learnings and good feelings coming out of it. Let’s see what this one brings.”

Regardless, top seed Barty and her trusted team will maintain a level-headed approach to all outcomes – a philosophy that has enabled her to thrive during her time at the top. 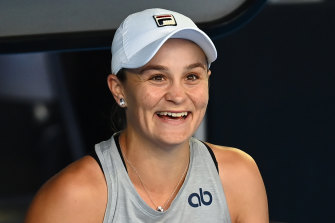 Ash Barty has a laugh during practice.Credit:Getty Images

“There is certainly a regimen and a routine that we follow, but in saying that we also have fun, that’s one of the most important things in the way we’ve gone about it in the last couple of years – to enjoy ourselves and not take life too seriously,” said the Queenslander. “Be really present in the moment and enjoy it for what it is.”

The hype will come for Barty but, right now, it’s noticeably different in 2022, compared to the past two campaigns when Barty also carried the No.1 ranking into the first major of the year.

She’ll embrace every moment and every challenge with a smile: Barty filmed a campaign for Uber Eats that will air during the Australian Open.

“Putting myself in a situation looking at Pat Rafter’s hair burning was something that I never thought I’d do, but it was certainly a fun experience,” she said with a laugh. 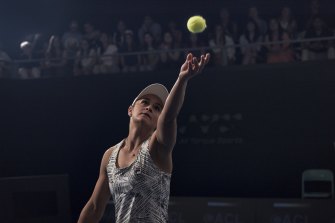 Ashleigh Barty, seen in the commercial.

Not only did a memorable 2021 include five titles and a stunning triumph at Wimbledon – after injury caused her to pull out of Roland Garros – but Barty became engaged to long-time boyfriend Gary Kissick.

And having spent so much time on the road, Barty – a natural home-body – reflected on finally being able to celebrate her Wimbledon heroics with family in person.

“It was a bit weird because [when it happened] it felt like it was so long after the fact,” Barty said.

“It took a bit of a moment to realise [the significance of it]. I hadn’t seen my family for seven and a half months, and that was more exciting than seeing them after Wimbledon, if that makes sense.

“Just the time away and being able to catch up with them as my mum and dad first, and as my siblings first, was more important than catching up to celebrate a result.”

Attention will eventually switch away from the Novak Djokovic saga and onto Barty and co: the other world No.1 has her own cause this January.

While several players on Saturday lamented the damage the saga was doing to the sport, Barty did not want to bite.

“I spoke about it a little last week,” she said. “What Novak is going through – obviously at the moment it’s in the courts and we can’t really comment on it. But I just genuinely have no interest in speaking about it.”

Earlier, before the world’s media, Barty was pressed as to what it would mean to become the first Australian winner in Melbourne since Christine O’Neil in 1978.

“I just have to hope that everyone understands that I’m giving it my best crack. It doesn’t always work out exactly how you want to. But you go about it the right way, you do the right things and try and give yourself the best chance, that’s all you can do.

“That goes for all the other Aussies as well, everyone else in the draw. They’re trying to do that thing over and over and over, do the right things and give themselves the chance.” 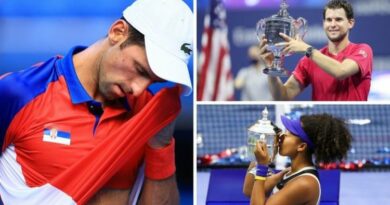 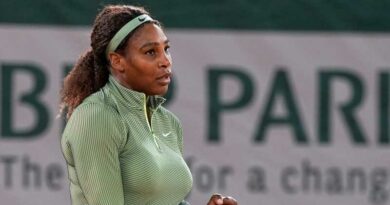