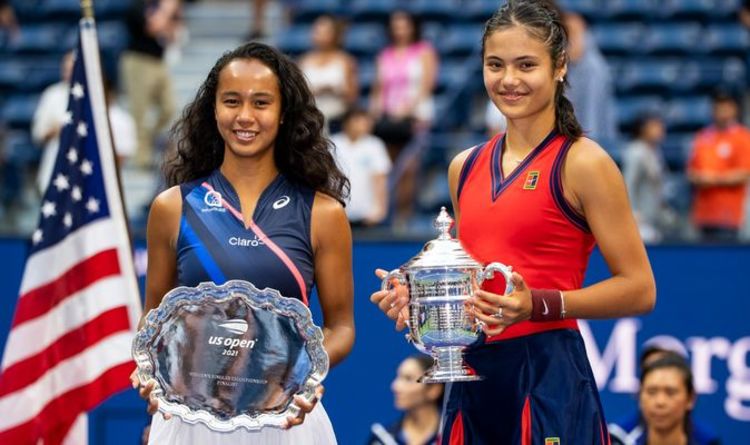 Leylah Annie Fernandez has admitted she is still struggling to “accept” her loss to Emma Raducanu in the US Open final. The pair played the first all-teenage US Open final since Serena Williams faced Martina Hingis in 1999. It was the young Brit who came away the victor, making history as the first-ever qualifier to win a Grand Slam title.

Fernandez enjoyed a hugely successful tournament at the US Open earlier this year.

The young Canadian sensation had already won her maiden title earlier in the season, at the Monterrey WTA 250 event back in March, but propelled herself to the upper echelons of the game after coming to Flushing Meadows ranked outside of the world’s top 75.

However, her run ended with a straight-set loss to Raducanu in the final, as the then-18-year-old secured a 6-4 6-3 victory to win the US Open, in what was just her fourth ever pro tournament.

Fernandez now ends the year ranked at world No 24 after starting the season down at No 88, and has opened up on her goals for the future.

“I have to improve my whole game,” the teenager told ESPN.

“Improve my forehand, my serve, my volley, everything by two or three percent to be among the [top] ten in the ranking, among the [top] five, and one day at No 1 and win a Grand Slam.”

While the Canadian has enjoyed the best season of her young career, she also admitted she was yet to get over her defeat to Raducanu in the US Open final back in September.

She added: “I still can’t accept that [US Open] defeat, but I learned what I can teach the world and that I can play against the greats.”

Fernandez has only played one tournament since her impressive run in New York, at the 1000-point event in Indian Wells less than a month after her US Open final showing.

She made it to the third-round, defeating ninth seed and French Open runner-up Anastasia Pavlyuchenkova en route, but lost to American Shelby Rogers in a third-set tiebreak in the round of 16.

The 19-year-old has not played since the tournament often dubbed the ‘fifth Grand Slam’, but will be joining nine of the world’s top 10 at the WTA 500 event in Adelaide on January 2, in the lead-up to the Australian Open.

As for her US Open finals opponent, Raducanu played just three more tournaments after becoming the first qualifier to win a Major.

The Bromley local made an unsuccessful return to the match court in Indian Wells, losing to then-world No 100 Aliaksandra Sasnovich.

She then played the WTA 250 event in Transylvania, notching her first-ever win on the WTA Tour in what was also her first-ever three-set match at pro level in her opening round against Polona Hercog, then following it up with a victory over Ana Bogdan before losing the quarter-final to fellow teenage sensation Marta Kostyuk.

Raducanu lost the first match of her season-ending event in Linz, and will be starting 2022 in Melbourne for one of the two WTA 250 tournaments, alongside the likes of her “idol” and former world No 1 Simona Halep.