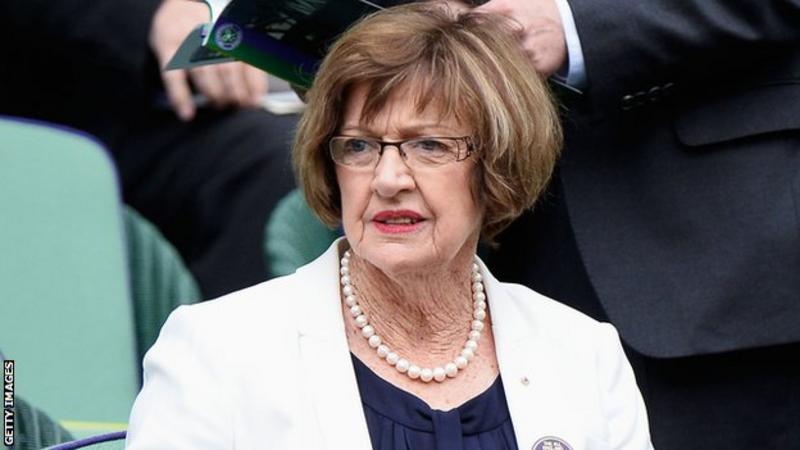 Tennis Australia has reiterated its stance against Margaret Court’s “demeaning” personal views while announcing it will “recognise” the 50th anniversary of her Grand Slam at next year’s Australian Open.

In 2003, Melbourne Park’s Court One was renamed the Margaret Court Arena.

However, there have been recent calls for it to be renamed because of Court’s opposition to same-sex marriage.

In 2017, Court – who won a record 24 Grand Slam singles titles – said tennis was “full of lesbians” and that transgender children were the work of “the devil”.

Now a Christian pastor, she had previously said she would not fly on Australian airline Qantas “where possible” in protest at its support of same-sex marriage.

Tennis Australia has invited Court, her family and friends to the tournament – which starts on 20 January – where she will participate in a “significant programme of events”.

“This is an incredible milestone for me, and I can’t quite believe how quickly the time has gone. It’s always wonderful to catch up with my fellow legends and I’m grateful to Tennis Australia,” said Court.

“Tennis is a wonderful sport and I’m proud to be part of the history of our great game.”

Tennis Australia said it respects Court’s “unmatched tennis career” but said her views “do not align” with its values of “equality, diversity and inclusion”.

“As often stated, Tennis Australia does not agree with Margaret’s personal views, which have demeaned and hurt many in our community over a number of years,” the governing body said in a statement.

In an open letter, it also said it would not “rewrite history” concerning Court’s achievements.

“Tennis Australia recognises the champions in our sport as a matter of course, whether it be stadium names, naming of parks, statues around the country and trophies and awards during a player’s career,” it added.

“We celebrate sporting heroes who inspire and motivate people through the generations, and who are lauded and respected widely by their peers and the broader community.

“As with other great sports in this country and elsewhere, it is common practice to draw a distinction between recognising champions and celebrating heroes, and it is an important distinction.

“However, the philosophy and culture of our sport goes deeper than winning and setting records. We seek to foster a sport that is inclusive and welcoming of everyone.

“We all bear some responsibility for creating a safe and inclusive society. As a sport, tennis is unwavering in playing our part.”

Felix Auger-Aliassime: All you need to know about the Canadian player