London: Rafael Nadal may appear an unlikely traditionalist given the way he has ripped up the tennis blueprint in the past 15 years but some aspects of the sport, he believes, should not change.

Fans are not the only thing missing from this year's ATP Finals which is being held in London for the 12th and last time. 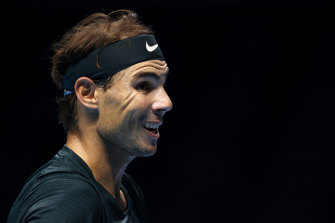 Rafael Nadal reacts during his loss to Dominic Thiem at the ATP Finals in London.Credit:Getty Images

"I don't want to create controversy, but I think the traditional court with line judges looks much nicer," the 34-year-old Spaniard said after his 7-6 (9-7), 7-6 (7-4) loss to Austria's Dominic Thiem on Tuesday.

"Novak said line judges were not needed. All opinions are respected. There are different visions of the sport, but for me I like it less without line judges.

"It's welcome here so we can adapt to the circumstances but if you ask me towards the future I prefer line judges. It's true the sport has not changed many things in the last 50 years, compared with the majority of sports, but I don't think this is a way to improve the spectacle of our sport."

Nadal said the "human element" on the court was important and said that if line judges are removed, the next step could be to remove chair umpires as well.

"The technology is there, it could be just the two of us in the court if we want," he said. "But I think the human side gives some more value somehow to the sport."

Nadal's defeat means he must beat Stefanos Tsitsipas on Thursday to keep alive his hopes of winning the ATP Finals title for the first time in his glittering career.

Not that his defeat by Thiem in a scintillating clash had shaken his confidence too much.

"I think my chances are better to have a very good result now than they were five days ago because the level of tennis, even if I lost today, for me is much higher," he said.

Thiem produced a fearless display of attacking tennis to beat Nadal in their high-quality duel.

World No.3 Thiem saved a couple of set points in the first tie-breaker before whipping away a forehand to take an opening set in which there was barely anything between the two.

Nadal engineered the first break of the match at 3-3 in the second set only for Thiem to reply in stunning fashion.

Nadal was on the brink of defeat when he slipped 0-40 behind serving at 4-5 after a wayward smash, but the 20-time grand slam champion dug himself out of a hole, saving three match points. 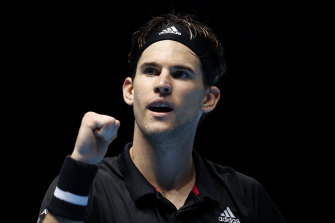 Dominic Thiem is in strong form at the ATP Finals.Credit:Getty Images

US Open champion Thiem was unshakeable, however, and forged his way into a 6-3 lead in the day's second tie-breaker.

"It was a great match from the first to the last point," Thiem, now well and truly established as a major force in the men's game, said after his sixth career win over Nadal in their 15 meetings and third in the last four.

"Actually I was a bit lucky to get the first set, I was 2-5 down in the tiebreak and against Rafa it's nice to win the first set. It's tough times for everyone at the moment and I hope we put on a good show for people watching on TV."