Australian Open: Nadal 'Kyrgios is one of the highest talents’

Nick Kyrgios has announced an end to his 2021 season following the worst loss in Laver Cup history for Team World. The Aussie played one singles match and one doubles match at the Ryder Cup-style tournament but lost both, and has since admitted he has been dealing with a knee issue for several months.

Kyrgios has played few tournaments in the last year, opting to stay home in Australia throughout most of the pandemic.

He returned to the tour at the start of the season for the Australian hard court summer, and did not play again until Wimbledon this year – his first tournament outside of his home country since February 2020.

The 26-year-old’s comeback was short-lived, as he was forced to retire injured during his third-round clash with Felix Auger-Aliassime, having made a flying start by taking the first set 6-2 before dropping the second 6-1.

The world No 96 then began his North American hard court season with an impressive win over two-time Grand Slam finalist Kevin Anderson in Atlanta before falling to Britain’s Cam Norrie, and subsequently lost his opening match in every tournament he entered after.

There were signs the six-time title winner was already hampered by injury, as he withdrew from his highly-anticipated first-round clash with Andy Murray at the Winston-Salem Open shortly before they were due to take to court, citing a left knee injury.

The Australian has now opened up on the injury he said has left him nowhere near “100% healthy” over the last couple of months, and ended his season to fly home with plans to receive treatment on his left knee.

“Hey guys, over the last couple of months I haven’t been near 100% healthy,” Kyrgios wrote on his Instagram story, announcing his decision to shut down his 2021 season after the Laver Cup.

“I’ve been dealing with left knee patella tendonopothy and continuing to play without fully treating it can lead to further pain and greater setbacks.”

The former world No 13 has recently dropped several retirement hints during the Laver Cup weekend, admitting he didn’t know how much longer he’d be around the tour.

Kyrgios also declared that the team tournament was “definitely” his last of the year before posting an injury update to social media, saying he wanted to go back and see his mum who was not “doing too well with her health.”

It seems the 26-year-old is also planning to treat and recover his troublesome left knee while at home, and despite casting doubt over his future in tennis, has made it clear he hopes to be back in time for next year’s Australian Open.

He continued: “I’ve chosen to fly back to Australia to re assess and am planning to get PRP treatment to settle down and rehab my knee.

“I’m disappointed it has kept me from playing my best tennis and hopefully with everything going smoothly I’ll be back to 100% by the Australian Open. All love.”

The 2022 Australian Open begins on January 17, with plans already being discussed for a ‘quarantine bubble’ for those needing to fly in for the tournament.

It is looking increasingly likely that players looking to play in Australia at the start of next season may need to skip Christmas in order to catch the charter flights bringing in tournament personnel for their two-week quarantine.

The likes of recent US Open champion Emma Raducanu have already admitted they would be happy to miss Christmas to play in the first Grand Slam of the year, with the new world No 22 saying: “It’s not even a battle in my mind. I want to be at the Australian Open, so whatever it takes to do, I’ll go.”
Source: Read Full Article 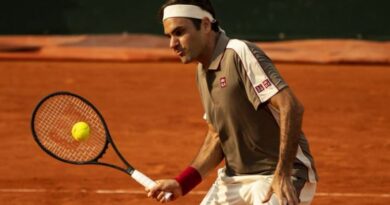