Novak Djokovic staged a remarkable fightback after a mid-match meltdown to claim his eighth Australian Open title and return to world No.1.

Djokovic has now won 17 Grand Slam titles – to close within three of Roger Federer's men's record – and extended the Big Three's domination of Majors to an unlucky 13 for the younger generation.

And the last three men's Grand Slams finals have gone to five epic sets, with Wimbledon champion Djokovic winning two to underline his status as one of the greatest – if not most popular – players of all time.

The Serb had won his seven previous Melbourne finals and seemed set to extend his record after cruising to the first set despite telling the pro-Thiem crowd to “Shut the **** up”.

But serving to stay in the second set at 4-5, the defending champion was hit with two time violations by umpire Dumusois – the second leading to a loss of his first serve on set point.

When Djokovic lost the game and the set, he touched the Frenchman on the foot in sarcastic congratulations and said: “Great job man. Especially the second one. You made yourself famous. Well done.”

The Serb lost six games in a row from 4-4 to fall 0-4 down in the third set and called for the doctor and trainer at the changeover at 1-4. His service speeds were down and he was clearly struggling as he repeatedly requested energy drinks from his team.

Thiem, who was pounding his forehand, finally closed out the third set with his fourth set point to leave Djokovic facing a task he had never achieved – coming back from two sets to one in a Major finals.

He took a five-minute medical to leave the 26-year-old thinking about being one set away from his first Major title.

Chelsea fan Thiem had a break point to lead 2-1 in the fourth set but Djokovic fought back to hold and break the Austrian to lead 5-3 before levelling up the match with an ace. He made only five errors in the 42-minute set.

Djokovic broke to lead 2-1 in the decider – and the crucially saved two break points in the next game to go 3-1 up before taking his first match point when Thiem pulled a forehand wide.

Djokovic is the first man in Open era – and only second after Ken Rosewall – to win Grand Slam titles in three different decades.

“It was a tough match and you were close,” he said to Thiem in the presentation ceremony. I am sure you will one of the Grand Slam trophies, more than one. This is my favourite court and favourite staidum in the world and I am blessed to hold this trophy again.”

Djokovic wore KB and the numbers 24 and 8 with a heart on tracksuit top in tribute to his late friend Kobe Bryant – and he also mentioned the Australian bushfires.

“I would just like to say that this is a reminder to all of us that we should stick together more than ever now,” he said. “Stay close to the people who love you and care about you.”

The new world No.4 Thiem said: “Huge congats to Novak – amazing achievement. You and two other guys have brought tennis to a new level. I fell a little bit short today but I hope I can get revenge soon.” 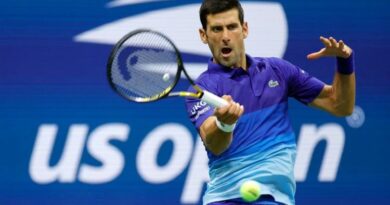