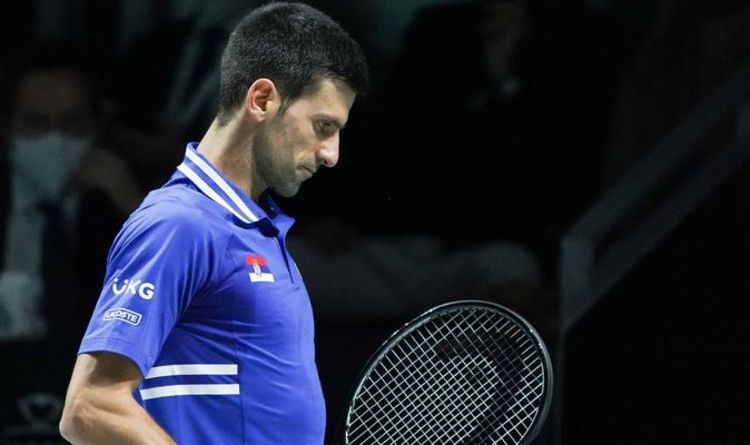 Novak Djokovic faces the possibility of being banned from Australia in the midst of chaos surrounding his visa and medical exemption. The world No 1 announced that he would be flying to Melbourne for the upcoming Australian Open after receiving a medical exemption, but when landing in the country had his visa cancelled following an overnight stand-off with Border Force.

Djokovic announced on Tuesday that he had received “an exemption permission” for the Australian Open and would be flying to Melbourne ahead of the first major tournament of the season.

But while the world No 1 was mid-air on his way Down Under, Australia’s Border Force (ABF) found and issue with his visa and, upon landing in Melbourne’s Tullamarine Airport, Djokovic was escorted away from his team by Border officials who spent the night questioning him in a room at the airport.

On Thursday morning local time, his visa was cancelled as the Border said in a statement: “The ABF can confirm that Mr Djokovic failed to provide appropriate evidence to meet the entry requirements to Australia, and his visa has been subsequently cancelled.

“Non-citizens who do not hold a valid visa on entry or who have had their visa cancelled will be detained and removed from Australia.”

Sources have stated that the 20-time Grand Slam champion tried to enter the country on the basis that he had recovered from a Covid-19 infection in the last six months, the grounds for his medical exemption, which was rejected by Australian Border Force.

According to The Age, Djokovic presented “minimal” evidence for his exemption, supported by just one doctor.

Border officials and the Victorian government asked the 34-year-old to produce more documentation but Djokovic was unable to.

Now, the world No 1 could be banned from Australia following the visa mix-up.

Australia’s federal law states that anyone whose visa is cancelled faces a ban on re-entering the country, lasting up to three-years.

It is up to Australian Border force to apply the bans, and The Age has noted it is unlikely to be given to someone who made an unintentional error, those bans can still be imposed on those whose visas were cancelled because they were “considered to be a risk to the health, safety or good order of the Australian community”.

They also reported that sources confirmed the government had not ruled out banning Djokovic from the country, depending on how things played out in court as well as the Serb’s next moved.

The 86-time tour title winner is currently being held in a quarantine hotel in Melbourne after his lawyers appealed the decision to cancel his visa and deport him.

With court now adjourned until 10am Monday local time, Djokovic is set to stay in the Park Hotel over the weekend, after Commonwealth government barrister Christopher Tran confirmed that Australia’s Home Affairs Minister Karen Andrews was not planning to oppose the injunction, allowing him to stay until the hearing concluded.

Judge Anthony Kelly has requested that the Serb’s lawyers file all of their evidence and submissions by 2pm on Saturday.

He also asked Andrews’ team to submit their own evidence by 8pm on Sunday.

Novak Djokovic speaks out after disqualification at US Open