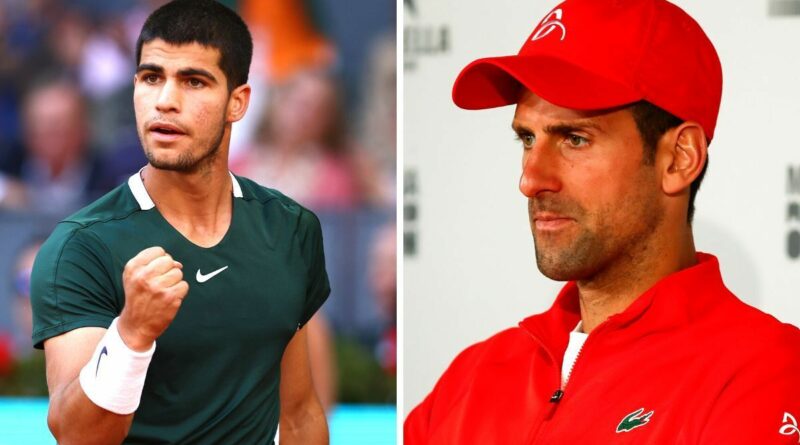 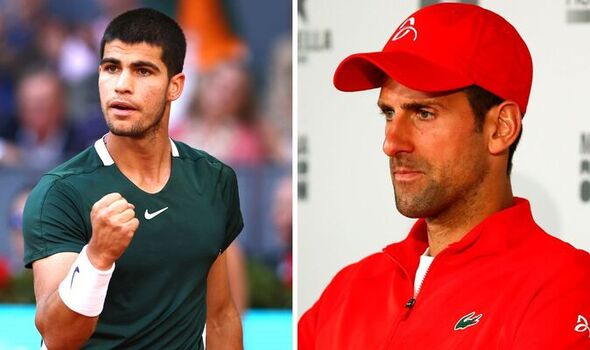 Novak Djokovic has been warned that Carlos Alcaraz can use the same tools as Roger Federer and Rafael Nadal to continue improving and eventually dethrone the world No 1. Greg Rusedski likened the Spaniard to Federer and Nadal during his Madrid Open final against Alexander Zverev.

Rusedski told Amazon Prime: “I mean he really has it all this kid. He says his hero growing up was Roger Federer and that’s the way he thinks his style is more similar to but he has the physicality of a Nadal but can really rifle through the forehand, he creates beautiful angles, great touch and can to the net.

“I mean there’s really no weakness in his game and he’s only going to get better with time and I think there could even be more accuracy on his first serve and second serve so the sky is the limit and the way he’s performed these first seven games is outstanding because the expectation here in Spain is huge, he’s expected to win this title.”

Alcaraz has shot up the world rankings to No 9 but his rise is set to continue after an impressive run at the Madrid Open, where he beat Nadal and Djokovic en route to the title. Alcaraz was dismantling second seed Zverev with relative ease in the final when Rusedski made his strong comparison.

Djokovic is the youngest member of the Big Three and is keen to maintain the old guard’s stronghold on men’s tennis. But Alcaraz is proving to be the biggest sign that the changing of the guard is near.

After losing to Alcaraz in the semi-final, Djokovic said: “Congrats to him. He held his nerve very well. For somebody of his age to play so maturely and courageously is impressive. He deserved to win.

“His kick in altitude here is huge, and it was just difficult to deal with his ball, and I wasn’t feeling my return from that side. He was serving a lot of kick just to put himself in a good position.”

‘How dare you’: Novak Djokovic reacts as Wimbledon crowd cheers for rival 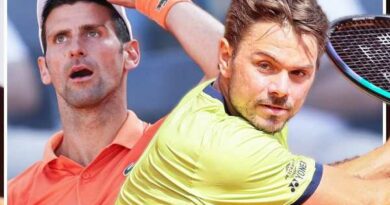