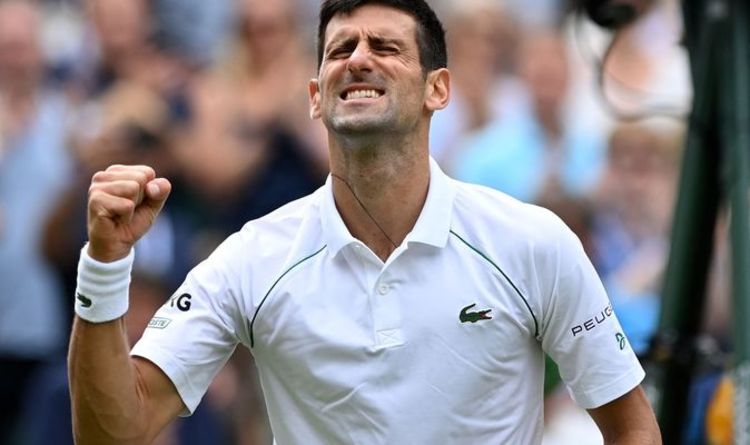 Novak Djokovic remains on course to match the Grand Slam record held by Roger Federer and Rafael Nadal after defeating Marton Fucsovics to reach the semi finals of Wimbledon, but there may still be some cause for concern. The world No 1 has certainly lived up to expectations at Wimbledon so far, not dropping a single set since his opening match against Jack Draper.

Fucsovics, competing in the quarter finals of a Grand Slam for the first time in his career, was always up against it in trying to cause an upset on Centre Court.

And other than a spirited fightback, albeit unsuccessful, in the first set, Fucsovics was struggling to challenge his opponent.

Djokovic looked calm and composed as he has done in the last few rounds, barely breaking sweat.

He eventually got the job done in straight sets for the fourth consecutive match of the tournament and took little over two hours.

JUST IN: Hubert Hurkacz feels advantage he has over Roger Federer in Wimbledon

Djokovic will face either Denis Shapovalov or Karen Khachanov for a place in Sunday’s final.

And the Serbian tennis superstar may well be hoping for a bigger challenge from either opponent.

Getting through the early stages of a Grand Slam with as little amount of time spent on court is often seen as a huge advantage heading into the second week.

Bigger challenges are to be expected in the latter rounds though, which can advertently help build up confidence.

Djokovic is certainly not lacking in that area as he’s made no secret of his desire to win the Golden Slam this year.

But he’s yet to be truly challenged at Wimbledon this year and a tough test in the final could well catch him by surprise if he comes through the semi final with ease.

Either Shapovalov or Khachanov should provide Djokovic with his toughest test of the tournament to date.

But there could well be more problems on the other side of the draw with Federer showing signs of his former self.

Djokovic has shown throughout his career that he’s more than capable of stepping up when it matters most.

So far, he’s sailed through to the semi finals without having to raise his game at all.

But his biggest test is yet to come and how Djokovic rises to the occasion will determine whether he can stay on course for the Golden Slam.

Bob and Mike Bryan announce retirement, days ahead of US Open