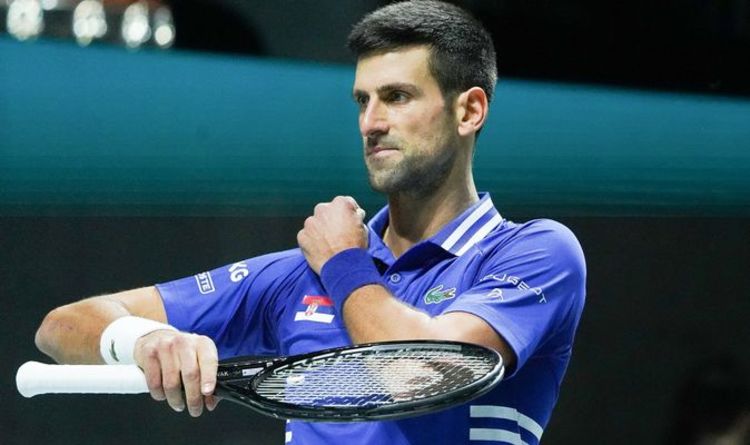 Djokovic’s return: Australian Open players are 'not so happy'

Novak Djokovic is preparing to appeal a second decision to have his visa cancelled in time for the Australian Open. The nine-time champion Down Under had his visa cancelled when arriving in Melbourne last week but won an appeal to overturn the decision on the basis of “procedural fairness”. Immigration Minister Alex Hawke still has personal powers to revoke Djokovic’s visa for a second time as the world No 1 does not have a valid medical exemption to be in the country, and the Serb’s team are gearing up to take the matter to court once again.

Djokovic had his visa cancelled after arriving in Australia last week with a medical exemption granted by Tennis Australia.

After being questioned overnight by border officials and failing to provide enough proof of his medical exemption when asked by both the border and Victorian government, the world No 1 had his visa cancelled and was taken to a government detention hotel for the weekend while awaiting his appeal hearing.

The Serb won his appeal and was allowed to enter Melbourne freely after the federal government conceded they had not given Djokovic enough time to contact Tennis Australia or get more proof of his exemption, but a prior Covid infection in the last six months – the basis on which Tennis Australia granted him a medical exemption – is not valid grounds for foreign nationals to be exempt from requiring full vaccination.

Immigration Minister Alex Hawke is now considering whether to use his personal powers to revoke the tennis star’s visa for a second time and have him deported.

JUST IN: Australian Open players told to boycott if Djokovic is allowed to play

Mr Hawke was expected to announce his decision earlier this week, but on Wednesday a spokesperson for his office said the world No 1’s lawyers had “recently provided lengthy further submissions and supporting documentation said to be relevant to the possible cancellation of Mr Djokovic’s visa.”

“Naturally, this will affect the timeframe for a decision,” they added.

An announcement on Djokovic’s visa was then expected on Thursday, ahead of the Australian Open draw ceremony which was due to take place at 3pm but went ahead more than an hour later with the nine-time champion included in the draw, while the Immigration Minister’s decision was then delayed to Friday.

In a press conference on Thursday, Australiam Prime Minister Scott Morrison also said: “I will refer to Mr Hawke’s most recent statement – that position hasn’t changed. These are personal ministerial powers able to be exercised by Minister Hawke and I don’t propose to make any further comment at this time.”

Now, it has been revealed that Djokovic’s team is planning to fast-track an appeal against a potential second cancellation of his visa in time for the Serb to compete in the Australian Open, which begins in just four days.

According to The Age, a souce close to the 20-time Grand Slam champion said his legal team were preparing to immediately take an adverse decision from Mr Hawke to court, hoping to have an appeal finalised by Sunday with the tournament starting on Monday.

Djokovic’s lawyers believe they will be able to fast-track the hearing by minimising the length of their written submissions and verbal evidence, looking to have the appeal heard over the weekend if the Immigration Minister cancels his visa on Friday.

Australian Open organisers are also said to be preparing contingency plans for a draw that did not include the top seed, after he was placed to play Miomir Kecmanovic in the first round.

A Liberal Party source, also speaking anonymously to The Age, said the government was strongly leaning towards making the decision to revoke Djokovic’s visa.

Depending on the timing of the announcement on Friday, it could leave the Serb’s lawyers with minimal time to appeal the decision if Mr Hawke cancelled his visa later in the day.

Meanwhile, Djokovic now faces investigations in two other countries as well as Australia over Covid breaches.

The 34-year-old admitted to breaking isolation rules in Serbia after testing positive in December, and also travelled to Spain after Christmas when the country does not let in unvaccinated travellers.

Novak Djokovic to play Adelaide International ahead of Australian Open