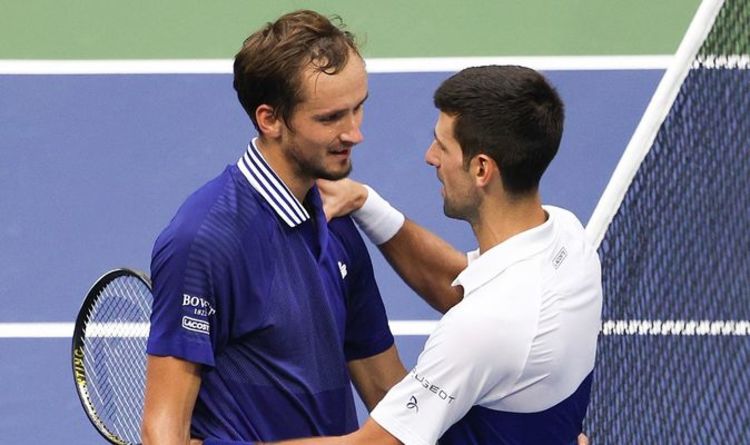 South African tennis star Lloyd Harris believes the time is now for the sport’s younger generation to take over the mantle from The Big Three in Novak Djokovic, Roger Federer and Rafael Nadal. His comments come after Daniil Medvedev secured a brilliant victory over the Serbian world No 1 in the US Open final.

Medvedev, currently ranked world No 2, saw off Djokovic – who was desperate to clinch what would have been a historic calendar Grand Slam – in straight sets during the Flushing Meadows showpiece.

But for the best part of 15 years, men’s tennis has been dominated by Djokovic, Federer and Nadal – who have all won a remarkable 20 Grand Slam titles each.

Incredibly, before Medvedev’s win, the trio had won a combined 60 of the last 72 Grand Slam crowns.

But Medvedev has now broken up their domination, and Harris believes it could be a difficult task for the great tennis trio to add to their respective tallies with the younger generation coming through.

JUST IN: LTA chief hits back at John McEnroe in Emma Raducanu row after US Open triumph

The South African himself rose 15 spots in the ATP rankings to a career-high No 31 after making it to the quarter-finals of the last Grand Slam of the year.

When pressed on whether cracks are beginning to appear for the Big Three, Harris replied: ‘Absolutely, it’s been coming for a while.

‘It’s been hard for the younger generation to just crack into those Grand Slams. Novak’s just been unstoppable until this very last match… I just think he came up against an extremely difficult opponent on the day.

‘Daniil played some really good tennis throughout the whole summer and [he] just kind of reflects this newer generation.’

TENNIS POLL: Will Djokobic lose out to Nadal and Federer? Can Raducanu copy Serena?

Djokovic’s dominance this year was also broken at the Tokyo 2020 Olympics, as Alexander Zverev overcame the Serb in the semi-finals before going onto claim gold himself.

And 24-year-old Harris highlighted Zverev’s and Medvedev’s success as examples that the trio’s time at the top is coming to an end.

He added: ‘There was Zverev winning the gold medal, Medvedev winning the other (Canadian) Masters in the summer… so this young generation is really coming through.

‘If you look at the top 50 now, I think there are more young guys in there than there’s been in the last 20 years.

‘It just shows you… Felix (Auger-Aliassime) had a tremendous run as well as (Hubert) Hurkacz got a Masters win in Miami, (Casper) Ruud winning three titles… so this new generation is really coming through nicely and these are all the guys that I grew up with. It’s incredible how we’re all within one year from each other, [born] between 1996 to 1998 almost, which is pretty incredible.

‘So, yes, I’ve known these guys for a long time, we’ve been competitive in the juniors already and it’s nice to see all of us progressing and now I think it’s time to kick out that ‘Big 3′ and let the younger generation take over.’