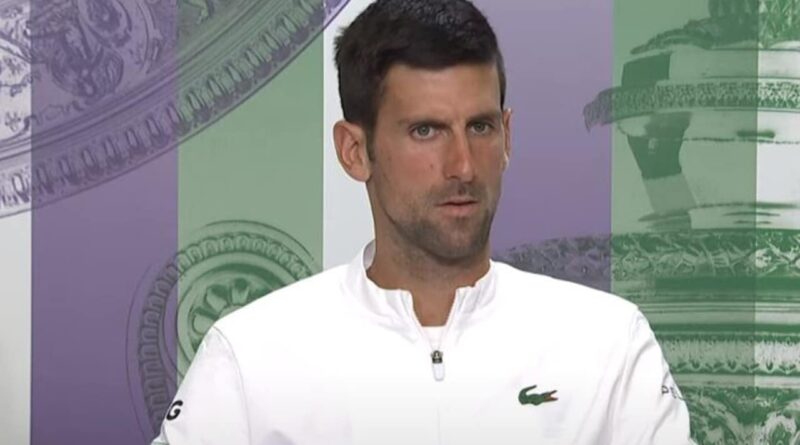 World No. 1 and five-time champion Novak Djokovic reached his 10th Wimbledon semi-final and 41st at the Grand Slams before facing down a journalist who asked him what it felt like being the “bad guy” of the sport.

Should he win a sixth title, Djokovic will go level with Roger Federer and Rafael Nadal on 20 major titles.

Despite his success, the Serb then faced the first questioner at his post-match news conference who asked “what has it been like to be something of the ‘bad guy’ chasing after Roger and Rafa all these years?”

“I don’t consider myself a bad guy. I mean, that’s your opinion,” said an unimpressed 34-year-old Djokovic after his 100th career grass court win.

“I’m not chasing anybody. I’m making my own path and my own journey, my own history. I’m privileged to be part of history of this sport that I love.

“As I said on the court, I know about a lot of stats. I don’t know about all of them. But they do motivate me even more to play my best tennis at the events that count the most in our sport.”

The question didn’t go down well with more than just Djokovic. Tennis reporter Ben Rothenberg called it “one of worst opening questions I’ve ever heard in a press conference”, while journalist and presenter Jon Wertheim also had a crack.

“There has to be a way — without compromising access — that this system is improved,” Wertheim tweeted, in response to Rothenberg’s criticism.

“This is the problem. It poisons the atmosphere for everyone, including the majority of journalists who are professionals.” 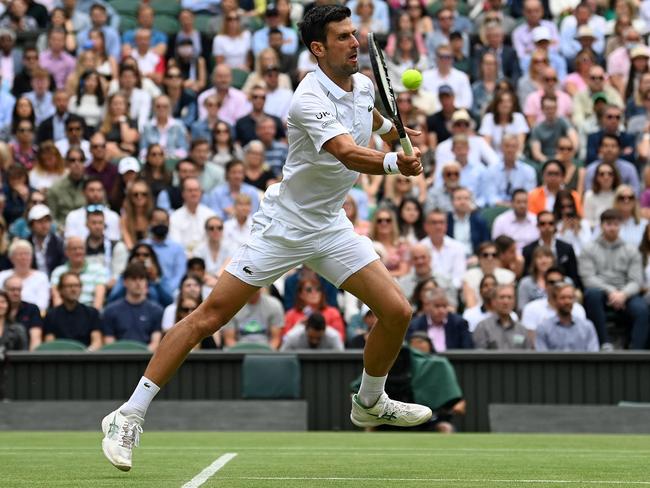 Djokovic is on track to win another Wimbledon title.Source:AFP

Djokovic will take a 6-0 career head-to-head advantage over 22-year-old Shapovalov into their match on Friday. The Canadian left-hander will be playing in his first Grand Slam semi-final.

“We played a tight two-set (match) this year in the ATP Cup, which was the first opening official match for him and I of the season,” added Djokovic.

“The courts at the Australian Open are pretty quick this year so I could get a little bit of an understanding of how well he’s serving, if he’s serving well, you know, how difficult it is to play against him.”

Djokovic became only the third man to capture all four majors more than once with his second French Open victory last month.

Now he is halfway to becoming the first man since 1969, and only the third in history, to complete a calendar Grand Slam of all four majors.

“I love this sport with all my heart, body and soul and have been devoted to it since I was four,” he said.

“Sometimes things do look surreal for me but I try to live in the moment and take every opportunity I have on the court.

“Going for history is a huge inspiration for me, let’s keep it going.” 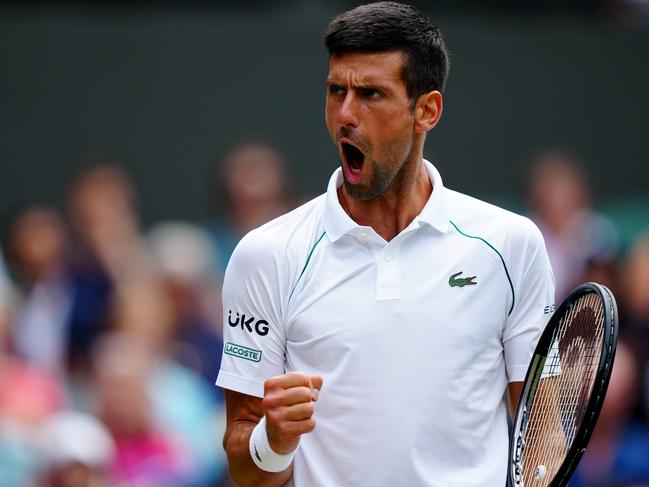 Can he go all the way?Source:Getty Images

Djokovic raced into a 5-0 lead in the first set before 29-year-old Fucsovics got on the board. The world No. 48, bidding to become the first Hungarian man since 1948 to make the semi-finals at Wimbledon, saved five set points.

However, the rearguard action was too late to prevent the champion edging ahead. The top seed broke for the only time in the second set in the ninth game which was enough for a two sets lead.

Djokovic had spent three hours fewer than the muscular Fucsovics in getting to the last-eight and his freshness showed when he crucially broke in the first game of the third set and then fought off two break points in the sixth.

“From one side it was pushing from the back and the balls didn’t come to me, so I had to go to the ball and try to play with more spin,” said Fucsovics.

“If not, the ball was flying away. From the other side, I felt that Novak put a lot of pressure on me. He put a lot of balls on the court. He didn’t want to hit a big winner, just to make me miss.” 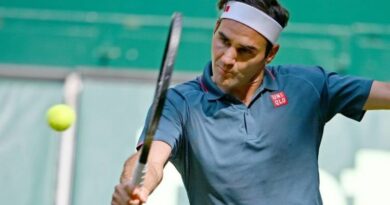