Home » Tennis » On the face of the ‘happy slam’, a forced smile

The so-called ‘happy slam’ begins with a frown on its face.

The prelude to the Australian Open has been turbulent as rarely before. It might be a first: a contest about sport in which everyone lost. To some extent, we’re all feeling that way after two trying years. “Open” is a word that resonates ironically. 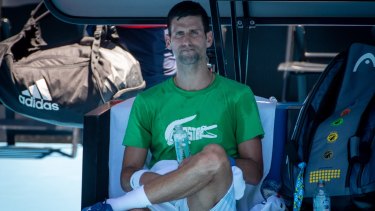 The last time Novak Djokovic will have been seen on an Australian Open court this year.Credit:Eddie Jim

The many grievous mis-steps have all been well ventilated here and elsewhere. Novak Djokovic, Tennis Australia, the federal government and the state government all have lost skin. All had agendas, and tripped over them.

Nine-time Open winner Djokovic could win it another nine times and not regain the favour that was always somehow qualified for him here anyway. For him, “court time” will never have quite the same blithely happy ring to it again.

Australia’s reputation and the good names of Victoria, Melbourne and the Open itself have been collaterally damaged. Whether the decision was for Djokovic to stay or go, it was going to create unrest. This way, it should die down sooner and allow the patching up to begin.

The Australian Open will put on a brave face when it opens its doors on Monday morning, but its underlying condition will be brittle. The promoters are tense. The players are divided. The public are bemused. The mood is downbeat. 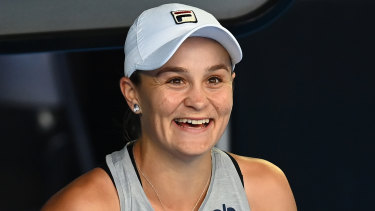 Ash Barty, the hope of the tournament now. Credit:Getty Images

Ticket sales have been slow. Whether that is because of a quasi-boycott of Djokovic or apprehension about Omicron no one really knows.

Authorities had looked upon a fully subscribed Open to be another peg in the ground on the path to economic, psychological and emotional recovery. But last week, the state government had to announce that crowds would be restricted to 50 per cent of capacity.

Half-empty stadia will diminish the sense of occasion now and deplete the coffers for a long time into the future. They still have not recovered from the hit they took last year.

The Open is down, but not out. American half-known Tennys Sandgren is one of a scattered few to suggest that the Open should be stripped of its hard-won and jealously guarded grand slam status. It won’t. The other majors have maintained silence, either diplomatic or timid, but are in countries that also mandate vaccines for visitors. Their D(jokovic)-days are coming. 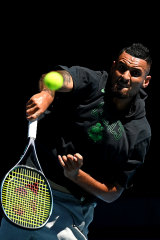 Others moot that players will snub the Open henceforth. They won’t. For one, more than 90 per cent of them are inoculated anyway, so Djokovic’s problem is not theirs. For another, major championships are worth so many more points in the rankings than workaday tournaments that to blacklist one would be to cut off your nose to spite your face. There is neither treatment nor vaccine for that.

In assembling its case for Djokovic, TA said that the tournament was imperilled without him. “The treatment of [unvaccinated] players … goes to the heart of the viability of the Australian Open,” said chief executive Craig Tiley.

This was specious nonsense. Tournaments make players, not players tournaments. Roger Federer, Serena Williams and Rafael Nadal all have missed Australian Opens in the last decade, and somehow it bumbled through.

“There is no player in history that’s more important than an event,” said the ever humble Nadal.

“No one. Not even Roger, Novak, myself, Bjorn Borg. Australian Open is much more important than any player. It will be great with or without him.” 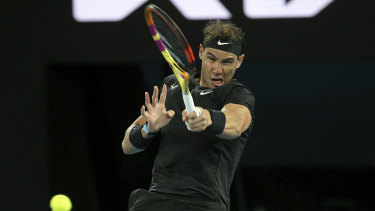 Rafael Nadal: no player is bigger than the tournament.Credit:AP

We knew that 40-year-olds Federer and Williams would be absent again this year long before the Djokovic imbroglio and there was no wailing and gnashing of teeth about Armageddon then.

Nearly everyone else is here. Ash Barty is, and that should be enough to put a smile back onto the Open’s face. She’s in ominous form, too. Naomi Osaka is here, seemingly with peace of mind.

Nadal is here. So are Alexander Zverev, Stefanos Tsitsipas and Daniil Medvedev, mens tennis’ long baulked Gen Next, all licking their lips. They’re not superstars yet, but nor was Djokovic once. They’re seeking to emerge from two shadows here, the long one cast by their eminent forbears and the other by the cloud over this tournament.

Nick Kyrgios is here, just. Bernard Tomic isn’t, but that’s the status quo now. He’s won only one match at the Australian Open since 2017. Thanasi Kokkinakis is here, at last. He’s a contemporary of Kyrgios for whom little has gone right, but arrives this time with his first tournament win newly stowed in his bag, and a salute from Federer and Djokovic. He’ll have a happy countenance. 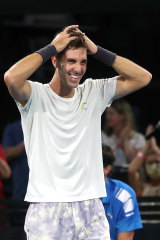 The preliminaries have been loud, angry and unhappy. But sport has a way of healing itself. That’s because it draws on a greater fund of goodwill than other pursuits, certainly politics. Goodwill has to be the curative now.

Besides, sports events are remembered by how they finish, not how they begin. You’ll all have your fantasy to nurture, but by finals weekend, when Rod Laver Arena is packed, night falls and contestants walk onto court, Djokovic will be a footnote. The geopolitics will settle, too. Australia v Serbia is hardly Australia v China.

Here’s one way of looking at the 2022 Australian Open: it’s a COVID victim. It ignored warnings, played a bit fast and loose, became feverish, submitted to a series of tests, spent time in isolation, but is through the worst and has good recovery prospects. It’s not as happy as usual, but it’s still our slam.

Kyle Edmund on pressures of being British No 1 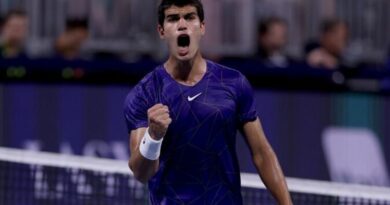