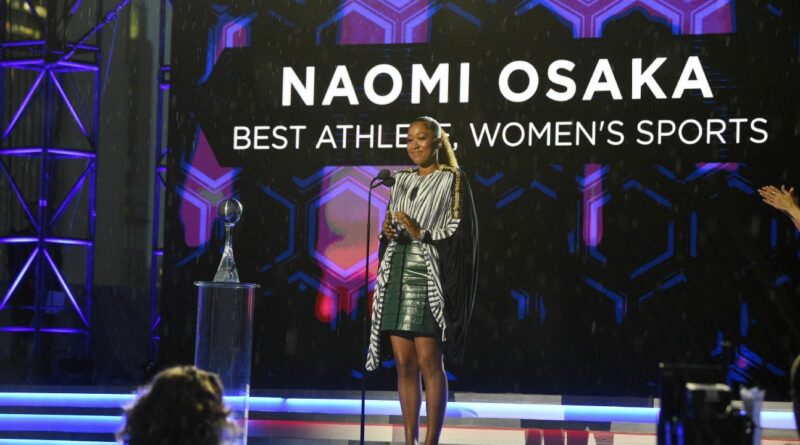 Naomi Osaka returned to the spotlight for the first time since withdrawing from the French Open in May and skipping Wimbledon, posing on the red carpet at The ESPYS on Saturday night.

The world’s highest-paid female athlete faced a slew of photographers in New York, with one being heard urging her, “Nice smile,” as cameras clicked furiously. Osaka offered a faint closed-mouth smile in response.

Osaka won as the best athlete in women’s sports at the annual show honoring the year’s top athletes and sports moments. It was moved to New York from Los Angeles this year because of the coronavirus pandemic.

Osaka, who has won four Grand Slam titles, pulled out of the French Open before the second round, saying she has “huge waves of anxiety” before speaking to the media and that she has “suffered long bouts of depression.” She also sat out Wimbledon. She’ll her return for the Tokyo Olympics, representing her native Japan.

Charlotte Hornets rookie LaMelo Ball won as best breakthrough athlete. The best game award was Gonzaga’s 93-90 win over UCLA in the semifinals of the men’s NCAA Tournament. DeVonta Smith, who won the Heisman Trophy at Alabama and now plays for the Philadelphia Eagles, won as best men’s college athlete.

Actor Anthony Mackie hosted the show from The Rooftop at Pier 17 at the Seaport. He singled out Scripps National Spelling Bee winner Zaila Avant-garde during his monologue. The 14-year-old from Louisiana is a basketball prodigy.

“This kid can do anything,” Mackie said. “She can hit a step-back like Luka Doncic and then spell Luka Doncic right the first time.”

WNBA player Maya Moore was to receive the Arthur Ashe Courage Award. Chris Nikic was honored with the Jimmy V Award for Perseverance. Last year, he became the first person with Down syndrome to finish an Ironman triathlon.

Johanna Konta pulls OUT of Ostrava Open due to coronavirus fears