Rome: Nine-times champion Rafael Nadal showed little signs of rust when he played his first match in 200 days as he beat fellow Spaniard Pablo Carreno Busta 6-1 6-1 in the Italian Open in Rome on Wednesday.

Nadal, who received a bye into the second round, has not played a tournament since winning his 85th singles title in Acapulco, having skipped the Western & Southern Open and the US Open in New York due to COVID-19 concerns. 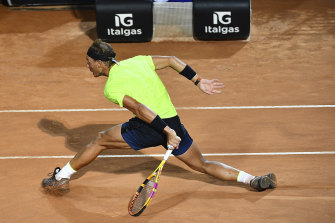 Spain’s Rafael Nadal returns the ball to countryman Pablo Carreno Busta during their second round match at the Italian Open.Credit:LaPresse

The match was also Nadal's first on clay in 465 days after his French Open triumph last year and the 34-year-old Spaniard sent an ominous message to the field as he dominated the US Open semi-finalist from the start at an empty Foro Italico.

"It's good to be back on the Tour but obviously the feeling is not the best playing without crowds," Nadal said. "At least there's one positive thing, the sport is back."

Nadal broke in the fourth game to take a 3-1 lead and did not look back, winning the last 10 points in the opening set to put down a marker for Carreno Busta who struggled with the pace of the ball on clay after two hardcourt tournaments.

The second set was more of the same as a visibly jumpy Nadal could not wait to get going between games and the world No.2 wrapped up the match in 73 minutes with 20 winners while Carreno Busta made 28 unforced errors.

"I played a good match, maybe he was a little bit tired from New York (where) he played an amazing tournament," Nadal added. "It's a perfect start for me, I played solid, some good shots with the forehand and backhand."

Italian wildcard Jannik Sinner pulled off a stunning upset in the second round when he beat third seed Stefanos Tsitsipas 6-1 6-7(9) 6-2 to take revenge on the Greek who beat him in straight sets at the same stage last year.

Sinner, 19, led 6-1 5-2 before Tsitsipas mounted a comeback and saved match points in the tiebreak, but Sinner clinched the decider as Tsitsipas racked up 58 unforced errors in the contest.

Sinner will next face Bulgarian Grigor Dimitrov, who eased past Yoshihito Nishioka 6-1 6-0.

‘That was all I was thinking about’: Kyrgios steps up for fire relief in winning start

Smith taking COVID serious in the IPL
We and our partners use cookies on this site to improve our service, perform analytics, personalize advertising, measure advertising performance, and remember website preferences.Ok