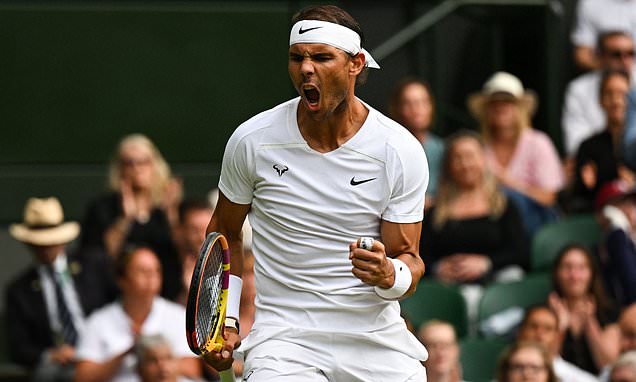 Rafa Nadal’s bid for a calendar Grand Slam stays on course after beating Lorenzo Sonego at a canter, sealing a straight-sets win in just 124 minutes

The temptation may have been to turn over to Court One to see whether a man really can moan his way into Wimbledon’s fourth round. A great many will have reached for that red button, too.

But those who stayed with Centre Court saw a different way to win. A calmer way, with Rafael Nadal’s display of relentless dominance ensuring the calendar Grand Slam remains a target.

Nadal let his tennis do the talking on Saturday evening, playing like a man with a dinner reservation in Wimbledon Village. The second seed won 6-1, 6-2, 6-4, taking the first set in 27 minutes, the second in 38, and the third in 59. 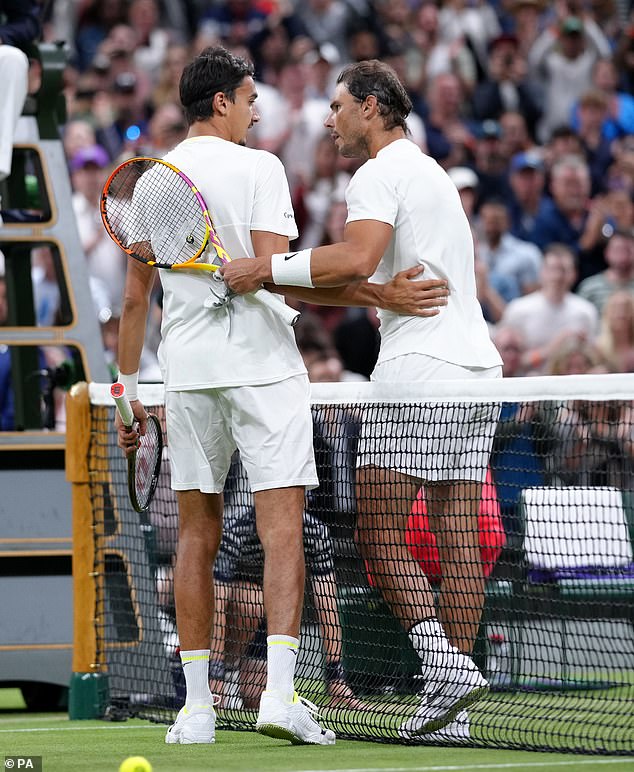 Lorenzo Sonego put up more of a fight the longer this match continued, though the result felt inevitable throughout. Not the most entertaining for the everyman – certainly not as unpredictable as watching Nick Kyrgios on his nearby court – but then Nadal isn’t one for controversy.

As heated as it got on Centre Court was when Nadal and Sonego had a few words with one another, the Italian’s loud and late grunting seemingly getting on the nerves of the Spaniard.

‘Not spicy at all,’ Nadal said afterwards of their 30-second conversation at the net. ‘Now I feel really bad if I bothered him, so I’m very sorry for that.’ 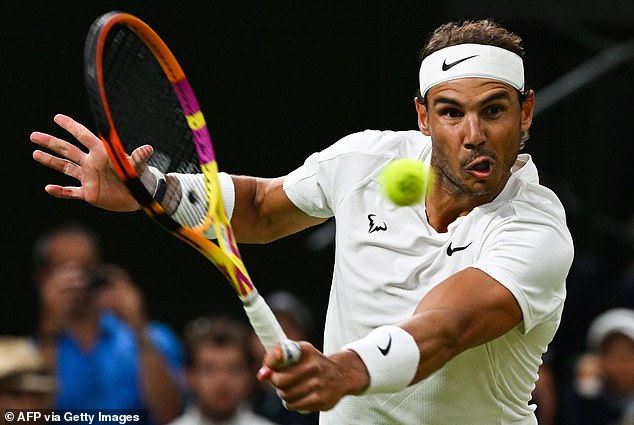 In that race to see who can win the most Grand Slams, Nadal is on 22 to Novak Djokovic and Roger Federer’s 20. It is remarkable that, at the age of 36, he remains such a picture of athleticism and is currently halfway to the calendar Slam, having won the Australian Open in January and French Open in June.

Now to Wimbledon, a tournament he hasn’t won since 2010. Whereas his first and second rounds weren’t the most straightforward, everything about this win was routine.

That’s the way Nadal likes it, too – planned and perfected. Much like his serving ritual – how he touches his backside as if unscrewing a wedgie, then his left shoulder, right shoulder, nose, left ear, nose again and right ear.

That’s the routine at work and rarely does it let down for this 22-time Grand Slam champion. Certainly 27th seed Sonego could not come close to upsetting it. 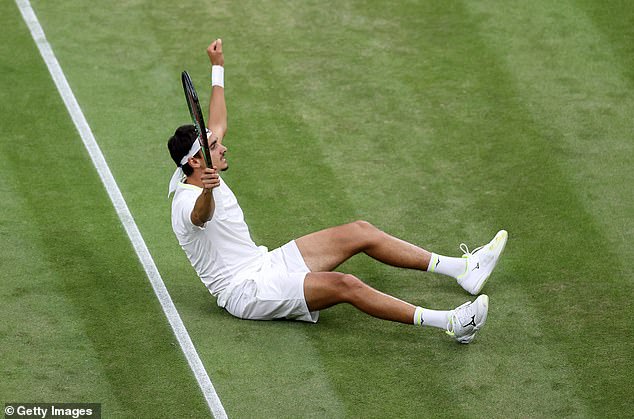 Nadal makes his opponents sing for their supper. He moves them from side to side at that baseline – as Sonego learned in this match’s opening game, his step-counter suddenly working overtime.

Nadal broke for 3-1, then again for 5-1, a double fault handing him that second break as Sonego’s nerves got the better of him. The fan favourite duly served out the set, then popped to the toilet, leaving his opponent to ponder what had just happened.

Nadal broke Sonego at the start of the second set, a stunning cross-court forehand leaving the Italian with no chance. He led 2-0, then 4-0 after another break of Sonego’s serve.

The Centre Court crowd – lovers of underdogs – suddenly changed sides. They were now Team Sonego, if only because they didn’t want this match to end before they’d had their money’s worth.

The man losing comfortably happily accepted their support. After holding his serve for 4-1, he raised his arms to receive the acclaim from his new fans. Nadal took the second set 6-2 regardless.

It was at this stage that the BBC decided to switch from this cakewalk to Kyrgios’s dramatic match with Stefanos Tsitsipas.

With Nadal leading 4-2 in the third set, Sonego complained to French umpire Renaud Lichtenstein, feeling it was too dark to play. The roof was closed and once underway, Sonego broke Nadal but was then broken himself, a small squabble about the Italian’s grunting ensuing.

It was not bad enough to distract the 36-year-old gunning for glory. Nadal defeated Francisco Cerundolo in the first round and Ricardas Berankis in the second, but saved his best performance of this tournament for Sonego in the third. Botic Van De Zandschulp, the 21st seed from Holland, is next.

Should Nadal win Wimbledon this year, he would become the oldest man to do so in the Open Era, besting Roger Federer’s record of 35 years and 342 days. You wouldn’t put it past him based on this dominant performance. 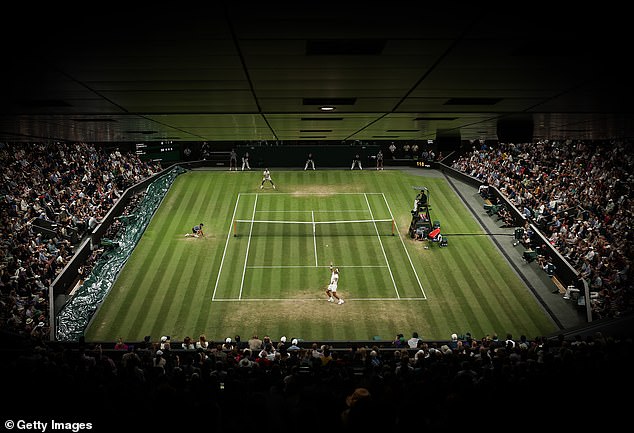 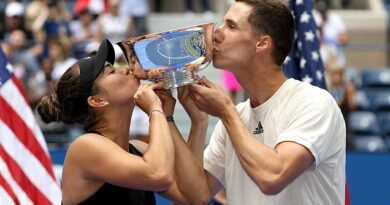