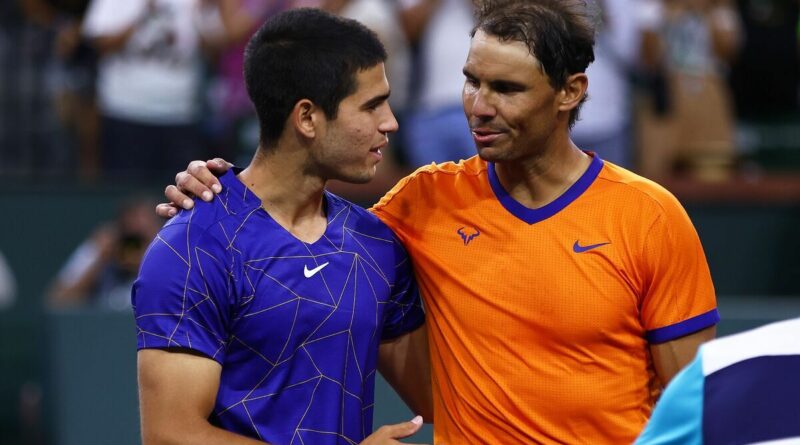 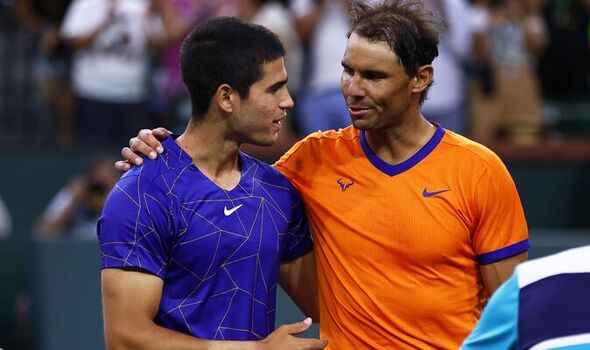 Alejandro Davidovich Fokina has questioned comparisons between his fellow Spaniards Rafael Nadal and Carlos Alcaraz. Alcaraz recently made history as the youngest man ever to win the Miami Open and has since been tipped for huge success, with everyone including the man himself pointing out the similarities between the 18-year-old and Nadal.

Alcaraz has long been known as something of a ‘mini-Nadal’ and the comparisons intensified after the 18-year-old became the youngest man to win the Miami Open, and third-youngest ever to win a Masters 1000 title. Even the 21-time Grand Slam champion has confessed that the teenager reminds him of himself at the same age, saying: “He [reminds] me a lot of things like when I was 17 or 18 years old kid. Carlos is a great guy and he is a potential No 1 player and multi-Grand Slam winner without a doubt.”

But another Spaniard has questioned whether the world No 11 will be able to reach the same lofty heights as Nadal, branding the 35-year-old a “God” of the sport. “He is a boy who has the characteristics to be number one,” Davidovich Fokina said of Alcaraz.

“I don’t know if he will reach the level of Rafa, he has been and is a God.” Davidovich Fokina recently continued Nadal and Alcaraz’s run of Spanish success in men’s tennis, reaching his maiden career final at the Monte Carlo Masters where he dispatched world No 1 Novak Djokovic in what was the Serb’s opening match.

JUST IN: Raducanu ‘miles away’ from potential as Becker slams early losses

While he wasn’t convinced by claims that Alcaraz would become as successful as Nadal, who currently holds the all-time record for most Grand Slam titles won by a male singles player with 21, the world No 27 admitted there was still a conversation to be had. “Carlos is a great person, a great player and at 18 years old he has won titles, there’s a lot to talk about,” he added.

Nadal was one of the first people to congratulate Davidovich Fokina for his run to the final in Monte Carlo over the weekend, sharing an Instagram post of the 22-year-old alongside champion Stefanos Tsitsipas. “Congratulations to @aledavidovichoffocial for the final on #MonteCarlo Great week!!!!” the world No 4 wrote with a series of applauding emojis.

Alcaraz is the only man out of the three in-form Spaniards in action at their home tournament in Barcelona this week. Davidovich Fokina withdrew after his run in Monte Carlo while Nadal is still sidelined from a rib injury he picked up in his Indian Wells semi-final win over Alcaraz. The 18-year-old is the bookies’ favourite to win the Barcelona Open in Nadal’s absence according to Bet365, even above recent Monte Carlo champion Tsitsipas.

The world No 11 will be hoping to bounce back after a narrow three-set defeat to Sebastian Korda in his opening round of the Monte Carlo Masters, as he said: “I don’t come here disappointed with what happened in Monte Carlo, but with things clear and knowing what I can improve on.”

Tennis: Murray in too much pain to carry on

‘There’s a lot more in life: Wozniacki to retire after Australian Open 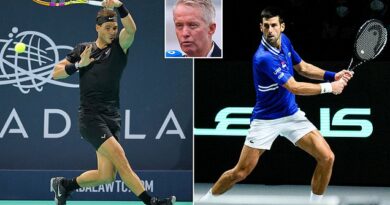