Djokovic ‘cleared out of the way’ for Nadal says Webster

Rafael Nadal has been urged to manage his recovery in the wake of his Australian Open victory over Denis Shapovalov on Tuesday morning. The former world No 1 had to dig deep to make the semi-finals of the competition. Yet he managed to do just that and, now, is just two victories away from a record 21st Grand Slam.

Nadal had stomach issues and appeared to be struggling with the Australian heat against Shapovalov.

It was a gladiatorial performance from Nadal, who last won the competition when he beat Roger Federer way back in 2009.

And Lindsay Davenport thinks the Spaniard must now be careful when it comes to his recovery if he’s to end his wait for a second crown Down Under.

“He looked so good throughout the tournament, didn’t play his best in the third and fourth sets but found his way in the fifth.

“It is all about recovering, he has plenty of time to recharge.

“It is amazing to see him at this tournament, we weren’t sure what we would see after his foot injury.”

Nadal admitted he was ‘completely destroyed’ following the win at the Rod Laver Arena.

And he admitted it meant the world to him to make the last four of the competition.

“I don’t know, honestly I was completely destroyed!” he said.

“A very tough day, very warm, I didn’t practice for it.

“I had my chances at the beginning of the third, I didn’t get it and then started to feel a bit more tired and he pushed me. For me it is amazing to be in the semi-finals.

“I started to feel not very well in my stomach so I asked for something, they took the tension, checked everything was all right in my body and some tablets to try and improve my stomach – so I think I was lucky I was serving great in the fifth.

“I am not 21 anymore, after this match it is great to have two days off.

“I felt quite good physically in terms of movement but the conditions haven’t been that hot.

“For me it is everything to be able to play one more time in that semi-finals match.

“We can create history but the real truth is two months ago we didn’t know if we would be back on tour at all.

“So it is just a present of life I am here playing tennis again and enjoying it.”

Nadal has lost four Australian Open finals since last winning the competition in 2009. 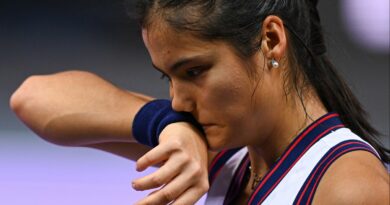