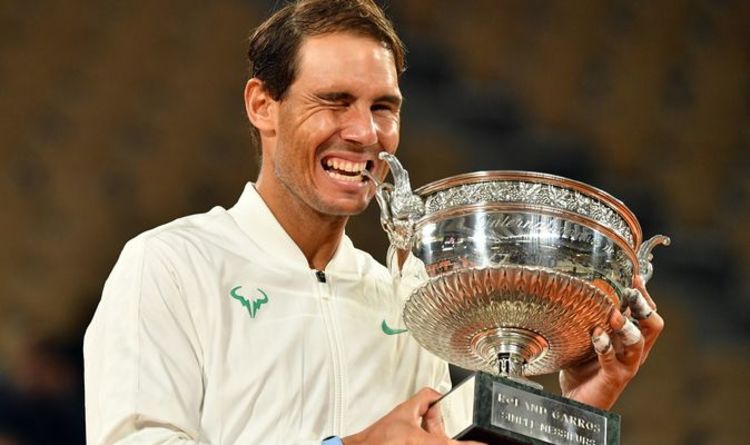 Rafael Nadal has been tipped to win multiple Roland Garros titles in the future, despite his recent injury woes. The Spaniard ended his 2021 season early to recover from a left foot injury, and is set to make his comeback at next month’s Mubadala Words Tennis Championship exhibition. Now 35 years old, he has been backed to add to his collection of 13 French Open trophies.

Nadal has barely played since he suffered a shock semi-final defeat at the hands of Novak Djokovic at this year’s French Open.

The 13-time champion in Paris later revealed he had aggravated a previous foot injury during his loss on the clay courts, and shut down his season following a short-lived comeback attempt at the Washington ATP 500.

He has now confirmed his comeback, and will be competing at the Mubadala World Tennis Championship exhibition in Abu Dhabi next month before kicking off his 2022 season at the Australian Open.

Now one former top player has predicted that the world No 6 will still win multiple Roland Garros titles in his comeback.

JUST IN: Mount claims he can beat Raducanu at tennis in hilarious TikTok video

“If he stays healthy, he could end up winning one to three more French Opens,” retired doubles sensation-turned-pundit Patrick McEnroe said.

“That’s a reasonable argument to make. It’s harder to make an argument that he can win multiple other majors at this point.”

Fellow ESPN analyst Brad Gilbert agreed, branding Nadal the favourite at the tournament he is a 13-time champion at.

The former world No 4 added: “Rafa is the favourite going into Roland Garros every year, and he will be until somebody beats him there.”

Following the 20-time Grand Slam champion’s recent injury troubles, not everyone is convinced he can be as dominant at the French Open anymore.

Jimmy Arias remained hesitant to tip Nadal to win more titles on the Parisian clay, but admitted that the Spaniard had always been able to prove him wrong and win at his most successful Grand Slam.

“I’ve often felt like Rafa is on the verge of being beatable, but then he’d get to Roland Garros and win,” the former world No 5 said.

“He proved me wrong every time a lot of times. But now he’s showing some wear in that armour.”

Speaking before he was confirmed for the mid-December exhibition event in Abu Dhabi, Nadal shared his comeback plans and gave an insight into his recent practice sessions.

“My plan is to play Abu Dhabi in December and then in a tournament before Australia and then the Australian Open. That’s my goal. We’re working hard to make it happen,” he said, just says before Mubadala World Tennis Championship organisers confirmed he was joining the lineup.

“I don’t know exactly when I’ll be back. But I can say that my goal is to try to come back to Abu Dhabi in December, and then, of course, for the start of the new season in January.”

Touching on his recovery from the foot injury that kept him out of Wimbledon, the Olympics and the US Open, the Spaniard added: “The injury in my foot still needs to get a little better, but I’m already training almost an hour and a half a day so that’s positive.

“Some days are better than others, but I’m starting to have a lot more positive days than negative ones. So I’m on the right track. I’m training, I’m feeling better. I’m back on the court.”

After smoke and storms, Open organisers hope for a break in the weather

Djokovic to face Medvedev, Zverev and Schwartzman at ATP Finals